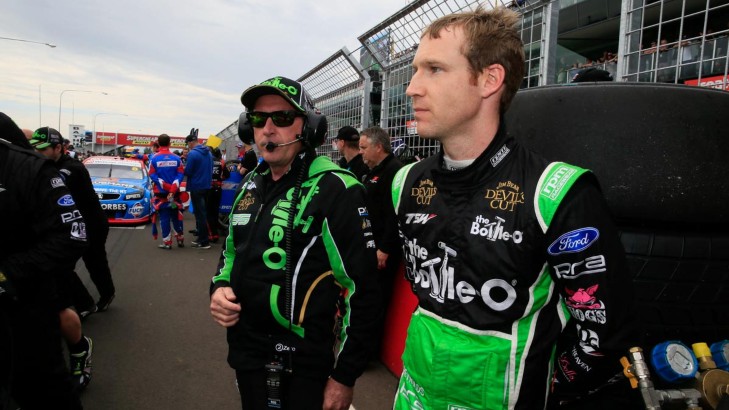 Prodrive Racing Australia has confirmed race winning driver David Reynolds will not remain with the group for the 2016 season.

Much speculation has surrounded the team's Rod Nash Racing 'third seat' with Reynolds telling v8supercars.com.au on Monday he was "reading between the lines" that there was no place for him at the team next season.

Prodrive-contracted Dunlop Series front-runner Cameron Waters is expected to take the seat, and will steer the Pepsi Max FG X in Chaz Mostert's absence this weekend at the ITM 500 Auckland.

Reynolds will continue to drive the #55 The Bottle-O PRA Ford for the remainder of the current season.

"We have been discussing next season with Dave and as we were not yet in a position to confirm if we will have a place for him, he asked to be allowed to explore the possibility of driving for another team in 2016," said Rod Nash Racing Team Principal Rod Nash in today's statement.

"He appreciates our position and we also understand his, but whatever happens everyone in the team is supportive of Dave securing a good position for a 2016 drive as he has fitted in well during his four years with the whole PRA team while driving The Bottle-O #55 car.

"Dave is a great character and can turn on the funny charm at times which makes him easy to get along with. He also takes his racing seriously and it has been great for him, especially in 2015, to really show his great capability as a front-running driver."

Reynolds has driven for the team since 2012 and has enjoyed the most successful chapter of his career, winning two races, claiming six pole positions and is chasing a podium finish in the 2015 Championship.

"The team knows racing is my career so I need to give myself the best chance of having a drive next year and beyond," Reynolds said.

"I have been hanging out to try and stay at Prodrive Racing but there are so many factors that go into these things and I appreciate they aren't yet in a position to confirm whether I am staying or not. We both know where we stand so there are no hard feelings."

It has been a tumultous year forReynolds, 30, whowas publicly told at the start of the year he needed to improve if he wanted to remain with the team.He went on to earn his second career race win in Darwin, and scored ARMOR ALL Pole Position at Bathurst, butwasfined $25,000 by V8 Supercars at Mount Panorama after an inappropriate comment about all-female entry the Harvey Norman Supergirls.