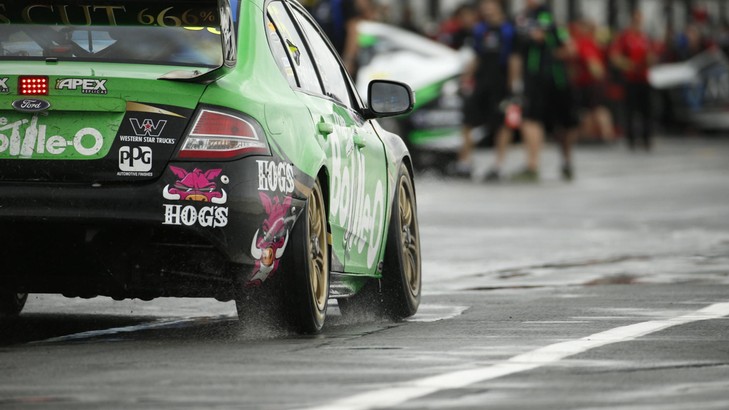 Shocked by his poor 2014 results, David Reynolds has decided to forget about Championship goals and go back to basics in search of speed.

Reynolds, 28, was expected to emerge as one of the stars of the category after breaking through for his first V8 Supercars race win at the Armor All Gold Coast 600 late in 2013.

But the Bottle-O Ford Falcon FG II driver has rarely ventured into the top 10 in 2014 and sits 14th in the Championship.

His dramas have been reflected by the struggles of all four cars that are run out of Ford Performance Racing, which also includes the two Pepsi Max Falcons of Mark Winterbottom and Chaz Mostert and the Jeld-Wen Ford of Jack Perkins.

Reynolds was 13th fastest after Friday’s practice for the Winton 400, with two 10-minute qualifying session and two 100km races set for today (Saturday).

The event is completed by another qualifying session and a 200km mini-marathon on Sunday.

Reynolds told v8supercars.com.au he and engineer Nathaniel ‘Ossie’ Osborne had changed course after the Formula One Rolex Australian Grand Prix.

“Myself and Ossie sat down and we just decided to go about our own business for a bit,” Reynolds explained. “People get too caught up in focusing on the results and they forget about the process.

“We need to think more about the process to get to the result we want. So we are just taking a step back and looking at it.”

Reynolds said it had been a “big shock” to arrive at the season-opening Clipsal 500, be faster than in 2013 yet further down the grid.

“Other teams have worked hard over summer whereas we probably had a break,” Reynolds revealed. “There are also the usual parity dramas and there is always things going on behind the scenes that you don’t really understand and have no control over.”

The Falcon drivers have consistently complained of rear wheels locking under brakes since two degrees was trimmed from the car’s rear wing angle before the 2013 season.

“We are taking steps to help that. It’s part of the problem but there are others we can improve on; our mid-corner speed and our drive grip and our engine speed,” said Reynolds. “To win races consistently you need all aspects of your car working well.”

A new setup direction was devised and introduced in both Reynolds and Perkins’ cars at the Tyrepower Tasmania 400 last weekend and drew immediate indications of improvement. Reynolds twice qualified in the top 10 and finished Race Five in 10th. Perkins posted a season-high eighth in the same race.

“It’s only a very small part but it’s working, now we are working on more new ideas,” Reynolds said.

Reynolds said cutting practice times as a cost cutting measure at events had hurt the pace at which the FPR cars can be developed, while the tight nature of the calendar meant there was no chance of a team test until May.

Reynolds praised FPR and The Bottle-O team owner Rod Nash, whose understanding of his slow start to the season was helped because he was a former racer himself.

Pre-season Nash had called on Reynolds, entering his third season in The Bottle-O Ford, to improve his consistency for 2014.

“Rod knows what we are trying to achieve and he backs everyone,” Reynolds said. “He has raced before and he understands it. He knows when the car is no good you can’t do your job.”

The V8 Supercars are on-track from 11am local time for qualifying.