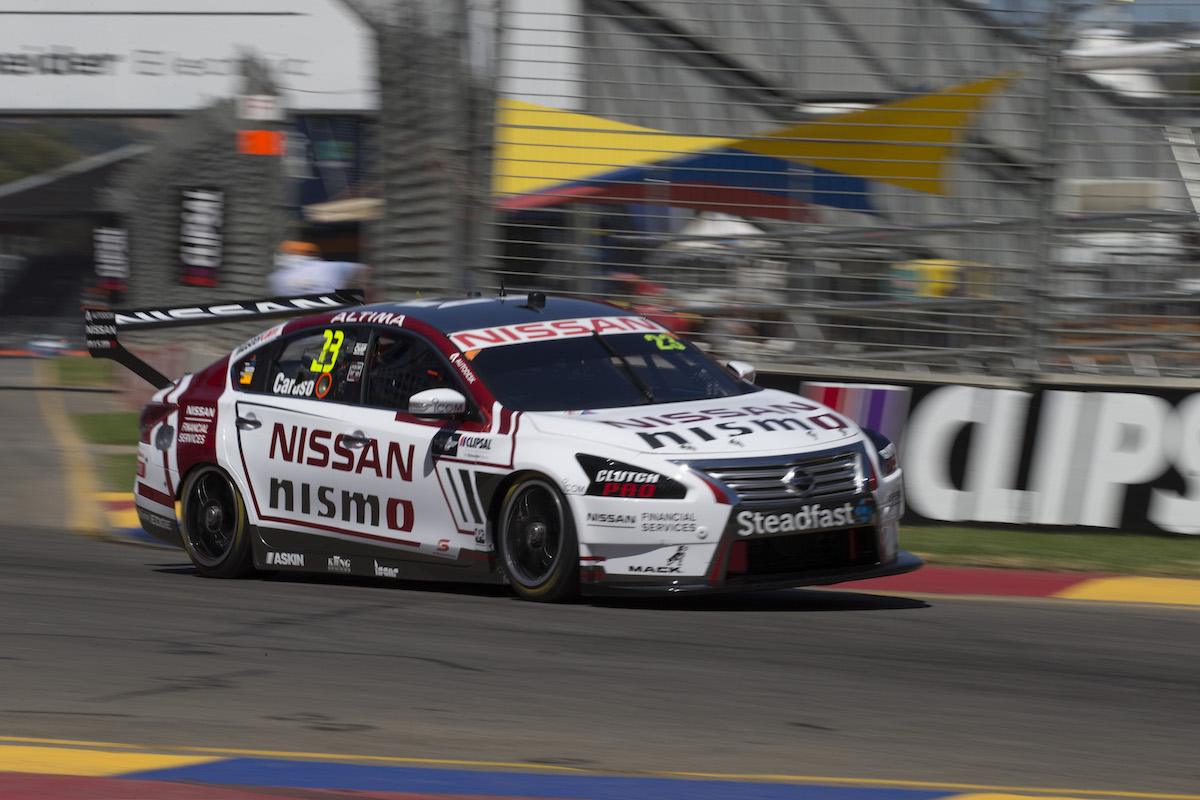 V8 Supercars drivers’ championship leader Michael Caruso believes his position is a reward for the factory Nissan Motorsport team’s massive efforts over the last four years and a motivator to keep working hard.

The 32-year old heads to this weekend’s Tyrepower Tasmania SuperSprint in his Nismo Nissan Altima with a 15-point lead over Red Bull Racing’s six-time champ Jamie Whincup eked out of a tumultuous Clipsal 500.

It is the first time Caruso has led the V8 Supercars championship pointscore.

“There are a lot of good things that came out of Clipsal and one thing is it really pushes people,” Caruso told v8supercars.com. “We are here, we have an opportunity, let’s try and grab hold of it and try and keep up with everyone the best that we can.

“It’s clearly a good stepping stone to move off not just for me but for the team, for all their hard work that’s gone on in the background the last four years.

“We obviously are headed in the right direction and we have a bit of self confidence because it’s not just what I do, it’s such a combination of a massive group of people and the work they do day-to-day that makes a difference come each weekend."

Caruso and his long-time engineer Steven Todkill have been with Nissan Motorsport since its first race in 2013. Owned by the Kelly family, the team designed, built and developed its Altima racers and the VK56DE engine for V8 Supercars racing essentially from scratch.

Late 2015 engine upgrades have played an important role in the Altimas stepping up to a new level of competitiveness.

“The car is good,” Caruso said. “Clearly there is room for improvement but I feel my understanding or the way I set the race car up is paying off not just for me but the other guys (team-mates Rick and Todd Kelly and Dale Wood) as well.

“They seem to be able to use it and benefit from it, which is good. I guess we are all working together to move forward because that’s a big part of of development and continually getting new parts and development parts to help us move forward.

“To have them on the same path as me is good … like anything it comes down to time and money and personnel to keep up with the rat pack at the front who are constantly developing.

Caruso made it clear he isn’t about to make any bold predictions about how the championship will unfold, but he certainly appreciates the position he and the team find themselves in.

“With the team-mates that I have; Rick Kelly has won the championship and Bathurst and he is a very accomplished driver and someone who is rated extremely highly up and down pitlane. To be using the same equipment and to be at the head of our group and the whole field it feels great.

“It is not something I am taking lightly, but I am not sitting here saying I am going to win the championship.”

Nor is he willing to speculate how the Altimas will perform at Symmons Plains, a track where they have traditionally struggled.

“We are definitely in a better position than we have been in the past, there is no doubt about it. But Tassie is probably one of the handful of tracks we go to that is so unique.

“But if we go there and step up from where we have been in the past it’s going to be better because we know what we lacked in the past there.

“It will be tested when we get out there in the first practice session and I think we’ll know exactly where we stand.”

Caruso’s championship position is a complete reversal from 2015 when he emerged from the first day of the Clipsal with negative points – after being penalised for an incident with David Reynolds – and a wrecked car after hitting the wall at Turn 8.

“That was really hard to come back from championship-wise throughout the year,” Caruso reflected. “We have always had fast cars and been fast at Clipsal but have never seemed to come away with any glory.

“So to come away with a round win is massive. I feel like it’s been a long time coming. Now the key is to better that and just keep working.”