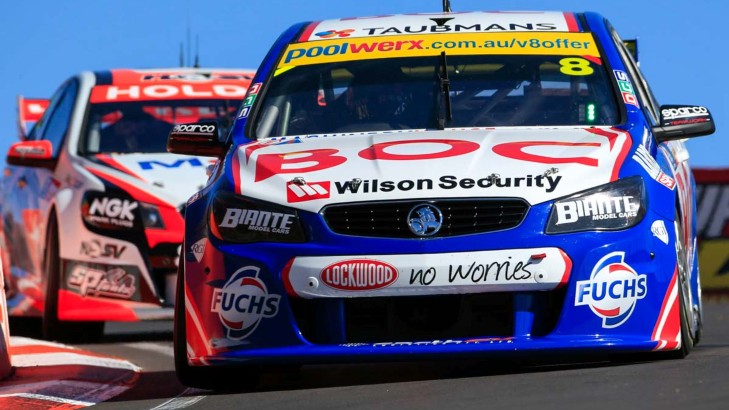 The new surface at Mount Panorama will play a key role in determining the winners of today's Supercheap Auto Bathurst 1000.

That's the prediction of 1998 winner Jason Bright, who starts fourth in the Team BOC Holden Commodore VF with Andrew Jones and says the list of potential winners is "more open" in 2014 than in years.

And naturally, he includes himself and Jones in that list.

"I feel like we have as good a package as we ever had going into this race, competitiveness-wise," Bright told v8supercars.com.au.

The new surface has proved fast but difficult to tune cars into and has contributed to several leading drivers including Jamie Whincup, David Reynolds and Garth Tander having major accidents during practice and qualifying.

Bright, who is making his 18th start in the 1000km classic, says the race will introduce several new variables, including longer runs than the V8 Supercars teams have been able to simulate in practice and qualifying sessions.

"I think race-pace wise it is hard to know what is going to happen because this surface is brand new," Bright told v8supercars.com.au. "I don't think anyone has done a really long run to see what's going to happen after 15 laps with the tyres."

"We don't know what's going to happen with the track surface, whether it is going to hold up. It is very slippery off-line - we already know that."

Bright also made the point that if the difficult surface triggers more crashes that will mean more safety cars, affecting strategy.

"I think we will have more safety cars. It (the surface) is catching people out, it is not hard to be caught out. It is unbelievable how slippery it can be off line. They are the sort of crashes that will happen, silly little ones."

The changing characteristics of the track surface as more rubber is laid down and it heats up during the day will trigger setup changes during pit stops, which means cars could get on the pace and drop off it just as quickly.

"I am sure people will make changes on the fly," Bright predicted. "You will see damper adjustments trying to make it better. You will see more changes than normal.

"That can mean someone isn't very strong at the start of the day and the track might come to them or they might get it right and at the end of the day they have the car to beat."

"It is going to be an interesting race and more wide open than other years."

It is easily the best qualifying effort at Bathurst for BJR, which is yet to win the race. Team co-owner Brad Jones also never won the race as a driver despite coming close several times.

"I feel like we have the ingredients we need to stand on the podium," said Bright.

"It's just about making sure we are in the right spot at the right time at the end of the day with a good, straight car and a quick car that we can get back to the front if we have to, or hold off anyone who is coming on strong."