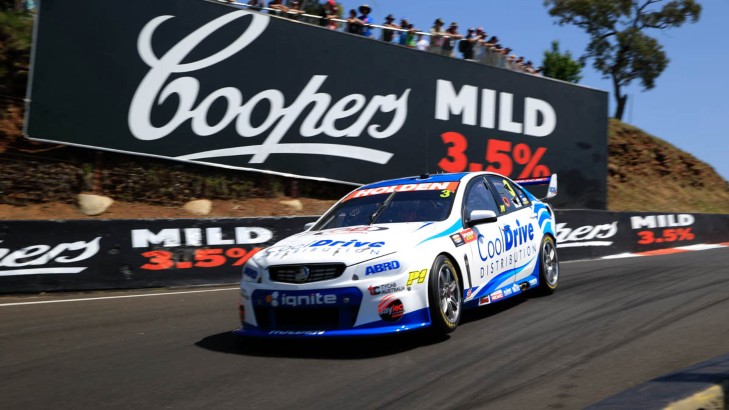 Blanchard hit the wall on lap 78 of the Supercheap Auto Bathurst 1000, ending a difficult weekend that never seemed to go his and co-driver Karl Reindler's way.

The #3 CoolDrive Commodore was repaired after Blanchard clipped the wall at turn one in practice on Thursday; and early in the 1000km race Reindler was handed a drive-through penalty for involvement in a crash that ended Super Black's day.

The LDM car was running 17th before crashing out and now the team will use Munday's chassis for the Gold Coast and most likely, the remainder of the year.

This isn't the first time the team has used Munday's chassis, which he keeps as a collector's item, as Russell Ingall's last V8 Supercar.

"So we'll go back to that and arrange with Phil to lease that probably for the balance of the year."

Last year the team was in a similar predicament heading into the Gold Coast and leased a Garry Rogers Motorsport Commodore, but found it difficult to work on, given LDM runs Triple Eight-built race cars.

Blanchard started the year with Munday's chassis, but switched to teammate Nick Percat's repaired car from Darwin in June.

Percat inherited TEKNO's old chassis for the Tasmania round and remainder of the season after troubles at the Grand Prix.

LDM will ultimately repair Blanchard's crashed car and ensure there is a spare chassis for next year, which has a tight calendar similar to the one week on, one week off structure faced from Bathurst onwards this season.

"We're making enquiries at the moment for a new car for next year," Hay said.

"The other one (#3) - we have to have a proper look at it, but there's so much damage, structurally, inside.

"If the damage stayed outside the box, the actual cabin, not a big deal. The way these cars are you just cut that bit off... but what's happened is it's compressed everything inside the cabin, so that's not ideal.

"Because of the way they're built, nothing is irreparable.

"I'd say we'd get it fixed eventually, and make that the spare car ... each car almost needs a spare car [next year]."

Hay was surprised to see the race end the way it did for car #3, saying Blanchard has never been a 'crasher'.

"Tim's car was stripped by [Tuesday]night and there's a humungous amount of damage to pretty much everything, considering Tim wiped out all the suspension components in the front right and rear on Thursday in his crash.

"It's taken everything off the right again, so we don't have a right hand anything at all.

"But we can't complain because 'Blanchy' never crashes ever -he just doesn't - so to have two reasonable ones in a weekend is just unheard of with him.

Blanchard and Reindler achieved season-best results at the Wilson Security Sandown 500 last month, finishing eighth and staying out of trouble.

Blanchard revealed he had been going to great lengths in attempt to improve his racing and performance, and did not want to sit out of the main game again, as he had to in 2014.

V8 things we learned at Bathurst