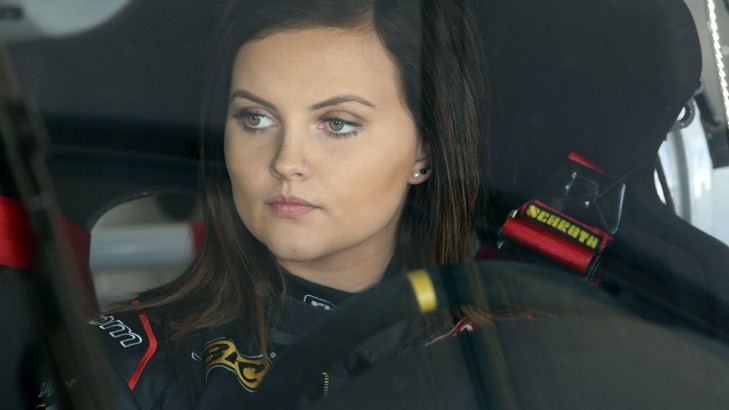 19-year-old racing driver Renee Gracie will enter the world of V8 Supercars in 2015 when she progresses to the Dunlop Series.

Confirmed today at Bathurst, Gracie will make her debut in V8 Supercars' official development category with the backing of long-time major sponsor, Fujitsu General. Further details of the program, including the team Gracie will be driving for, will be forthcoming.

Gracie will become the first female to contest a full season of the series since Leanne Tander (nee Ferrier) in 2001, while the announcement also marks a return to the category for Fujitsu for the first time since current star Scott McLaughlin won the Dunlop Series driving a Fujitsu-sponsored car in 2012.

The move to the Dunlop Series is the next step in a multi-year program aimed towards Gracie ultimately becoming the first female to race full-time in the V8 Supercars Championship.

For the past two seasons, Gracie has competed in the high-profile Porsche Carrera Cup Australia following a career in karting where the Queenslander raced among Australia's best.

Gracie's performances in the competitive all-Porsche series have continually improved, and in 2014 she has finished every race so far and registered four top-10 finishes, including a best result of sixth.

Gracie says that she is realising a dream by entering the V8 Supercar ranks.

"Ever since I started racing in karts, I have always dreamt of racing a V8 Supercar. To now be stepping up to the Dunlop Series is hugely exciting and a wonderful reward for my sponsors and a number of people who have put their faith and support towards my ambitions.

"I have no doubt that the Dunlop Series will be another big step in intensity and competition, but I am ready for the challenge and feel that two seasons in Porsche Carrera Cup has given me an invaluable opportunity to learn and develop. I am also proud to be flying the flag for females in V8 Supercars, and hope it is the start of more female racers breaking into this level of the sport."

Philip Perham, Deputy Managing Director of Fujitsu General (Aust. Pty Limited), is delighted to be extending Fujitsu's association with Gracie into the Dunlop Series. Australia's leading air conditioning brand has supported Gracie since she was an inaugural member of the Fujitsu "Cool" Driver Program back in 2011.

"Fujitsu General has been a supporter of Renee since she was selected as one of our 'Cool' Drivers when she was just 16. To support her since that time and see her development in Carrera Cup over the last two years in particular, has been very satisfying. Renee has always represented our brand professionally and enthusiastically and is a terrific ambassador for our company.

"We are delighted that Renee will be stepping up to V8 Supercars and the Dunlop Series for 2015 and look forward to watching her career go from strength to strength. Renee's story is as inspiring as it is unique and all of us here at Fujitsu General look forward to this new and exciting chapter as her primary sponsor."

Gracie's move also has the support, and keen eye of, two of the sport's most influential figures.

James Warburton, Chief Executive Officer of V8 Supercars Australia says, "It's great to see Renee stepping up to the Dunlop Series for 2015, and I congratulate her on this achievement. Renee displays a great combination of determination, focus and skill in the car. We wish her the best of luck and hope to see her in the V8 Supercars Championship at some point in the future".

"I am extremely pleased to see Renee making the step up into the 2015 Dunlop Series. She's shown excellent progress this year and will undoubtedly be a great asset to the V8 Supercar community. I wish her well and look forward to her competing in the main series down the road."