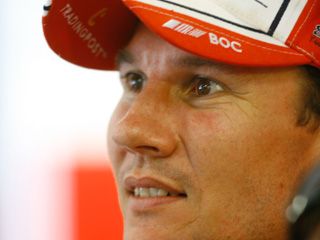 TODAY – December 15 – is exactly one year to the day that the inspirational Jason Richards passed away.

Over the last 12 months, much has been written and said about the gutsy Kiwi, who was only 35 when he lost his brave battle with the rare form of cancer known as Adreno Cortical Carcinoma (ACC).

Put simply, the bright and bubbly Kiwi has left a massive hole in the V8 Supercars Championship paddock, his absence this year felt by all who had previously came into contact with him.

The V8 Supercar family honoured him this year in a moment of silence at the season-opening Clipsal 500 in Adelaide and in his native New Zealand at the ITM400 Hamilton.

Drivers in the V8 Touring Car Series for ex-V8 Supercars also remembered the three-time Bathurst 1000 runner-up all season, repainting their cars in the same Tasman Motorsport and Team Dynamik liveries in which Richards had previously raced them.

With the backing of his wife Charlotte and parents David and Pauline, a book covering Jason’s career and inspiring life story has also recently been published to assist with raising funds for his young daughters Sienna and Olivia and their Education Trust.

Click here for more details on the book (note that orders for Christmas have closed, but deliveries will re-commence in January 2013).

Bright, enthusiastic and popular among fellow drivers and fans alike, the inspirational racer’s illness galvanized the V8 Supercar paddock last year as it rallied to support one of its truly good men.

The fact that rival teams, drivers and manufacturers came together to help him in whatever way possible showed exactly the sort of standing he was held in by the Australasian racing community.

A part of the V8 Supercars Championship for the last decade, Richards tackled his illness with the same vigour he had approached 131 event starts since 2000 in the toughest championship in this part of the world.

His ability to extract maximum speed over one flying lap made him a favourite to watch among his fellow drivers – many of whom had nicknamed him ‘Racin’ Jason’ - but it was his classy, courageous and often quite public battle with cancer that topped all of his achievements on track.

His passion for life, love of his young family, love of the sport he was so engrossed in and his positive attitude and determination in the face of adversity made – and still makes - him an inspiration to all.

Richards started 131 V8 Supercars Championship events and 284 individual races after making his debut with Team Kiwi Racing at Bathurst in 2000.

He drove for the ‘All-Black’ Team Kiwi squad for three years before joining the brand-new Team Dynamik in 2003 in Adelaide.

He moved to Sydney to drive for Tasman Motorsport in 2004 (moving to Melbourne along with the squad a year later) and spent five years with the team before finding a happy home with Albury-based Brad Jones Racing and Team BOC from 2009 onwards.

Despite not making a V8 Supercars Championship race start last year, Richards took part in a range of co-driver practice sessions earlier in the season and tested the #8 Team BOC Commodore in between treatments.

He won an emotional race in a one-off appearance in the Dunlop Series in Adelaide driving one of his old Tasman Commodores for Greg Murphy Racing and also drove a Ferrari in the Australian GT Championship on the same weekend.

A runner-up result on the Sunday morning before The Great Race to Glenn Seton was met with universal acclaim up and down pit lane.

Sadly, it would prove to be his final appearance behind the wheel.

His last race appearance in a V8 Supercar came at this year’s non-championship Albert Park 400, where a gutsy Richards qualified a brilliant fifth and claimed a brilliant second place in Race 2 after leading early.

It was simply a day that those present will never forget.

11/12/2012
Stay In The Know
Sign up to the Virgin Australia Supercars Championship Newsletter
We use cookies to ensure that we give you the best experience on our website. If you continue to use this site we will assume that you are happy with it.Ok