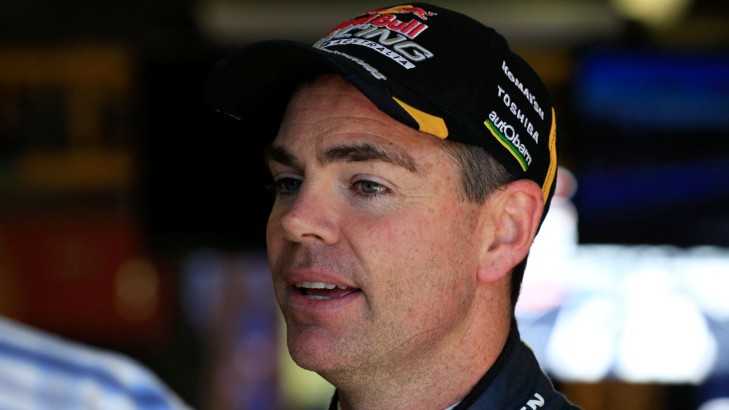 Craig Lowndes has played down the prospects of a another Red Bull domination at the SKYCITY Triple Crown Darwin 400 despite leading teammate Jamie Whincup in locking out the front row of the grid for this afternoon's Race 19 of the V8 Supercars Championship.

Instead Lowndes, who has narrowed 10th fastest qualifier Mark Winterbottom's Championship lead to just 65 points, says it will be "massively hard" to overcome the tyre management issue the 200km race poses and emerge with the win.

"There will be some great competition out there," he said. "Fabian Coulthard hung in there well yesterday and Shane van Gisbergen also had strong pace.

"I think a lot of guys will learn from yesterday."

Not that Lowndes was discounting the threat posed by five-time and defending V8 supercars Champion Whincup, who took both ARMOR ALL Pole Positions and won both 100km races yesterday, while he finished second.

"Although he didn't get pole, Jamie is still second on the grid and he is going to be hard to beat this afternoon, especially as he took two strong wins yesterday."

Each driver has two sets of soft Dunlop tyres to get through today's race, as well as the best of their left-over Dunlop hard tyres from Friday's practice and Saturday's qualifying and racing.

Six drivers, led in qualifying by Russell Ingall, have new hard tyres because they elected to sacrifice one of the 100km races yesterday or retired from a race and therefore have fresher rubber.

"It's a matter of who has saved the best tyres from yesterday," said Lowndes. "We know some drivers have saved a new set of tyres for this afternoon.

"One of the big things is starting from the front at least we can try and get our laps out of the way on the hard tyre as soon as we can and then get on to the soft tyre."

Lowndes has an advantage over Whincup because he needed only one set of tyres to set his 1min 08.750sec ARMOR ALL Pole Position time, meaning he has an untouched set for the race.

"That was our plan, we didn't know what lap time we would produce on the first run but we said if we record a high eight we would pull the pin. We got to an eight-seven so we knew we were in with a good shot for the front row.

"The benefit for us is we now have a brand new set of tyres for this afternoon and that's really what we aim for. You really need that best shot right at the end of the race this afternoon and even taking one lap - or three if you count the warm-up and cool down laps - is a lot.

"So for us it was the ultimate way of doing it. it puts us in with a good shot."

This is Lowndes' fourth pole position of 2014, one more than he managed throughout the entire 2013 Championship, reflecting his determination to improve his qualifying performance.

"We had to," he said. "If you look at all our Championship results in the last three or four years qualifying has let us down."