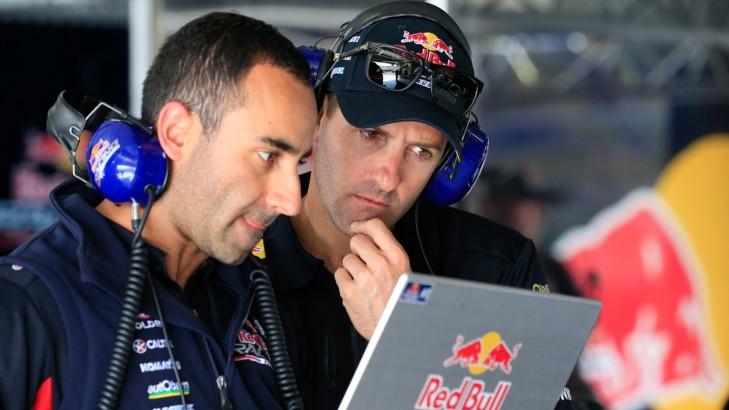 And if the relationship gels second time round, the duo will continue as a partnership into 2016.

The decision to bring Mark Dutton back as Whincup's engineer as he struggled for pace partway through the 2015 championship was one of the year's big stories.

But now that the co-driver Pirtek Enduro Cup is over, Dutton will resume his full-time duties as team manager, allowing team owner Roland Dane to step back from the 'prat perch'.

The reshuffle was confirmed to v8supercars.com.au by Dane on Sunday at the Castrol Gold Coast 600.

"The expectation - and it is 90 per cent at the moment - is that for the last three events of the year I want David to step back into the engineering role on car number one, allowing Dutto to step back to the front of the box as team manager where he should be and for me to stop doing a young man's job, which I don't think I am particularly good at any more," Dane said.

"I want to see that roll through and we will sort that out for sure next week."

Dutton engineered Whincup to five of his record six championships, while Cauchi took over in 2014 when Whincup staged an epic fightback in the second half of the season to win with a round spare.

But after a solid start to this season, Whincup struggled to unlock the 2015-spec Holden Commodore VF's speed and match the sheer pace of the Prodrive Racing Australia Ford Falcon FG Xs. Dutton took over as his engineer from the Castrol Edge Townsville 400, with Cauchi returning to his former role as data engineer.

Since then Whincup's pace has been stronger, although he and Paul Dumbrell have emerged from the Pirtek Enduro Cup without real success.

That leaves Whincup languishing in eighth place in the championship 807 points behind Pepsi Max's Mark Winterbottom with a maximum 900 championship points left to be won.

Looming behind Dane's second crack at linking Whincup and Cauchi is Shane van Gisbergen move to the Red Bull team in 2016 and Craig Lowndes relocating into a Caltex-backed entry. That means Triple Eight is an expanding organisation. The successful reunification of Whincup and Cauchi would make that proceed more smoothly.

"They can connect and do it no problem, they won a championship last year," Dane said. "Let's not lose sight of that.

"It is really re-establishing structure. We have the cars in a much better place technically. Dutto has been a big part of that, but so has Grant (McPherson - Lowndes' engineer) and Ludo (Lacroix - Triple Eight technical director) and the rest of the boys. They have really put their noses to the grindstone."

A potential issue in this change will be Whincup's attitude, as he was clear in his preference for Dutton earlier in the year. But Dane is adamant Dutton is more valuable to the organisation as team manager.

"Dutto will be in charge of the race team at an organisational level," he said. "Dutto has a well-proven engineering ability and he has the ability to do the management job better than I ever could.

"He is very well equipped to do that job. I always looked up to the combination of engineering skills and management skills that were demonstrated for many years by (Formula One team principal) Ross Brawn and Dutto is, in our world, capable of operating at that level in this category."

"He has been with us a long time, he is a great guy. We had to change in the middle of the year to try and get momentum back from a competition point of view in away which set us up well for winning Bathurst."

Triple Eight won Bathurst via Lowndes and co-driver Steven Richards. Lowndes' championship chances have also been boosted by Winterbottom's poor showing last weekend. Whincup, however, became embroiled in a team orders controversy for the second year in a row at Bathurst and finished 18th.

Meanwhile, Dane confirmed there had been discussions with Brad Jones racing engineer Phil Keen about joining the expanded T8 program in 2016 - reportedly to engineer van Gisbergen. Instead, Keed has elected to move to DJR Team Penske and continue his relationship with Fabian Coulthard.

"We would have been happy to have him, I like him, he is a good operator," said Dane. "But I very much respect the fact that he has gone to Penske. He is a very good guy and the sort of bloke that if he wanted to leave anywhere we'd always be keen to talk to him."