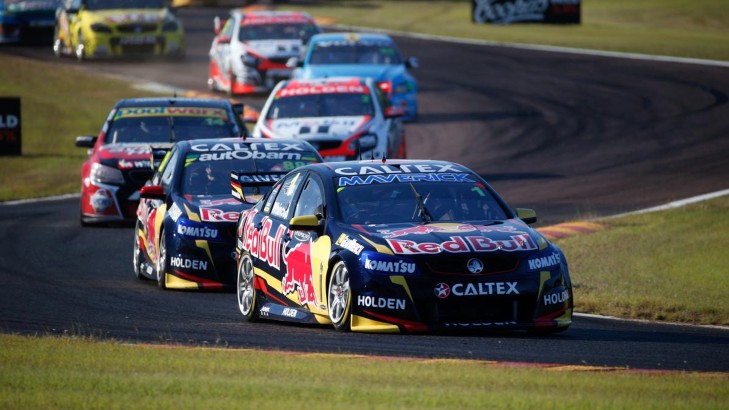 Red Bull Racing Australia has filled the podium for the second time today, as Jamie Whincup led home Craig Lowndes by 3.39 seconds in Race 18 at the SKYCITY Triple Crown.

While the defending V8 Supercars Champion has not had the success he would have liked so far this season, sitting fourth on the table, he has closed the gap to leader Mark Winterbottom to 165 points, while Lowndes is just 65 adrift after his two second places.

"You've got to have a quick car to move up in the Championship and we had that today - we came up with a perfect day two wins and two poles," Whincup said.

His eyes are fixed on the Triple Crown, which has never been won over the past 16 years of the event, where one driver sweeps all three races.

"We'll go out there tomorrow and do the best we can. It's a massive achievement - it's been going on for a decade and no one's won it. We'll give it a shot," Whincup said.

Lowndes admitted he was conserving his tyres in the second race, given a tight allocation this weekend.

"Jamie did a fantastic job and we're looking after tyres for tomorrow - unfortunately we have to rerun these tyres," the #888 driver said.

"I'm looking forward to tomorrow. I think the dual combination tyre is going to be exciting."

Garth Tander had a great jump from the start, catapulting up to third, while Winterbottom went back down the order. Fabian Coulthard passed the HRT Commodore for a podium finish, while he also sits third in the Championship.

The day ended early for James Moffat after a flat tyre caused damage to the left front of his Altima, and Lee Holdsworth with suspected power steering issues, similarly to his teammate in the earlier race.

Others to note include James Courtney in 11, who had to make up some ground after a brake lock-up, Jason Bright 12 - despite moving up one position in the points to ninth, and Will Davison 13th.

Stay tuned for tomorrow's qualifying session from Darwin at 12.40am local time, and the 200km race from 3.15pm.