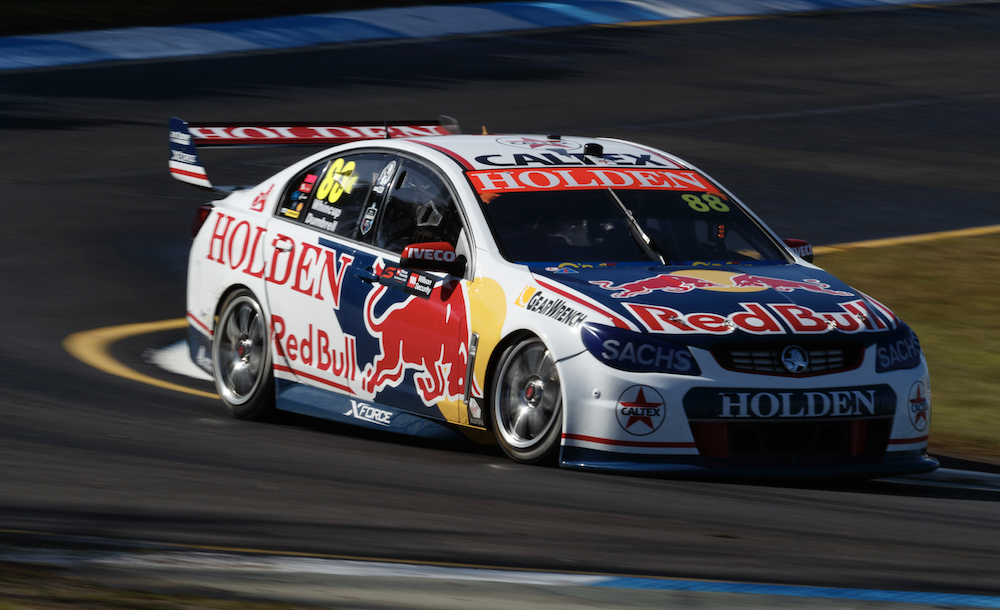 Red Bull Holden Racing Team manager Mark Dutton is refusing to blame the Sandown circuit for tyre failures that took its Commodores out of contention in today’s 500.

The Jamie Whincup/Paul Dumbrell entry was leading the race when it suffered a right-rear failure on lap 35, dropping the pair almost a minute from the lead.

Shane van Gisbergen, meanwhile, held third in the closing stages aboard the car he shared with Matt Campbell before a right-rear failure spat him into the Turn 1 gravel.

Whincup took the flag sixth and van Gisbergen 16th, dumping the Kiwi from fourth to fifth in the championship, now 420 points adrift of leader Scott McLaughlin.

Television coverage of the race focussed on a large divot that had developed at the end of the Turn 1 exit kerb, which some drivers had been running over.

Tyre failures have been a common thread during the 2017 season but weren’t expected to feature at Sandown due to the layout of the circuit.

While not ruling it out from contributing to his team’s issues, Dutton says there is more at play than the kerb.

“I hate blaming stuff like that, so I’m not going to,” Dutton told Supercars.com, stressing that few other cars had failures.

“At one point we thought it could be [the kerb], because only doing 15 laps [in Dumbrell’s second stint before his failure] was really odd.

“The track temperature was up a bit today but it wasn’t up silly amounts to a level you’d associate with an exponentially increased chance of that [a failure] happening.

“It can be that [the kerb], but it’s always combined with other things. If your cambers are marginal then a drop-off like that speeds up the process.

“Others appeared to be abusing their cars a lot more than us and not having problems. The circuit wasn’t the limiting factor. It was what we did internally.

“We didn’t feel we were excessive on camber either, but we need to look at the whole set-up of our car and tyres and how we use them.

“Obviously there were a few others that did it, so we weren’t solo, but still it’s not good enough on our behalf and it starts from me down.”

Whincup felt that the end of the Turn 1 kerb was the "most likely" cause of his car's tyre failure, but also stressed that the team needs to do a better job.

The six-time champion is now 84 behind McLaughlin in the title race and, while disappointed with the result, admits it could have been a lot worse.

“I don’t know what it is about these seasons of endurance, you’ve got to have a clean run and we did a shocking job last year, and we’re on track to do the same this year,” he said.

“We were genuinely 20th and 50 seconds off the lead [after the puncture] and there were no Safety Cars, we got no help at all.

“So we made our way back up through good pace. It could have been a lot worse. You certainly walk away going ‘lucky it was only 65 points or whatever it was.”

“We’ll put this weekend behind us and make sure we get better for Bathurst.”