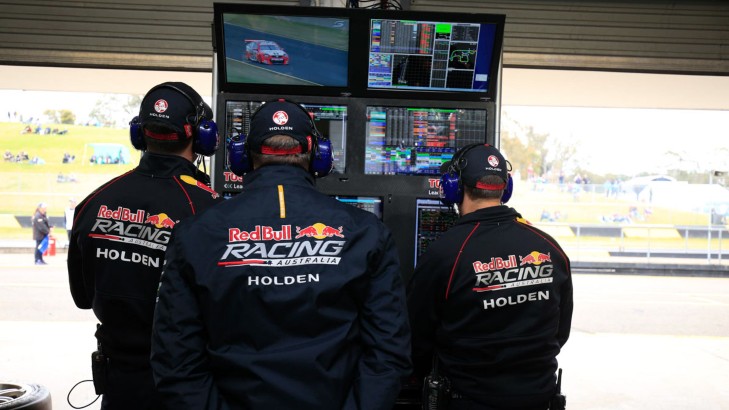 Roland Dane is hunting for team members with Triple Eight's expansion to three cars for 2016 underway.The team boss has revealed no current working groups are a certainty moving forward.

Now, he needs the personnel to run those cars at the front of the field and is open to possibilities for 2016, including mixing up crucial driver-engineer pairings.

"This is not restructure, this is running three cars - so as part of the setup to run three cars, we're taking on some more people to cover that," Dane told v8supercars.com.au.

"We've probably got another four positions to fill to take us to where we want to be.

"We are certainly still looking for an engineer and there's a couple of mechanic positions still open."

The curious part is Dane's suggestion that only one engineer is required when the crew on car #1 seems to be a temporary team.

In Townsville, Mark Dutton moved from his team manager role to engineer Whincup, who was in a form slump. Dutton is locked in to run the car for the remainder of the season, with David Cauchi as performance engineer.

Dutton is also juggling team manager duties at the workshop, while Dane performs the team principal role at the track.

"I haven't decided on any of them - who's going to do what will be a decision at the end of the year," was all Dane would say on the matter of car #1.

"I'm lazy - I'd prefer him [Dutton] running the team than me," he responded when asked whether Dutton would move back to team manager, rather than engineering in 2016.

Grant McPherson shifted from Ford Performance Racing at the end of last year to run Craig Lowndes, and while the pair has hit it off and garnered some good results this season, that combination is not a certainty either. Earlier this season Lowndes described McPherson's influence as giving him a "new lease on life".

"I have no idea at the moment," Dane said when asked whether the so far successful McPherson-Lowndes partnership would continue past this season.

"I've got all the options, it's like playing a big game of chess and I'm just not entirely sure at all where all the things end up," Dane said.

"So that has to play out, frankly when I see who's available to do what, where they'd like to be, and then we'll see."

Dane doesn't see van Gisbergen's current TEKNO engineer Geoff Slater as part of the plan, though there have been instances where an engineer will move with his driver.

"It happens sometimes but I'm not anticipating that to happen with Gizzy and we've still got to see who's going to be best for us at Triple Eight," he said.

The team yesterday announced Whincup would debut a new chassis for Sandown, which Dane hopes will help the Red Bull racer reinvigorate his 2015 title fight.