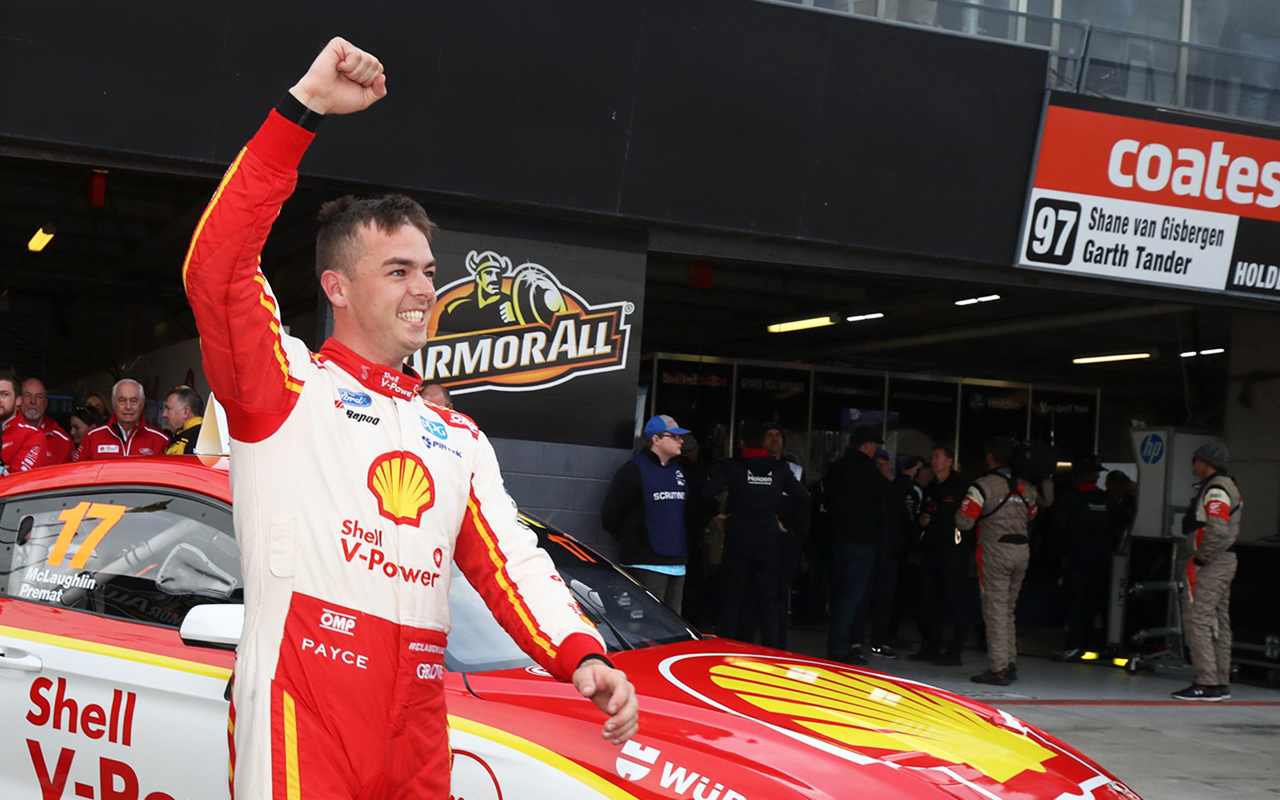 Scott McLaughlin has broken the Mount Panorama lap record for the third time in successive days to clinch ARMOR ALL Pole Position for the Supercheap Auto Bathurst 1000.

The Shell V-Power Racing star was the last man out in the Top 10 Shootout and it quickly became apparent that a special moment was on the cards.

McLaughlin went fastest in all three sectors to deliver a breathtaking 2:03.3783s to go more than a tenth faster than the benchmark he had set on Friday.

That followed him beating his own 2017 record on Thursday as the Kiwi continues his incredible weekend.

“Oh my god, bloody hell … I was hanging on for dear life there,” McLaughlin reacted.

“That in-lap was pretty impressive, I’ve never seen so many people cheering us on.

“I’m really proud of the team at Shell V-Power Racing, far out this car is a rocket ship and it just hooked up in those conditions. I’m just pumped.

“Coming down the hill, I was pretty fast and thought ‘jeez, I’ve just got to hold onto the thing’.

“Then just threw it into the Chase and the last corner and it held on, it stuck well.

“We’ve got one big one to get tomorrow, that’s what I’m focused on a lot more, but we’ve qualified now and we’re starting from the best possible position.”

His effort proved far too good for his rivals, toppling Chaz Mostert by 0.4114s.

Mostert did a stellar job himself as the penultimate runner in the session to earn a front-row berth for the 1000km classic.

“That was a lot of fun. It’s been a while since I’ve had that sort of confidence in a car in the Top 10 [Shootout],” he said.

“I did the best job I could, but we got smoked.”

Cameron Waters shot to the top of the timesheets early – and for a while looked like he might stay there – with an impressive 2:03.9178s effort pushing the limits.

“All over the top I was using the throttle to turn it and it actually helped me,” he said, having ended up third.

“Sometimes it’ll end up you’re in the fence and sometimes it actually helps you, and luckily it helped me.”

Jamie Whincup looked set to take provisional pole from Waters but had to settle for what would ultimately become fourth, three hundredths behind the Monster Energy Mustang.

“I had a slide onto Conrod Straight which cost me a little bit, but overall I’m very, very happy,” Whincup said.

Shane van Gisbergen and Will Davison weren’t quite able to dip into the 2:03 bracket and will line up on the third row of the grid.

“I drove it ok, but just missed a few spots and probably could have been a bit braver. But it’s all good, a straight car,” van Gisbergen said.

Anton De Pasquale delivered another quality Bathurst Top 10 Shootout lap, starting the show with a 2:04.3830s that would be good enough to hold him in seventh.

His effort was put into perspective with Mark Winterbottom next on track, the IRWIN Racing veteran putting in a scrappy 2:04.9800 to slide back to 10th overall.

“I kept pinching the front tyre,” said the 2013 Bathurst winner.

“We made a couple of changes, there was a better lap in it than that, but I can’t do a 3 so I’m just busting its backside to try and get it in there.”

Sandwiched between De Pasquale and Winterbottom in the final order were Brad Jones Racing teammates Nick Percat and Tim Slade, who lost ground compared to their fifth and sixth placings in Friday qualifying.

“We haven’t quite nailed the dry car this weekend yet, it’s pretty good in the wet, but we’ll keep chipping away,” Slade said.

Drivers and teams will get one more chance to prepare for the Great Race with a 20-minute warm-up from 8:20am.