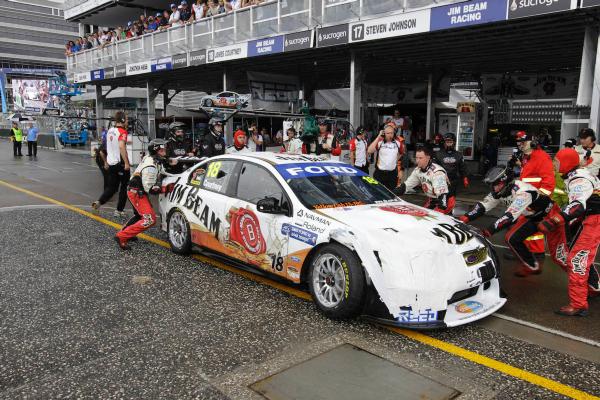 Real Insurance is offering fans the chance to win the ultimate Supercars experience each event, by selecting the standout racing moment in years gone by.

This week’s is the last Virgin Australia Supercars Championship event of the season, with the title set to be decided and hard-fought between the Red Bull teammates. Veteran Craig Lowndes will battle young gun Scott McLaughlin in the background for third, which could be an historic Triple Eight 1-2-3.

We’ve counted down our favourite moments over the last 10 days, and now it’s your turn to vote.

Here are some of the standouts from recent years – vote for your favourite below and stay tuned from Friday for all the news from the Coates Hire Sydney 500.

Loyal Ford racer Mark Winterbottom finally achieved Supercars’ ultimate prize, taking his maiden title last year. He earned a stunning pole position on Saturday while main competitor in the points Craig Lowndes had to start from dead last. Frosty came home with fifth, third and fourth over the weekend – more than enough to seal the deal. With his young family by his side, he also dedicated the victory to his late mum June, after growing up just down the road from Homebush.

All in the fence

One of those weekends that couldn’t be scripted. It was down to speed – but speed in the pit lane, rather than on the circuit, as crews raced to repair smashed cars after an afternoon downpour. James Courtney and Dick Johnson Racing came out on top of Jamie Whincup and Triple Eight on Saturday and Courtney was able to seal the deal and take his only Supercars crown to date on Sydney Sunday in 2010.

The rain took control in 2014, ending Saturday and Sunday prematurely with vicious storms. It was an all-out fight for the race win, because Jamie Whincup had already secured his record sixth title at the previous round – he was just waiting to hold up the cup. Loyal fans stayed in the stands for the year’s final laps in killer conditions.

The Holden Racing Team star was the first to tame the new circuit on the calendar back in 2009, as there were plenty errors in the field as drivers adapted to the physically demanding circuit. The victory over Mark Winterbottom and Jason Bright remains Tander’s only victory at the Sydney Olympic Park circuit, though he came tantalisingly close in ’14 before the storms hit and slid him off the track when in the lead.

Tickets are still available for this weekend’s final event at Sydney Olympic Park – click here for the details.