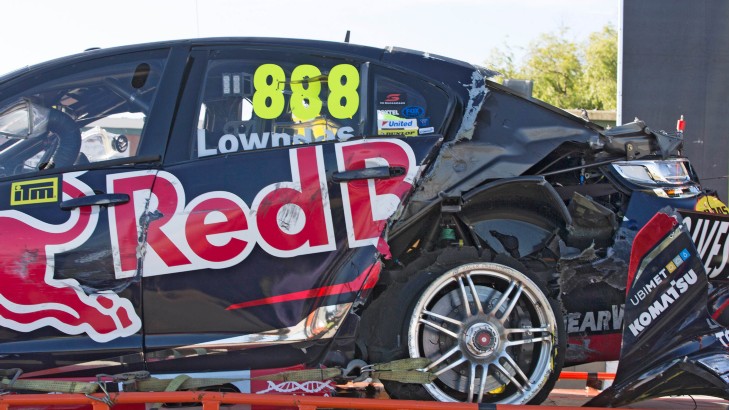 Red Bull Racing Australia will work as long as it takes to repair Craig Lowndes' Holden Commodore and have it on the grid for tomorrow's race.

While team principal Mark Dutton emphasised it would be a huge task to fix the damage, he was confident fans would see the #888 back on the grid and fighting for the Championship after Lowndes'tyre exploded and pitched him into the wall while leading today's second race.

"It's achievable - it'll just be time, if we can get it out in time," Dutton told v8supercars.com.au.

"We still have to do it right, we're not going to cut corners but we'll push on as hard as we can."

The team began assessing and working on the car immediately, and would need to take it off-site to fix it to its best ability.

"We've taken the engine out, as you can see, and stripped the front and rear of the car," Dutton said.

"It's a big task - it's huge - but the car has held together pretty well. Nothing safety-wise has broken or been bent or crushed. The internals of the car are spotless and that's the most important thing - that's when you start not being able to repair it.

"You damage the inside roll cage and things like that, they have to be a 100 per cent perfect fix. For some of the sheet metal and things like that outside ... you get it not as a perfect car off the jig but legal, race-able and safe in a sense that a wheel isn't about to fall off ... but it's not export quality that you'd usually do." 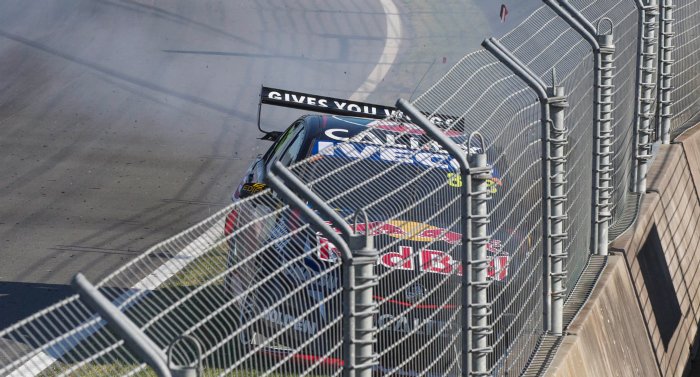 Despite being a flyaway round to New Zealand, Dutton was confident there were enough spare parts here to repair the car.

"Yes we do [have enough spares] - it's just going off-site to have better equipment and stuff like that. We have spares for lots of bits and pieces ... but that's why we bring out a few tonne in these containers."

The team does not know what caused the tyre to explode; Dutton did not want to speculate on whether running the soft Dunlop tyre for the first time made a difference.

"You can see the pressure quickly go down - too quickly to react and say back off.

"We'll double check all our safety systems, alerts and stuff like that and see if we can learn from it, but initial looks at the speed ... it's gone down and the second later it exploded."

Lowndes is fine after the accident and was heard apologising to engineer Grant McPherson on the radio after hitting the wall.

Leading the race with Championship rival Mark Winterbottom back in fifth, Lowndes' title bid has taken a big blow.

The win would have meant earning 75 points - instead he's been overtaken for second by David Reynolds and trails Winterbottom by 306.

"The one good thing is it was in one of the races that wasn't worth as much points [as Sunday] - we're not dropping 150," Dutton said.

"I imagine it would be a massive sigh of relief for Winterbottom. For Lowndesy to win that race ... it was really applying the pressure."