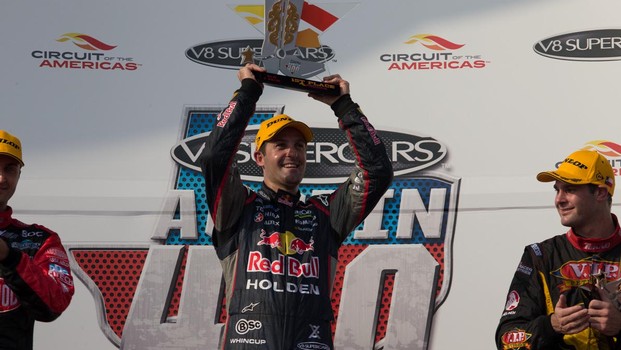 Red Bull Racing Australia driver andcurrent Champion Jamie Whincup has an impressive record at international races,having won at four of the five venues he has raced in offshore in a V8Supercar.

The one he did not win though, wasShanghai in 2005 when Whincup was a young driver in a Tasman Motorsport HoldenCommodore.

However, Whincup agrees his strong showingin China that year was when he started to get noticed, with two top 10 finishesand fourth in the final race, following home Todd Kelly, Steven Richards andPaul Radisich.

“I had a few little things – a top 10 withGRM and what not (before that) – but fourth at China on a new circuit was ahuge result for me,” Whincup said.

“It was massive at the time and I thinkthat was the start of it. And then you start getting a bit of respect out thereand things start to change, which makes progression easier.”

Without being asked, Whincup immediatelyrelated his experience as a young driver to Fujitsu Racing GRM’s ScottMcLaughlin.

“It’s always good to come to a new circuit– like I did in China – and no one else knows the track and you justdo a good solid job and you get noticed.

“I went well on a new track no one knew,just doing my thing. Obviously the car has to be good too which in his (McLaughlin's) case itis also – it doesn’t matter how good you are, there’s plenty of young guys outthere with terrible cars and no opportunity to go well.

“China was good. Fourth – I almost had alunge on Radisich at the hairpin on the last lap for third, to get on thepodium, but fourth was massive.

“I was a bit timid – fourth was going to bea huge result and I didn’t want to throw it all away, so I had more to losethan I had to gain.

“I was just doing my thing. Your skilllevel as a driver doesn’t really step up much in your later years, you learnall your skill in go karting and Formula Ford, that’s where all your actualracecraft comes from. Later you don’t really seem to drive any better, youjust get more experience on how to make the car go faster.

“The car was good on that weekend. Whetherwe fluked it or not was another thing – I won’t disrespect my engineer atthe time or anything – but we rolled the car out and it was fast and wedidn’t want to change it because we knew we would’ve gone backwards.

“So we had a good car and I was just doingmy thing which I’d normally do today.

“So that was what it was like back then– I’m sure it’s similar for Scotty – when the car’s good you drivewell … over the years you learn how to get the most out of the car and youlearn to work with your engineer and your mechanics and really maximise.”

While Whincup didn’t publicly discuss it atthe ITM 400 Auckland in New Zealand when the Jason Richards Memorial Trophy wasawarded, his time in the Tasman team meant he and Richards were close. He looksback on those early days in his career fondly.

“I keep all of that pretty low key, but wewere obviously very good mates,” he said.

“There’s a big story with JR at Tasman Motorsport, which was a pretty cool environment with Kevin Murphy – Greg’sfather – and Ron Harrop and all that.

“It’s one of those things where it’s hardwork at the time, but you look back on it and it was good times and a goodlaugh.

“As stupid as it sounds, JR and I used tobattle with each other – because we were running mid-pack, we were justbattling who could brake the latest at the end of the straight. So that’s allwe were worried about all weekend, who could brake the latest – he ended up inthe gravel three times, I ended up in the gravel four times, but we won a goodbattle.

“It was pretty stupid at the time but it’spretty funny to look back on it.”

Is Aus' Most Eligible Bachelor at FPR?