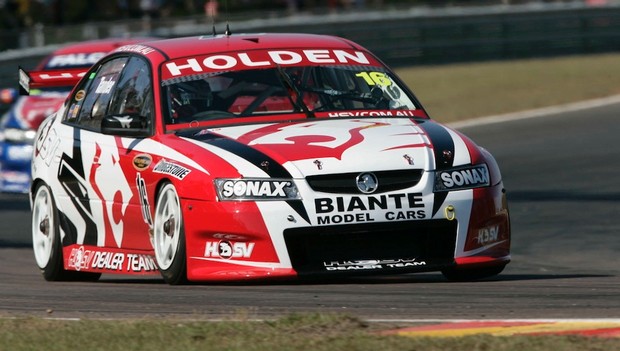 Garth Tander heads to this weekend’s SKYCITY Darwin TripleCrown looking to break a winless streak that extends back 20 months for him andthe Holden Racing Team.

Wind back to 2005 and he approached Hidden Valley personallywinless for five years and looking to make the break through for not onlyhimself but the newly-established HSV Dealer Team.

He succeeded in that ambition, passing Todd Kelly in thesister Holden Racing Team Holden Commodore after the pit stops in the third andfinal race of the weekend to nail the win and stand second on the podium forthe event.

Todd claimed the overall round having won the first tworaces, while his brother and Garth’s teammate Rick Kelly was third overall.Just to make Tander feel totally out-numbered in this family affair, the HSVDealer Team (which grew out of K-Mart Racing) was owned by Todd and Rick'sparents, John and Margaret Kelly!

It was the start of an amazingly successful era for the team,which garnered the driver’s Championship for Rick in 2006 and Tander in 2007and the teams’ Championship both years.

In 2008, Tander and key team personnel including teammanager Rob Crawford and engineer Matt ‘Techo’ Nilsson were shifted to HRT.

Much water has flowed under the bridge since then; theKellys own their own shop and run Nissan Motorsport, Crawford works for themand Techo is now at FPR. Only Tander remains at HRT and Walkinshaw Racing fromthat potent lineup.

And again, he is waiting for a win, which this time willsnap the longest losing sequence in the factory team’s history. Will it happenin Darwin? He won’t hazard a guess.

“We will win races during the year but when that happens Ican’t give you a timeline,” Tander shrugged.

There are some intriguing similarities between 2005 and2013. Like then, Tander has this year been sneaking up on the front-runners,showing top 10 pace more often than not (click here to see his season progress). Right now he sits seventh in the Championship, 329 points off Jamie Whincup’s pace.

Back then, he’d managed to get into the Top 10 Shootouton all but two occasions (top 10 shootouts were conducted at every round inthose days) but had got himself mixed up in some race argy-bargy. Simon Willsgot him once, Max Wilson another. A concertina at the Shanghai hairpin hadaccounted for him on yet another occasion.

Wills? Wilson? Shanghai? Man, this is a flashback!

When the Darwin win finally came (after fifth and thirdplaces) he’d greeted it almost circumspectly.

“I was pretty happy to have won a race because it had been along time, but at the end of the day it was one race,” he said in an interviewat the time.

Nowadays he looks at that win, the Hidden Valley track andthe Top End race weekend with only a little more emotion.

“I have had some race wins up there, I haven’t had a hugeamount but it’s an enjoyable weekend. I wouldn’t say it is a firm favourite butit is certainly a weekend I look forward to every year.

“I enjoy the weekend, I enjoy the race, given we arecurrently standing in Melbourne and it’s 10 degrees. The fact you fly to Darwinand it’s 30 degrees and the sun is out and you can wear shorts is good.”

But that heat, which is so enjoyable out of the car, alignswith a low-grip surface to make set-up a challenge. Everyone will run on hardtyres for Saturday’s qualifying and 60/60 and then have two sets of softsavailable for Sunday’s two qualifying sessions and 100km races.

“It is such a low grip surface given the harshness of theweather conditions they have there year on year,” said Tander. “Every time wego back there it (the surface) gets worse.

“Understanding the surface is the big thing. There areprobably three different surfaces so getting the car to grip up well on themajority of the circuit is hard.”

Tander’s confidence was not high for Darwin because hestruggled to find a decent set-up in the Chill Perth 360 at Barbagallo Racewayin May, the last event conducted at a low-grip circuit.

However, on the flipside, James Courtney had a good run thatweekend.

“We have a very small operating window with the car and thatmakes it difficult,” Tander explained. “We either get it closer or not and itis very hard to get the car back in the window. Sometimes I have had it andsome weekends James has had it.”

Tander said even the advantages of extra horsepower for the1.1km straight would quickly be negated by the search for grip: “That probablymakes a difference in qualifying, but once you do two or three laps it becomesall about the tyre, making the tyre live given the sun, the track temperatureand the UV and the track being such low grip.”

The disparity in temperatures also meant that expecting lastweek’s Winton test to deliver big gains for HRT was unrealistic.

“You can’t go to Darwin on the back of a test at Winton whenthe track temp was 18 degrees and the ambient was 12 and in Darwin the tracktemp will be 50 and the ambient 33,” Tander said.

“What we did was validate a lot of the stuff we had put onthe car in the last couple of races. We validated some theories we have withthe car, we ran an engine upgrade package with the car. It’s not a big thing,but it seemed to make a difference.”

Tander joined with several other drivers inexpressing concern about the 60/60 nose-to-tail restart on the long HiddenValley straight.

“There will be some drama at turn one. It’s as simple asthat. The best way to avoid that will be to be in the first couple of rows buteven then you might not have a choice to be involved anyway.”

Garth Tander  ›
15' Holden Racing Team ›
2013 SKYCITY Triple Crown  ›
Stay In The Know
Sign up to the Virgin Australia Supercars Championship Newsletter
We use cookies to ensure that we give you the best experience on our website. If you continue to use this site we will assume that you are happy with it.Ok