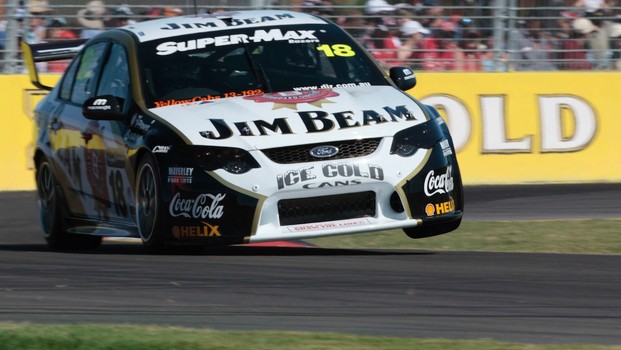 This time next week crews will be settingup at the Sucrogen Townsville 400 – but let’s cast our minds back to 2009,the first time the event was staged on the streets of Northern Queensland.

The 2.86 kilometre circuit – a hybridof permanent circuit and challenging street track – is a winner withdrivers.

But only three in the field have managed towrangle the top spot from Jamie Whincup, who has won a race there every yearsince it’s induction into the Championship.

Mark Winterbottom did it in 2010, GarthTander in 2011 – and in the first year of the event it was James Courtney in aDick Johnson Racing Ford Falcon who tamed the Townsville streets on Sundayafter a great dice with Whincup.

Looking back on the weekend, Courtneylaughed – it was a long time ago. But the first thing he remembered was how quickthe car was, straight out of the truck.

“It was the first time we went toTownsville and it was great,” Courtney said of the weekend.

“As soon as we rolled it out we had reallygood car speed. And to have that speed with no prior knowledge of the circuitshows what a good job everyone was doing in the team.

“We rolled it out, were quickest and I hada really good feeling about the car.

“To go on and win that first time in Townsville was fantastic – it’s definitely one I’ll remember.”

Courtney set two lap records in the firsttwo practice sessions, but Will Davison topped the final session on the Friday.

“We should’ve really won both races,”Courtney said. “And I suppose everyone says that, but the engine drama took usout and that was disappointing.

“But as a team, to come back on Sunday anddominate and win like we did was great.”

Interestingly, it was two Holden RacingTeam Commodores on the front row (Tander and Davison). WhileTander got a great start, it only took Courtney three laps to round up Davison. And then on lap nine he passed the #2 Commodore for the lead.

It was a race won in the pits. That waswhere Whincup passed Courtney early – but the DJR crew was quicker during the second time stop and released Courtney just in time, making Whincup wait and file out behind.

While Whincup battled hard and boldly triedto pass Courtney for the lead in the later stages of the race, he just couldn’tget around.

“It was a good clean fight,” Courtneyremembered. “I’ve never really had a drama racing hard with him.”

Tander was third that day and Davisonfourth, ahead of Courtney’s teammate Steven Johnson.

While Johnson held fifth position in theChampionship after that race, Courtney was down in 17th. The results improvedthough and he finished in seventh at the end of 2009, one spot behind Johnson. It was thefollowing year Courtney took the Championship from Whincup, who waslooking for a hat trick.

Only the two have won the Championship inthe last five years.

Heading into the Sucrogen Townsville 400 next weekend, it’sa timely return to form for Courtney in 2013, who snagged ARMOR ALL PolePosition at the last event and seemed much more comfortable in his Holden RacingTeam Commodore.

“Townsville has been really good to me inthe past and definitely with the car speed on board at the moment, it will be agreat place to drive. The town is always right behind the event.

“The best part about Townsville is it is ahybrid street circuit and road course – in than it’s a normal circuit, some ofit is parklands and it’s a street circuit as a majority.

“The one drama we have with street circuitsis visibility – but here that’s not an issue.”

Courtney said prior to Darwin he wouldn’thave been looking forward to the Sucrogen Townsville 400. But after a positive showing at the last event – at Hidden Valley Raceway, which he described as "typically horrendous" – the #22 driver has some confidence.

“We’ve cleaned up our tyre degradationissues and had tyre life in Darwin,” he said.

“It’s a bit of encouragement going in. Withthe two 200km races, fitness, strategy and fuel conservation will play parts,so it’s going to be more of a race for the team to be involved in as well.”

The Sucrogen Townsville 400 runs nextweekend, from July 5-7. There’s plenty to see and do at the circuit– tickets are on sale through Ticketek.

For those unable to attend, purchase V8SuperView as the ultimate race companion – the live, uninterruptedstreaming can be played on your computer or mobile device and will be exclusivelyshowing Practice Three on Friday and Four on Saturday.

James Courtney  ›
15' Holden Racing Team ›
2013 Sucrogen Townsville 400  ›
Stay In The Know
Sign up to the Virgin Australia Supercars Championship Newsletter
This website uses cookies to improve your user experience. By continuing, you will be providing your consent to our use of cookies.Ok