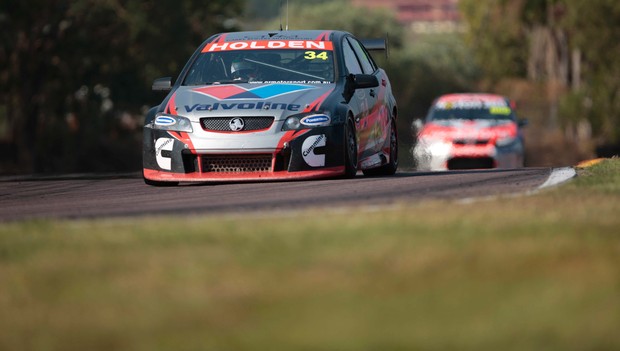 Michael Caruso has had one win in a V8Supercar – and he is heading back to the circuit where he was victorious for the next event. Hidden Valley Raceway inthe Northern Territory marks the now-Nissan driver’s career highlight back in2009 when he won the year’s 10th race in a Garry Rogers Motorsport HoldenCommodore VE.

Caruso puts the win up there with his thirdplacing at Bathurst, which was later that year, and says he can’t help butthink back on his win when he sees Hidden Valley on the calendar.

“I can’t not think about it (the win) given we gothere every year, and I tend to go quite well there,” Caruso said of thecircuit.

“It’s always going to be one of thosemoments – professionally and outside of that – I will never forget.”

The result was a career best for secondplaced Alex Davison as well – in a Stone Brothers Racing Ford Falcon at the time –who was followed home in third by Craig Lowndes, also in a Falcon.

“Looking back – we never went into theround thinking we had a shot of winning.

“It was my second year in the category andTriple Eight had been dominating, their domination streak was that stage.

“We qualified sixth – which we werereally stoked with – and we knew we had a lot of pace on hard tyres. Forthat particular event we had to run both hard and soft tyres through the weekend.

“We knew that we were confident with hardtyre pace in that race and weren’t sure where that would put us, but ultimatelythat won me the race.

“One of the biggest challenges was with10laps to go the Safety Car came out as someone was stopped on the track.

“I had this 6.5 second gap on the wholefield and that turned into nothing. That was frustrating after working all racewith a few laps to go.

“Craig Lowndes was on my bumper bar, so Ihad to hold him off and then there was Alex Davison coming through as well.

“It was an extremely satisfying feeling torace wheel to wheel and beat someone like Craig – that is something I won’tforget. I have a lot of respect for him and what he has achieved, so thefeeling to win a race in that circumstance was really cool.”

While it was significant to tally up a win,Caruso felt the achievement meant he was perceived differently by others in pitlane.

“It’s always special and important toremember these moments and why you go racing,” he said.

“Obviously at heart everyone wants to win,so it’s good when things aren’t going so well (to have) things that motivateyou to go better – I use that moment and others that have been really importantand motivating to go forward.

“And in other ways it’s good – everyonestarted to take me a bit more seriously on and off the track, which was greatas well, I earned a bit of respect from my peers.”

The year was a breakthrough one for Carusowho stood on the podium at Bathurst with then-teammate Lee Holdsworth that October.

“Finishing on the podium at Bathurst that same yearwas a huge achievement,” Caruso said when asked about his other motivatingmoments.

“Myself and Lee, we had a good combinationtogether and worked really well – we liked the car with the same setup; and sitin the same seating position, which makes easier; and we get along quite well.

“So I think third that year, when we put inperspective what we were up against, was really cool as well.

“Standing on the podium at Bathurst issomething that can’t not be taken seriously.”

This year, Caruso and his Norton 360 Racing team aren’t taking the challenge of the SKYCITY Triple Crown event at HiddenValley lightly.

“There’s no doubt the straight is going tohurt us,” Caruso said. “We know it will be a problem.

“A good opportunity is at that track tyredegredation is somewhat similar to Barbagallo... We were strong at Barbagallo in terms ofrace pace and that will be one of the keys to the weekend, especially Sundaywith the 200km races.

“The 60/60 races, it will be interesting tosee what approach everybody takes. Even for 60km around there, you can go toohard too early and fall back in the others’ hands.

“It’s one of those tracks that is good forracing, everyone sees virtually whole track no matter where sitting so it’s anenjoyable circuit. Everybody loves going up there, there’s good atmosphere andthe town gets behind it. The weather’s always really good as well – itwill be hot, similar to Texas probably – and the cool suits will be working onoverload.”

Caruso said he enjoyed the 60/60 format,which reminding him of racing karts.“You had heats and each heat was a bit like a smaller race, then the the final.It feels like that, a couple of heats then the races on Sunday.”

However, despite the mixed up formats, the#36 driver felt the level of racing was down to the circuit. “Every track,whether we have a certain format or not, is going to produce a certain amountof racing. That’s more track dependent than format dependent.”

For more information on the SKYCITY Triple Crown see the event page, or Ticketek for tickets to the event.

Michael Caruso  ›
15' Nissan Motorsport ›
2013 SKYCITY Triple Crown  ›
Stay In The Know
Sign up to the Virgin Australia Supercars Championship Newsletter
We use cookies to ensure that we give you the best experience on our website. If you continue to use this site we will assume that you are happy with it.Ok