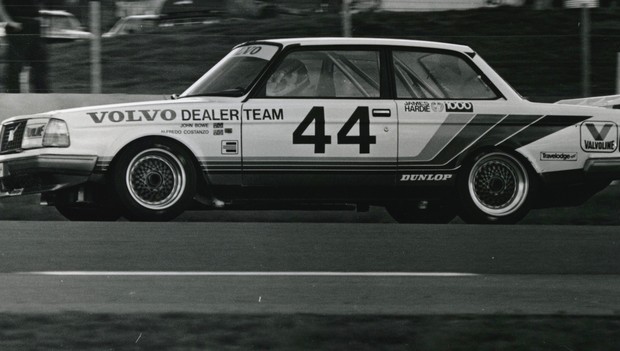 This weekit was announced Volvo would be on the V8 Supercars grid from 2014 – butthis won’t be the first time the Swedish manufacturer will feature inAustralian motorsport.

While JohnBowe may have achieved his legend status steering a Ford, the multipleAustralian Champion – who now contests the Touring Car Masters series– began his career in a Volvo, back in the 1980s.

In fact, hisfirst attempt at the Bathurst 1000 was behind the wheel of a Volvo 240 Turbo as teammate to Robbie Francevic.The race weekend was just the second time Bowe had driven the Volvo.

The pair drove at the 500 at Sandown, as well as the 1000 – and whileboth resulted in DNFs, at Mount Panorama the pair qualified fifth and ran inthe top two before running out of fuel on lap 122 of the Great Race.

Bowe remembers the time fondly and credits his career to that opportunity to contest the 1985 Australian Endurance Championship with the Mark Petch backed Volvo 240 Turbo team.

“That wasmy first visit to Bathurst, and then the following year in 1986 I joined theseries from the fourth round as a full-time driver,” Bowe said.

“So it wasmy first opportunity to become a touring car driver – with Volvo.

“It’s quitefunny because most people associate me with Dick Johnson and a Ford – which I’mstill actively racing – but with the prominence of Volvo after this new entrywith V8 Supercars, I’ve had dozens of people ring me up. And it was 30 yearsago!”

Hedescribed the weekend in ’85 as a big learning experience.

“I was veryunfamiliar with touring cars and their mass– the weight, the centre of gravity – I’d driven single seater race cars since Iwas a kid.

“Also I’d never been to Bathurst before in my life. Like everyone else, I’dwatched it on television. But I was unprepared of the realities of what a verychallenging track it was then, and still is.

“That first day I was driving with an established guy called RobbieFrancevic, a Kiwi. He asked me to drive with him. Only because he couldn’t getanyone else – especially for the money, which was none!

“That night I asked Allan Grice, who I knew – not well, but I knew – whowas a very established, top-line driver at the time. And he gave me advice.

“He drove me around the circuit in a road car and gave me all the tips arookie would need. And the next day, it all flicked into place and I was faster thanRobbie! He made it a much simpler thing, and I’ve always been grateful to AllanGrice for that.”

That year, Tom Walkinshaw’s V12 Jaguar XJSs were on the grid – Bowedescribed the situation like an army (the Jags) against a bunch of spearthrowers. John Goss and German driver Armin Hahne – in one of the Jaguars –won the race, with Walkinshaw and co-driver Win Percy finishing three lapsdown, but clinching third.

“That opportunity to drive created my touring car career, which wenton from that year to the end of 2007, when I retired from V8 Supercar racing.So it was one of those life-changing things – and it was in a Volvo.”

The following year, the team became fully factory-backed Volvo DealerRacing, with Francevic and Bowe – from round four – the official ATCCVolvo drivers. Francevic became the only ATCC driver to win a Championship in aVolvo, in 1986 in a Volvo 240T.

Bowe credits his drive in the Volvo team as having put him on the map.

“It created other opportunities – that year in ’86 I had a reallygood battle with Dick Johnson at Bathurst. He was in a green Mustang.

“So (Volvo) has a link in my very long career.”

“I’mdelighted they are back into it – it’s terrific. And it shows how committedthey are to further the image and brand of Volvo.

“Too manyother manufacturers sit on their hands and wait but this is very proactive … thebest news the series has had for years.”

While many people have tried to find his old Volvo, Bowe is unsure if itis still around. The team was shut down at the end of ’86 and he believes itsat in the garage for most of ’87.

“Several people tried to drive it and get deals, but it didn’t happen. Ithen drove for Nissan and then the cars went back to Europe. It may still existin Europe. It’s a shame really, but by ’88 it wouldn’t have been competitive.”

Bowe willbe back behind the wheel of his Mustang at the Coates Hire Ipswich 360 for theTouring Car Masters series.

Coming offthe last round at Darwin, Bowe swept Hidden Valley Raceway in his 1969 Ford Mustang TransAm taking the round win and leading his class outright from Jim Richards –the other outstanding driver to have competed at Bathurst in a Volvo.

“I love racing. I’ve said this to many people – I’ll race until Ican no longer race,” Bowe said.

What he loves about the Touring Car Masters is that it runs the carshe grew up lusting after.

“It’s like living a boy’s dream. When I was a young kid, if I had aMustang I would have been the King of Tasmania!

“It’s fun, challenging and most of the guys are genuinely good blokes … It’sa good fit as a support category to V8 Supercars.”

18/06/2013
Related Content
Volvo Prepares for Highs and Lows  ›
19/06/2013
Volvo Won My Team Over: Rogers  ›
18/06/2013
V8 Involvement to Showcase S60 in Aus  ›
17/06/2013
Stay In The Know
Sign up to the Virgin Australia Supercars Championship Newsletter
This website uses cookies to improve your user experience. By continuing, you will be providing your consent to our use of cookies.Ok