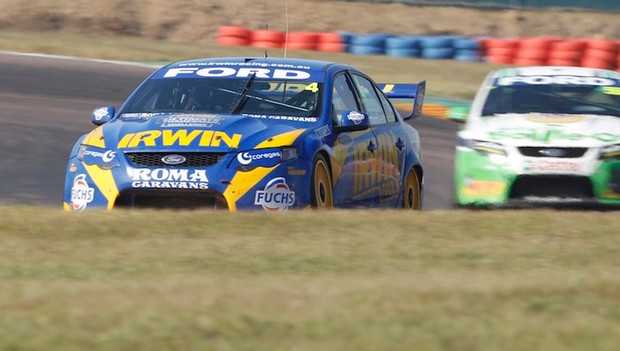 After a second place at Hidden ValleyRaceway in Darwin in 2009, on return in 2010 Alex Davison bagged ARMOR ALL Pole Positionat the Northern Territory track – his first ever in V8 Supercars.

While the two results at the circuit– the next stop on the 2013 Championship calendar – are two of hisbest in the series, Davison said he is hoping more career highlights are tocome.

“For sure I haven’t had the consistentsuccess I would like but there have been days we have been running well,” hesaid.

“Some of my best races I’ve been runningreally strongly and had a pit stop drama or mechanical drama that’s put me outof contention. Those performances or races no one else would notice, because wedidn’t end up getting a result, but they were enjoyable from the driver’s seat.

Unfortunately for Davison, 2010 at HiddenValley was one of those performances. While he managed to hold his ground atthe front of the field in his Stone Brothers Racing IRWIN Tools Ford Falcon, heeventually had to retire with an electrical problem.

“We were going into that weekend with someconfidence because we were competitive there (Darwin) in 2009 and had a good result,and we were hoping to do well.

Davison managed to qualify just 25th in the race on Saturday – Race 13 of the Championship – but pressedon to finish 15th.

“We started turning things around in the raceon Saturday and moved through the field a bit.

“We were moving in the right direction andexpecting a better day Sunday – but not expecting go out on pole! I was surprisedas anyone else at the end of the session. The car felt better but it was notunbelievable by any means, not for a car on Pole Position. But it could’ve beenone of those sessions, maybe no one was happy with their car and outs was thepick of the bunch.

“It was surprising, gratifying – such asurprise that I was apprehensive about the race. I wasn’t sure, I wasworried it might have been a fluke!

“We were really competitive in the race andled for the majority battling with Jamie (Whincup, who ended up winning therace). He got in front with a slightly different tyre strategy – he tooktwo and we took four in the stop – so he got in front, but we were still in thehunt, until the electrical problem.”

Davison recorded a devastating DNF (did notfinish) for that last race in Darwin that year. Whincup, MarkWinterbottom (FPR) and Shane van Gisbergen (SBR) rounded out the top three.

“It was a great weekend, we weren’t aconsistent front-runner at that point, so it was satisfying for me.

“We’d been running at the back of the top10 and in the mid-field all year – and when I did find myself on the frontrow, I had no problem running at the front with those guys, I wasn’t out ofplace.

“I led the race comfortably for a lot oflaps and was right in the hunt, did everything I needed to do. It wasdisappointing – I had the most reliable car in fifth or 10th, butwhen I was in the lead the car breaks down, you’d never read of it, but it’sone of those things and one of the reasons motorsport can be so cruelsometimes.

“It’s another one of the would’ve been andcould’ve been, if things turned out a bit different… I watched the end of therace from pit lane.”

Davison enjoys racing at Darwin and whilehe said every track was unique, he doesn’t treat the races any different.

“It’s always good going back to a track youknow well and drive well on. Every race we go to I’m hoping and aiming to dowell… we’re getting more competitive every outing and are not far off.

“I’m confident Darwin will be a track thatsuits us well... There are things about every track you go to, technical thingsto adapt for, but at the end of the day it’s another bit of tarmac.”

The SKYCITY Triple Crown will run at HiddenValley Raceway from June 14-16, tickets through Ticketek.

Alex Davison  ›
Stay In The Know
Sign up to the Virgin Australia Supercars Championship Newsletter
We use cookies to ensure that we give you the best experience on our website. If you continue to use this site we will assume that you are happy with it.Ok