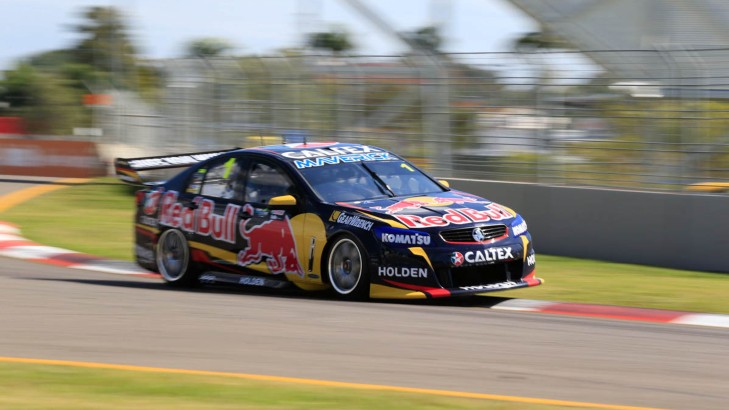 Amidst a four-week break in the V8 Supercars season, teams are taking the opportunity to test.

Eight new gen V8 Supercars hit the track in Winton, Victoria, as well as three at the home of the next Championship event, Queensland Raceway, today in fine conditions.

Co-drivers were present in most cases, the exception at Triple Eight - with Craig Lowndes overseas and Paul Dumbrell unavailable.

With an all Dunlop soft tyre round ahead, the Coates Hire Ipswich 400 beginning August 1, both teams at Queensland Raceway focused on improving tyre life.

All the teams that tested today have just one allocated test day left for 2014, which they plan to use prior to the Pirtek Enduro Cup, to ensure everyone is prepared as best as possible for the ever-important long-distance races.

The VIP Petfoods Holden Commodore VF ran approximately 130 laps around 3.12km Queensland Raceway, with Shane van Gisbergen behind the wheel for the majority of the day and team boss and Pirtek Enduro Cup co-driver Jonathon Webb cutting around 30 laps.

The morning went smoothly for the team, as engineer Dr Geoff Slater worked with van Gisbergen to improve the general performance of the car and soft tyre life, with the compound to be used exclusively at the next event.

"The soft tyre is pretty good for us, I always like it, so hopefully it lasts for us. It's the tyre life that's the big thing on that compound, and I think we made some gains today," van Gisbergen told v8supercars.com.au.

What the team thought was a gearbox glitch was dealt with quickly, and while rain threatened it never came, giving the team plenty of clear running.

TEKNO through some changes too time consuming to try at a race weekend, that confirmed they were headed in the right direction.

As reported earlier, the team will test again before the Pirtek Enduro Cup to give Webb an extended run in the VIP Commodore.

Both Red Bull Commodores ran today at Queensland Raceway, but unlike most other teams testing, just two drivers gotbehind the wheel.

Race engineer for car 888 Jeromy Moore believed the team had made progress, with a faultless day of running that saw neither driver drop a wheel in the dirt.

"I think there's still a tiny bit we need to improve going into Willowbank in a week and a half, but I think we've made some good gains, getting some good tyre life," Moore told v8supercars.com.au.

"During Richo's runs and Jamie's runs today we had very little tyre drop off, the balance of the car was good, so I think we're looking in good shape for the races.

"The cars ran faultlessly all day. We didn't have huge changes -we knew we didn't need wholesale changes to the car - it was all about refining what we had and just testing things we thought.

"We haven't had a lot of test days on the softs because last time we focused on the hard, so we had a few little question marks on a few different setup things we wanted to retest and they confirmed what we thought, and also showed us a couple of different ideas we didn't try before, so we're pretty happy with the day."

Triple Eight plans to test again in September, with all four drivers present.