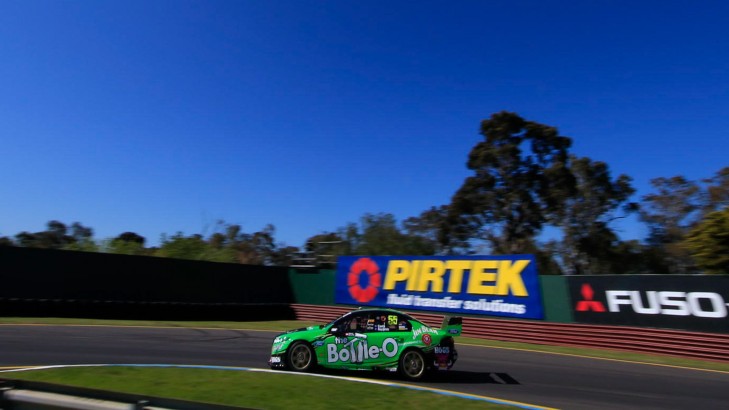 While it's all about qualifying today at the Wilson Security Sandown 500, today's unique format is sure to incite some action as the drivers put it all on the line to secure AMOR ALL Pole Position for tomorrow's endurance classic.

The traditional Saturday format has been given a shake-up, with a 40-minute practice session at 10.20am kicking things off.

Then, a standard qualifying session will be held at 12.20am. This 20-minute hit out is open to both the primary driver and co-driver, and will determine the grid for qualifying race one at 2.00pm.

The first qualifying race will see the co-drivers pitted against each other in an adrenalin-charged 20-lapper. Where they finish will be where the primary drivers start in the second qualifying race of the day at 4.10pm, which will set the grid for tomorrow's 500 kilometre haul.

But before the drivers battle it out to earn a spot on Sunday's grid, come along to the V8 Supercars paddock to meet the drivers during the official V8 Supercars Autograph Session. From 8.50am, each driver will appear at the back of their team transporter for half an hour, signing posters and taking photos with fans.

Between the races, keep your adrenalin pumping when the Porsche Carrera Cup, Australian GT, V8 Utes and the Australian Formula 4 Championship take to the track. The Hot Wheels Stunt Team, Showtime FMX and the Aussie Bandit Ute will also be on hand to continue the high-octance entertainment.

Australia's Top Gun Joel Haski will thrill crowds with his intense aerial display in the Red Bull Stunt Plane. Performing a mix of stunts and and stunning aerobatics, you won't be able to look away as Haski hits speeds of over 400 kilometres above Sandown Raceway.

Car lovers will be in for a treat with the Auto Show showcasing many of Victoria's best classic cars and high-performance vehicles today. Back by popular-demand, the Auto Show will feature an impressive line-up of award-winning collector cars, muscle cars, drag cars and more. It's paradise for any rev-head.

With kids 12 and under receiving free trackside admission, the Wilson Security Sandown 500 is the ultimate family outing. Keep the little race fans busy at the Disney Zone, where they can put their racing skills to the test at the new Cars Ice Racers ice rink and catch up with Lightning McQueen from Cars.

The kids can even try their hand at bike racing at the Motorcycling Australia set-up. Open to kids aged four to nine, the youngsters can test their skills for free on one of the mini bikes in a controlled environment, with experienced coaches and riders on hand to help them hone in on their skills. It could be the start of an exciting career.

Don't miss a second of the action at the Wilson Security Sandown 500. Click here for event information and ticketing options.