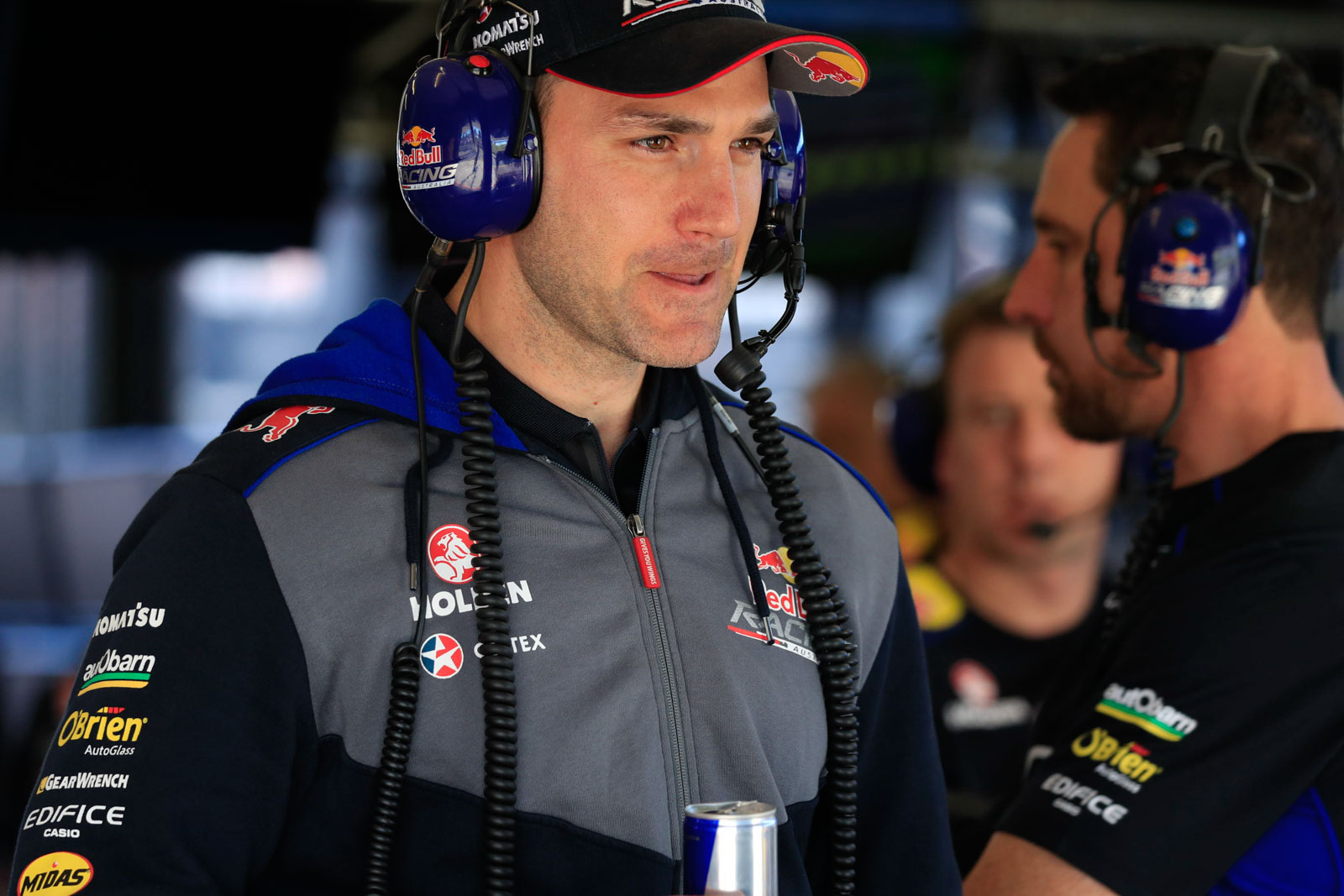 Ahead of his Inside Supercars appearance this evening, Triple Eight team manager Mark Dutton spoke to supercars.com about the feeling in the team as they approach the finale with both cars in contention.

‘Dutto’ paints the expected positive picture behind the scenes, though his reasons why the fight does mirror the old Whincup-Lowndes battle may surprise you.

VASC: What is the feeling in the team like as the finale approaches?

MD: Everyone’s enjoying the bigger gap between the races – I wouldn’t call it a break, because everyone’s still flat out – but it’s a little bit of a mini recharge before we go into it.

Everyone’s really excited but we still need to get the job done for Craig, obviously. You still don’t rest on your laurels, you do everything as if it was coming down to the wire for the actual championship – we’re happy to have that secured, it’s one less pressure, but you don’t treat it differently. You don’t get complacent, that’s not how we operate.

How would you describe the relationship between Shane and Jamie as it has developed throughout the year?

It hasn’t changed too much in the sense that they pretty much hit it off really well. If anything, it has gotten stronger during the year. I don’t think they had too much to do with each other prior to being in the same team, but these days they’re mates, they get on really well. There’s never any dramas, back-handed comments or anything like that, it’s really good. There’s not one instance of any bad words or bad blood – even in NZ with the coming together, both of them straight after the race were shaking hands.

When Jamie won his sixth title, he was asked who he sees as an up-and-comer and he said Shane. You can tell there’s an enormous amount of respect there.

It is true, I think anyway, the better the driver, they can pick up how good the other one is. I think they pick up more from watching them and seeing the skill, they see it in different eyes to what I see it. We look at it engineering-wise, but they can see the skill related to what they’re doing – so when a driver of Jamie’s calibre says that about another driver it’s a pretty big compliment.

What makes the Jamie-Shane battle different to what it was with Jamie and Craig?

Not a lot. There’s no real difference in the battle, it’s still each trying to win, each engineer is trying to make their car beat the other car, there’s no bad blood between either of them. [Engineer #88 David] Cauchi and Grant [McPherson, engineer #97] work amazingly well together, so it’s no different. It’s just new.

I think the crowd is really keen for Shane to get his first, just like whenever it was Jamie versus Craig everyone was behind Craig because he’s a crowd favourite as well – so Jamie’s always had to fight against the crowd favourite to win it. But everyone loves it.

Has it personally been a challenge for you to manage this year as you’ve become more entrenched in the team manager role?

No, it’s just been a continuation. What’s been really good throughout the year is since Townsville, I think since then we hit our strides and started having good consistency and found the pace we were after. We were fortunate enough to win some races before that but we weren’t as comfortable with our performance, so since then I’ve been able to stick my nose in the engineering less, which I’m sure the race engineers prefer. So no real difficulties, Simmo’s [Andrew Simpson, TeamVortex manager] doing a good job with Craig and TeamVortex at the track. Everyone works that well back at base that my job is made easy.

How tough is the Sydney format with the two 250km and the soft tyre?

It’s always hard because of the nature of the track with all the concrete walls – we’ve had lots of shunts there, too many! Whether it was practice, qualifying or races it’s claimed us quite a few times. The format definitely makes it a bit tougher but just the nature of the circuit’s tough, some summer storms can blow through there pretty quickly – that’s cost us before as well – so it’s just a difficult event due to location. It’s good to have a tough one to finish – no track’s easy or cruisy, but it’s a test at times, which is good.

Adrian Burgess’s question for you from last week – how many press ups a day do you do to keep those guns in shape?

They’re fading away! I try to remember to do just one set of 30 in the morning when I’m at the race track. I didn’t do any this morning.

Tune in for more from Dutto and tonight’s other special guest Brad Jones on Inside Supercars at 7.30pm ADST on FOX SPORTS 506.