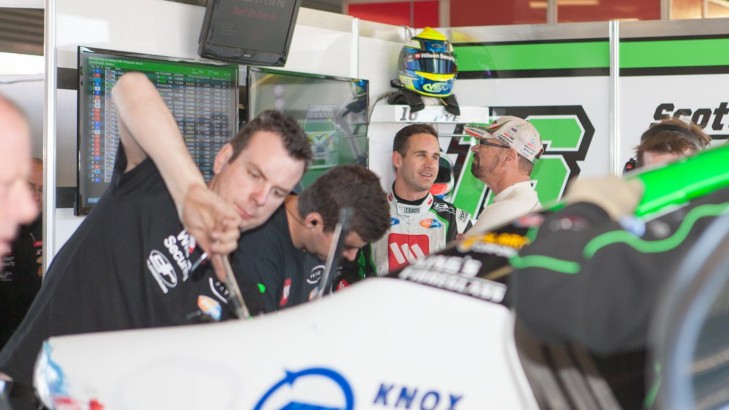 Dick Johnson Racing was initially unsure whether they could repair the #16 in time for the day's second practice session at the Supercheap Auto Bathurst 1000, after Ash Walsh's incident at the Cutting this morning.

However, the team is powering through the work, repairing the damage to the right rear of the Wilson Security V8 Supercar and is confident Championship driver Scott Pye will get a run at Mount Panorama before qualifying, with most of the damage cosmetic.

"With these cars, there's nothing really in the back of them, so if you have a big hit - look at Cameron Waters yesterday - there's nothing to stop the car just folding in," Steven Johnson told v8supercars.com.au.

"It's all fiberglass and a little bit of sheet metal, so basically it's pushed it all a fair way in and popped the rear window out as well, so they've got a little bit of stuff to fix. It's a bit of a pain."

It is the second repair job DJR has managed since the event began yesterday, with a flat tyre and collision derailing David Wall in the #17 in the first practice session of the event.

The repair of #17 - dressed in a retro livery - meant co-driver Johnson missed the dedicated co-driver practice session, and has left him light on laps as the big race approaches.

Johnson was out this morning in the co-driver session, and managed the 11th quickest time.

"I did get out at the end of the session, I did one flying lap and then we had the red flag ... for Tander. I got out for another flying lap, and then chequered flag, so I only got two laps!" Johnson told v8supercars.com.au.

"It was good I got this morning's session, so obviously not ideal. I would've liked to have had more track time in the car, but it is what it is."

Johnson had a moment in the session coming out of the Cutting, but managed to keep the DJR car clean.

"It's pretty tricky out there, and doing only two laps yesterday when everyone had done a session, trying to get a feel for the track this morning and get a bit of data for the car, the team and for my setup - it was a bit tricky," Johnson said.

"I wouldn't say it caught me out, but it was a moment and I was able to keep it off the fence and come in, put a set of tyres on and go out for a time. It wasn't too bad, just unfortunate yesterday - the boys did a good job to get it out even for the third session so just see how Dave goes in the next session and we've got qualifying to much around with it as well and we'll go from there."

DJR is running a competition with V8 Supercars to win a #17 simulator, dressed in the Shell retro livery colours and signed by Dick Johnson, John Bowe and all the Pirtek Enduro Cup DJR drivers. Click here for more information.

The V8 Supercars are on-track at Mount Panorama one final time before qualifying, with the all-in practice session beginning at 1.10pm ADT.

Steve Owen (driving with Mark Winterbottom) was quickest in the earlier run this morning.

Super Black are on track