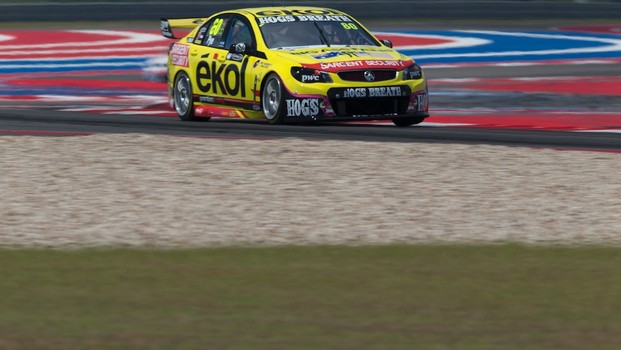 Despite his tumultuous start to the 2013 Championship, rookieV8 Supercars driver Scott Pye has declared his confidence undiminished.

When he returned at Barbagallo Raceway for the Chill Perth360, the Lucas Dumbrell Motorsport driver launched his car into the air acrossthe infield after tangling with Rick Kelly and Garth Tander at high speed inthe 60/60 sprint.

“My confidence hasn’t taken a whack,” Pye toldv8supercars.com.au. “I am feeling good.”

Nevertheless he admitted it was a goal to bring the car backin one piece at the most recent Championship event, the Austin 400 at theCircuit of the Americas.

“I kept my elbows firmly tucked in all weekend,” hereported. “It was a relief to keep the car straight for the boys so they couldhave a nice holiday as well and not stress about having to get the car ready forDarwin.

“So the Texas weekend was not damage minimisation, but itwas important to keep the car straight for the guys.”

As the 23-year old from South Australia sees it, his crashin Tasmania shouldn’t have any effect on his self-belief because it was a mechanicalissue rather than driver error.

“We had the brake failure and I believe that was somethingcompletely out of my control and it was an unfortunate thing that happened,” hesaid.

“But as a driver you just have to forget about those things.They happen and we are all prepared for them to happen, and we know they aresome of the things that can happen in this game.”

And he says he takes responsibility for the Barbagalloincident – in which he squeezed across on Rick Kelly on the main straight onlyto be turned sideways by the Jack Daniel’s Nissan and then be hit by Tander’sHRT Commodore – even though he regards it as a racing incident.

“I say it’s my fault purely to save confrontation withanyone. It’s a racing incident I think. I obviously have my opinions on it.

“I moved over to defend and Rick couldn’t go anywhere and atthe end of the day I didn’t know Garth was there until I looked out my windowand saw him t-bone me. I felt pretty unlucky there.”

Pye says his priority now is to start qualifying and racing closerto the top 10, a feat he managed early in the season but has struggled toachieve in the most recent Championship events.

“We just haven’t found a set-up that benefits ussignificantly on green tyres,” he explained. “We are gaining one or two tenths,so maybe we are just not making the tyre work properly.

“We have a lot of homework to do and hopefully we can get itsorted because the race pace is not an issue. We are passing nearly 10 cars perrace, but it’s not that rewarding when you are starting down the back, becauseyou are finishing 16th when it would be nice to be nudging the 10.”

Pye, who is a protégé of Triple Eight Race Engineering bossRoland Dane, showed his best pace in Adelaide at the season-opening Clipsal 500where managed both an 11th place qualifying and race finish. He is currently25th in the Championship.

“The pace is still there, it hasn’t really gone away,”he said. “We have had two races where we have qualified poorly, but still everyrace we have finished we have raced up to the 15.”

Scott Pye  ›
Stay In The Know
Sign up to the Virgin Australia Supercars Championship Newsletter
This website uses cookies to improve your user experience. By continuing, you will be providing your consent to our use of cookies.Ok