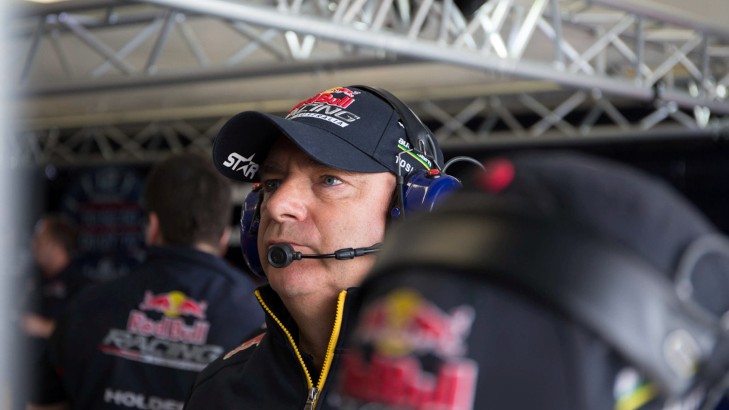 Rival team principal Tim Edwards said he was "dumbfounded" to see car #1 in the pit lane on lap 111, almost 10 laps before the majority of the field, implying that Red Bull had conceded the race by pitting early.

But Dane said it was simply a matter of working to the numbers and running a five-stop strategy for Whincup.

"We were leading the race halfway through - that safety car came at really the wrong moment for everyone," Dane told v8supercars.com.au.

"We thought we could manage the economy and then we couldn't see that we could.

"So we decided to make an extra stop, which we did - which was something the Jones cars did as well - and then just go flat out."

The safety car for Alex Buncombe on lap 75 brought most of the field into pit lane four laps short of when most could make it home safely with only one more pit stop.

When the safety car returned to pit lane on lap 79 the field was forced to conserve fuel to make it home with one more stop.

By pitting Whincup on lap 111, he would need to complete an additional stop to the majority of the field to make it to the end of the race.

"They showed how not to run a race - I think the whole pit lane is dumbfounded as to why they bailed out," Edwards told v8supercars.com.au.

"Everybody knew it was going to be tight, but it's a very strange approach to bail out that early when things like safety cars can help you out.

"We all know if you're going to get to that last stint of the race you're going to have to potentially pit [for a 'splash and dash'] - but the safety cars could change all that.

Edwards admitted there was a small window for second place finisher Chaz Mostert, but eventual winner Mark Winterbottom"wasn't tight at all" on fuel.

The crucial pass of the race - Winterbottom on Mostert - went almost unnoticed on lap 110, as Mostert was trying to get by Shane van Gisbergen for second. The young Ford driver was unsuccessful and opened the door for his teammate.

"Most people were thinking more about fuel than they were about what was going on with the race [then]," Edwards said of the critical move.

"We were listening to the whole pit lane, everybody telling their drivers to conserve - but Frosty didn't need to conserve at all, he just drove his whole race.

"Chaz was conserving a bit but that became more the focal point than that pass."

Winterbottom re-joined ahead of van Gisbergen after the final phase of pit stops, and managed to hold out Mostert by 0.65sec for his first Sandown 500 win since 2006 (with Jason Bright).

"To start your enduro campaign off like that is fantastic - first, second and fifth [in David Reynolds], is exactly what they all needed," Edwards said.

"Everyone talks about the 900 points you've got up for grabs over the three rounds, well we're a third of the way through the danger zone so to speak so it's fantastic."

After yesterday's race, Winterbottom is now out to a 198-point lead over Mostert, while Reynolds has shifted up to third place ahead of Craig Lowndes.

Mostert is the reigning Supercheap Auto Bathurst 1000 winner with retired Paul Morris, with Winterbottom winning the year prior with Steven Richards.

Ingall: The pace is hot