Qualifying for Race 23 of the Virgin Australia Supercars Championship has been abandoned due to heavy rain at Pukekohe.

Rain set in this morning, and qualifying for the opening leg of the ITM Auckland SuperSprint was due to start at 12:25pm local time.

Driving Standards Advisor Craig Baird lapped the circuit - which has been resurfaced in three places - in the Safety Car to assess conditions, with standing water the primary concern.

Drivers were eventually sent out at 12:43pm, nearly 20 minutes late, and even then only briefly.

After less than four minutes, the session was red-flagged and ultimately not restarted by a cut-off of 1:15pm.

Based on rule D6.5.1, the grid for Saturday’s 70-lap race at 4:10pm will be based on Friday’s combined practice times.

Cam Waters will start from pole position, ahead of Jamie Whincup and Mark Winterbottom. 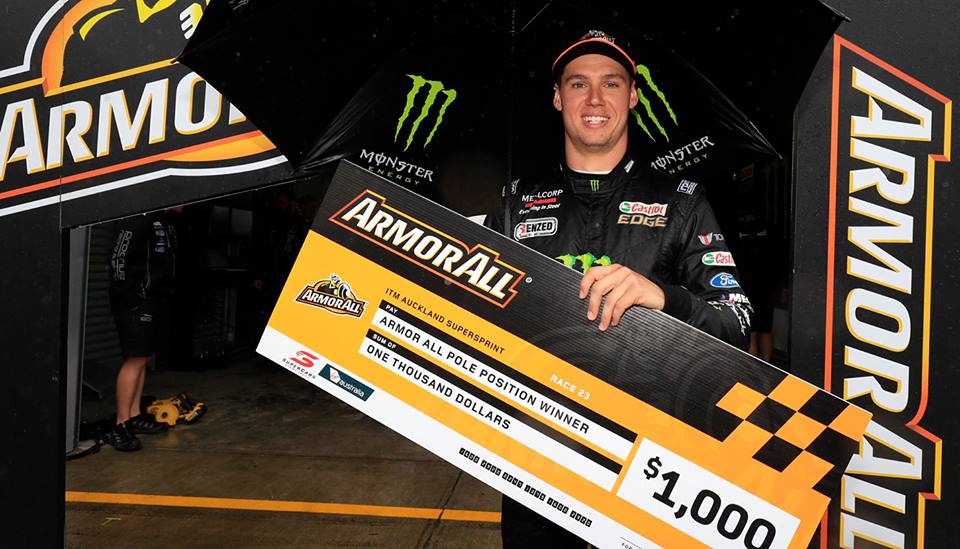 “Obviously it’s a pretty weird way to get pole, but if it’s raining you want to be out of the mess,” Waters said.

“I don’t know what to think. It’s so weird. If it’s wet like then it’s going to be chaos down that back straight because it’s so slippery.

“Hopefully the rain stops and it dries up a little bit, but we don’t really know what to do with the car or anything, it’s a bit of a guessing game I think.”

A total of 12 drivers managed to set a single time, led by van Gisbergen on a 1:18.9550s, to sit 1.1231 seconds clear of Red Bull Holden Racing Team stablemate Whincup.

Van Gisbergen then went off at Turn 1 immediately after recording his time, and said the newly-resurfaced back straight was the biggest problem.

“No good,” the defending champion surmised.

“I did a lap at half-throttle down the back straight and said ‘this is stupid, I’m pitting’.

“Too new on the surface, so shiny and slippery. I don’t want to be out there on that stuff, it’s a joke. That level’s just too much.

“I didn’t even get to full throttle on that lap, so I’m not even looking at the times, it was stupid.”

Will Davison,  Coulthard, Garth Tander, Jason Bright, Mostert, Waters, Winterbottom, James Moffat, McLaughlin and Scott Pye were the other drivers to get a time on the board.

McLaughlin went off at Turn 1 on his flying lap, while Craig Lowndes and James Courtney completed a tour but had their efforts scrapped for overshooting the back chicane.

“Most of the circuit was actually quite good, not that bad, but the back straight with the new surface feels like standing water,” Nissan’s Michael Caruso said.

“I asked my engineers what I got to and it was about 30 percent throttle.”