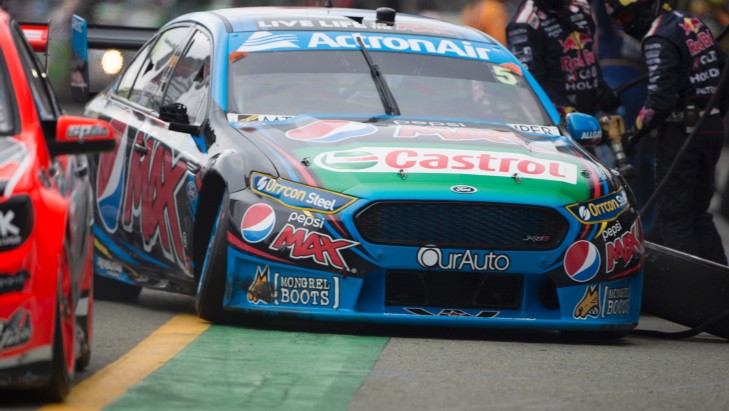 Prodrive says its 50 point team's championship penalty for an unsafe release of Mark Winterbottom during yesterday's opening 300km race at the Gold Coast 600 is a fair cop, but team principal Tim Edwards has delivered impassioned support for car controller Chris 'Tooly' O'Toole who has taken responsibility for the error.

Pepsi Max Crew is fighting to win Prodrive's first ever teams' championship and the penalty has reduced its advantage over the Holden Racing Team to 580 points, with perennial winners Red Bull Racing third a further 16 points behind.

The team's championship delivers not only prestige but pitlane position choice and a year-long strategy advantage. Up to 600 team's points per round are available and the Pepsi-Max squad must finish off the season without the points contribution of injured young star Chaz Mostert.

Russell Ingall is deputising for him this weekend with Cam Waters, while the development series leader is also in the car for the next two sprint events.

"Without Chaz we have got a fight on our hands to win the championship."

O'Toole is a founder member of the team, first established as Ford Performance Racing in 2003. He also serves as the four car Prodrive squad's team manager.

He gained certain notoriety in 2013 when he gave the thumbs up to his crew while Whincup was completing a drive through penalty for spinning wheels in a pit stop during the Darwin V8 Supercars championship round. Whincup later labelled the gesture "disgraceful".

"He's [O'Toole] pretty devastated as you can imagine. He knows, it's one of those things, the circumstances all prevailed against him.

"Unfortunately he's the car controller so he knows he's in the firing line, but the reality is me slapping him around the head is not going to achieve anything. He knows he made a mistake and he'll do his utmost to make sure it doesn't happen.

"Every time it happens in the pitlane, you don't very often see drivers getting stuck into their car controllers because they know it's a pressure job. I've done it in Formula One and it's a horrible job.

"You're trying to watch all the people around the car to make sure everyone's safe, watch the pit lane, it's not an easy task and it's a thankless task and for the 100 times you get it right, no one says well done, but one time you get it wrong everybody wants to get a shotgun out.

"He's taken it personally but there's no point taking him out the back and shooting him, there aren't a queue of people lining up to do it. It's a thankless task and that applies to the whole pitlane because it happens quite regularly up and down the pitlane.

Winterbottom's Falcon hit Garth Tander's HRT Commodore VF and then deflected left into a tyre next to Craig Lowndes' Commodore which was also pitting. While the incident caused some RBR crew to scatter quickly, no-one was injured.

"If the Stewards thought that's right it's for a good reason they gave them a 50-pointer as well (as a pitlane drive-through penalty).

"So you can't just let it go and put people at risk - the mechanics more than the drivers. The drivers are a little bit protected but the guys who nearly got flattened I'm sure they weren't happy with it."

"With such big points available each round, Burgess says the top three teams are all still in contention for the championship.

"There's a long way to go - we'd love to finish second, we'd love to finish first, but it's not over so you've got to keep punching on and getting the most out of every weekend you can. If we can catch them great, if we can stay in front of Triple Eight that'd be good as well."