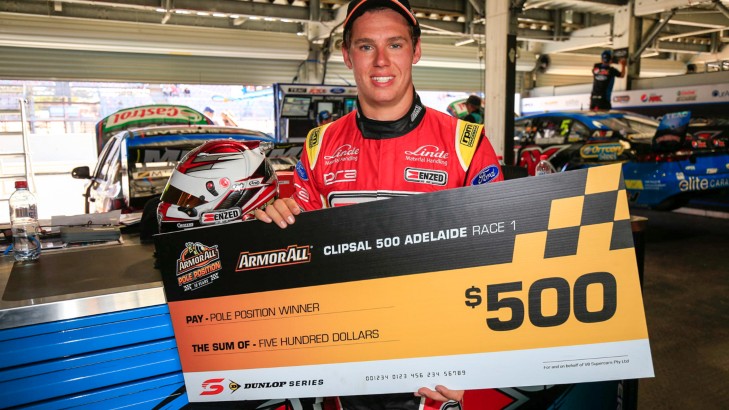 The fast-paced duo will debut their partnership later in the year with the aim of defending Mostert's 2014 Supercheap Auto Bathurst 1000 crown.

"To get the call up to the main series again is awesome," Waters says.

"I really enjoyed working with Jack [Perkins in the fourth car] last year but working with Chaz this year will be an awesome experience. He's the defending Bathurst Champion so the pressure is on to back that up but I think we can do it.

"The series will be massive for me, I'll be in both the Dunlop Series and the main series for the Enduro Cup but I'm really looking forward to it."

Mostert was confident in the pairing particularly given Waters' impressive form in the Dunlop Series this season - he won all three races in Perth and leads experienced competitor Paul Dumbrell in the standings.

"It's great to be paired with Cam," Mostert said.

"We already know each other pretty well; he's a great guy and a great driver so it's awesome to have him on board.

"He's doing really well in the Dunlop Series so that gives me a lot of confidence.

"The FG X will be a bit different compared to what he's driving at the moment but he's pretty adaptable and a good driver so I can't wait to see what we can do."

Steve Owen will once again pair with Mark Winterbottom for the second straight year after the duo finished fourth overall in last year's PIRTEK Enduro Cup.

Owen hopes to go one better in 2015 while supporting Winterbottom's Championship campaign.

"Knowing the team, the drivers, the cars and those sorts of things add up to getting a better result so it's exciting to be back with Mark. It's a good time to be with the team, the cars are really quick at the moment and Frosty's doing really well so I can't wait."

Dean Canto will join David Reynolds for their fourth consecutive year in the #55 The Bottle-O Racing FG X Ford.

Reynolds and Canto have enjoyed success in the past with a win at the Gold Coast 600 in 2013 and a second place at Bathurst in 2012; however Canto believes this year is all about making up for lost opportunities in 2014.

"Dave and I work well together as a team. We always put in a strong challenge and I like the way that the car is set up," Canto said.

"Watching from the sidelines it looks like the team has put a strong package together with the new car so I can't wait to get in it."

Owen and Canto will get their first chance to experience the Prodrive Racing FG X Falcon during the two 60-minute practice sessions on Friday at this week's Winton SuperSprint.