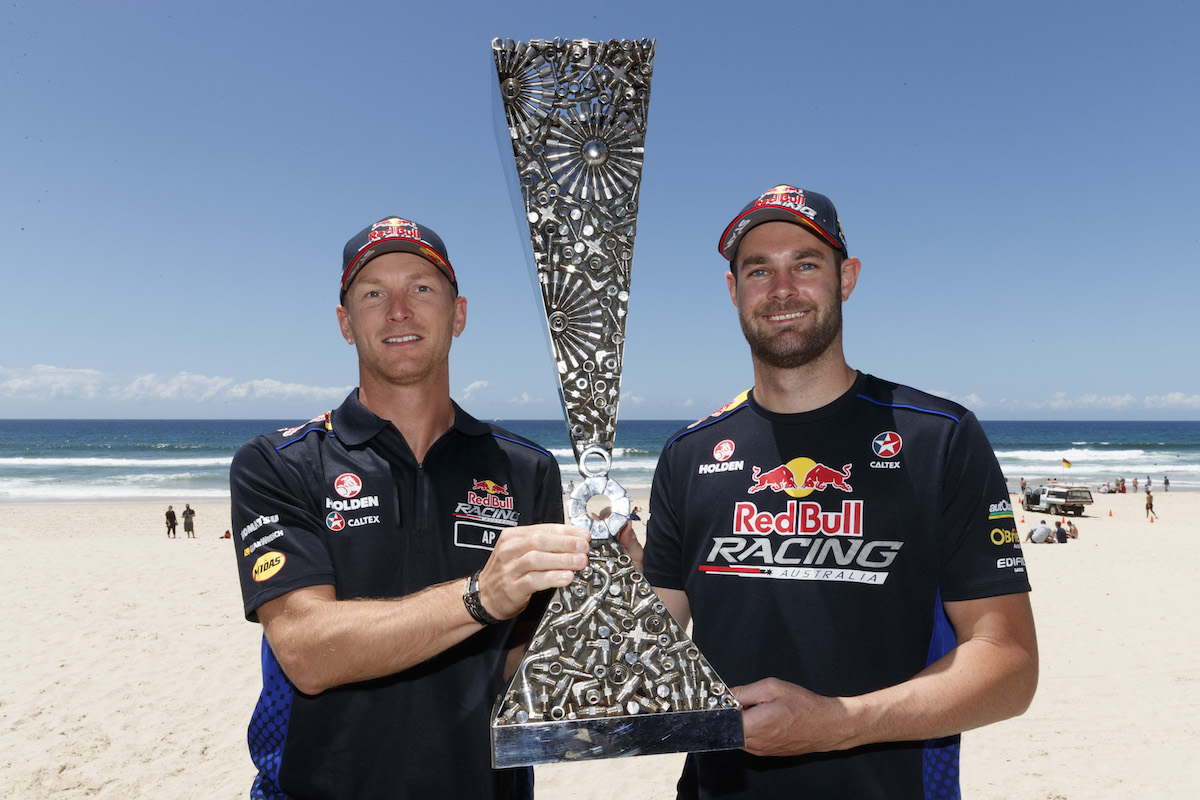 After clinching the Pirtek Enduro Cup with Shane van Gisbergen yesterday, Alex Premat says his next goal is to return to Australia in 2017 and win the Supercheap Auto Bathurst 1000.

Finishing second in the prestigious race by a mere 0.14 seconds this year – the closest competitive finish in history – Premat’s weekend victory on the Gold Coast has just added to his desire to take out Australia’s biggest race with current championship leader van Gisbergen.

Today the pair celebrated winning the impressive endurance trophy in Surfers Paradise after what Premat described as an “emotional” weekend. He said that while he and Triple Eight boss Roland Dane were still negotiating his return next season, the right drive for Bathurst is top of the list for him.

There was some doubt about his race fitness from the media heading into this year’s campaign, with Premat taking on a number of major races and different drives throughout the season, but he proved his critics wrong and will be looking for similar preparation next year.

“Year from year it’s always different, so I’m in contact with a few teams for next year doing, like, an LMP2 program, GT program in Europe or worldwide, so I’m just looking at that, waiting on that,” Premat told supercars.com.

“I know there is always some clashes with the races in V8 Supercars, especially Sandown – but target number one is to come back in the V8 Supercar and win Bathurst.

“My priority number one is V8 Supercars, so if I have a double program, for sure, if there is a clash I will miss a race.”

The 34-year old said he would speak with Dane about 2017 but hoped to be back with van Gisbergen.

“Yeah, we’re still talking but for sure he’s been very pleased … with the job I did.

“I was pretty solid for those four races, so for sure, winning the Pirtek Cup we’ll be talking about that.”

One reason some had questioned the Frenchman’s suitability to pair with championship contender van Gisbergen was his tumultuous record with Garry Rogers when he started as a full-time driver. But, Premat says, it’s different in a Triple Eight car.

“When I was the main driver with Garry I was very pleased, but the car was not as was expected, it was hard for me to go in the top 10,” he said.

“But it would’ve been different in a Triple Eight car in the time when I started.”

Dane knew putting Premat in the right car and environment would bring out the best in him.

“He’s been very good and I am very happy with him,” Dane said.

“We haven’t spoken about the future yet but I am sure we will.

“I am very happy that not only he did a great job, which I was sure he would, but my choice and Shane’s support was vindicated.

“I don’t think he has put a mark on it over three weekends.”

An error by Premat in a safety car restart in Saturday’s race meant a 10 second penalty, taken at the team’s pit stop, but it couldn’t prevent them from winning the race. Dane was satisfied with his recovery.

“He was then asked to extend himself for the first time from a speed point of view and he did, he pulled out seven seconds when he handed it over, so he did his bit there as well.”

Jamie Whincup’s co-driver Paul Dumbrell is yet to put pen to paper for 2017 – Dane explained their usual process.

“With him I just ask him if he is happy and he says yes or no and he has always said yes, and I am sure we will ask the same question soon.

“I don’t think he wants to stop doing it, I have no reason to think he does, he just wants to make sure he is doing enough other stuff during the year to keep himself sharp.”

Steven Richards, who drives the TeamVortex third Triple Eight Commodore with Craig Lowndes, has another year on his contract with the team.