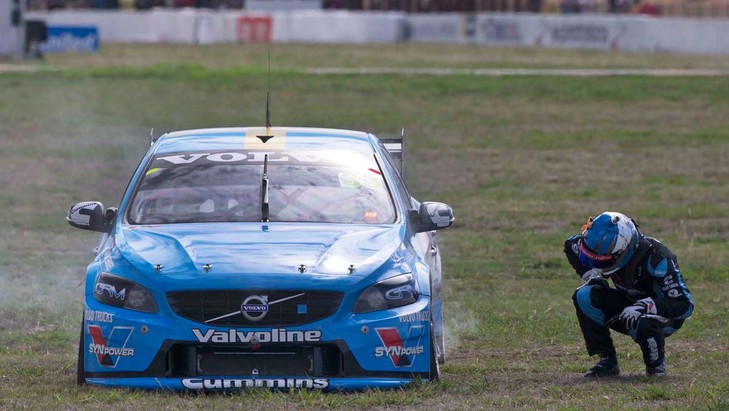 Fixing the electrical issue that robbed Scott McLaughlin of a potential first V8 Supercars Championship race win for Volvo at the Winton 400 yesterday has become priority number one for the Volvo Polestar team.

The 20-year old New Zealander was leading the second 100km Championship race at the country Victorian circuit when he was called in to have the battery changed in his Volvo S60.

“We noticed he was losing battery voltage and we wanted to get him in before he stopped out there,” team manager Dean Cowling told v8supercars.com.au.

“We changed the battery and went on but we are not getting any charge at the moment so we will have to go through and find out what the issue is there.”

The power drain that forced the pit stop was similar to the issue that eventually forced McLaughlin’s retirement from Race Three of the Championship at the Clipsal 500.

Frustratingly for the team, it reoccurred after a persistent power steering issue that has intermittently bedevilled the team since the S60s first ran at the official category test day at Eastern Creek in February appears to have been resolved.

“It looks like we may have got on top of the power steering issue,” Cowling said. “We haven’t been able to exactly pinpoint what the issue was, but we have changed just about everything and done some fundamental changes under there.”

McLaughlin’s Race Eight heartbreak at Winton yesterday followed on from his retirement from Race Seven when the Polestar developed B8444S 5.0-litre V8 engine in his S60 lost the water pump belt and over-heated, forcing a rushed change between races that saw him late to the grid.

The Volvo team also had to change teammate Robert Dahlgren’s gearbox after he was forced to retire from Race Seven.

But it is the power drain which the team has identified as the number one issue it must resolve before the next Championship event, the ITM 500 Auckland at Pukekohe in New Zealand on April 24-27.

“We have done a lot of things and implemented a few ideas to stop it happening but I don’t think we have quite nailed it,” Cowling admitted. “We have to look into it and come up with a solution because it has happened twice now and we can’t continue on like this with the same problem.

“We have seven days back in the workshop and we can definitely implement something in that time and will do for sure. It’s priority number one.”

While displaying front-running pace in McLaughlin’s hands since the Clipsal 500, the Volvo has also encountered various issues, many of them related to them to the significant vibration created by the engine’s flat plane crank.

McLaughlin qualified 12th for Race Seven and on the front row for Race Eight, showing the handling of the S60 hadn’t been significantly affected by last week’s move of 20kg of ballast from the bottom to the top of the engine.

“We will just work with it and do what we have to do to make it similar with the rest of the field. But I don’ think it is going to slow us down.”

Scott McLaughlin  ›
15' Wilson Security Racing GRM ›
2014 Winton 400  ›
Stay In The Know
Sign up to the Virgin Australia Supercars Championship Newsletter
We use cookies to ensure that we give you the best experience on our website. If you continue to use this site we will assume that you are happy with it.Ok