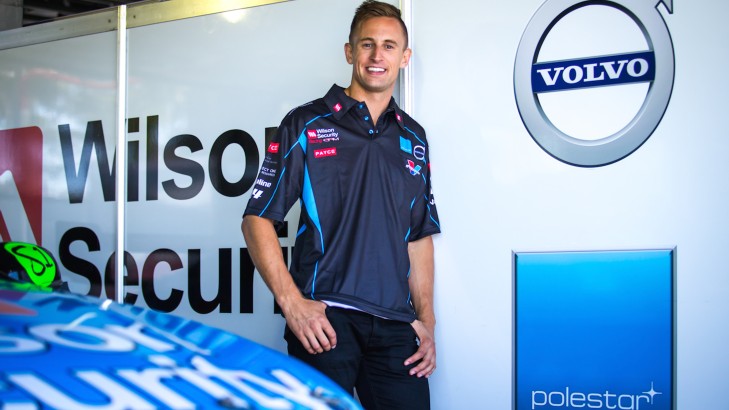 Following a successful stint at the Australian Grand Prix in the #34, Chris Pither has today been confirmed as a Wilson Security Racing GRM co-driver.

Pither will pair with David Wall in the Volvo S60 for the 2015 Pirtek Enduro Cup, completing the team's line-up after Alex Premat was confirmed to return with Scott McLaughlin in the sister car.

Pither joined the team for the support races at the Australian Grand Prix earlier this year, filling in for Wall after he suffered substantial burns to his foot at the season opening Clipsal 500.

The Kiwi recorded a best result of 19th across the four support races - his first time in the Volvo - and currently sits fourth in the V8 Supercars Dunlop Series title race.

"Obviously I got a bit of a taste for it at the AGP and it was the first time in the car that weekend, and that gave me an insight into how they operate and what the cars are like - so I'm pretty excited and grateful forthe opportunity."

Pither has paired with Wall previously at Brad Jones Racing, and though it will be his fourth consecutive time as an endurance co-driver, it will be his first run with a different team over that period.

"I get along with well with David, we're a similar size, so there are a lot of good things about the partnership.I guess we'd be looking for a reasonable finish - we want to aim high," he said.

According to team boss Garry Rogers, selecting a co-driver was a hard decision, given the team's long-time association with Greg Ritter - but Pither's racing inthe Dunlop Series pushed him over the line.

"It was a difficult choice with Pither as we had been approached and were talking to several other eligible drivers including Greg Ritter who has done a great job here over many years," Rogers said.

"In the end with the intensity of the endurance races it is more important than ever to have drivers who are competing in current high level racing.

"Alex is racing overseas and Chris has competed in the Dunlop Series for several years and is competing in that series again this year."

A number of teams including Nissan Motorsport and Brad Jones Racing are yet to name co-drivers, with Prodrive Racing (Australia) to confirm pairings soon.