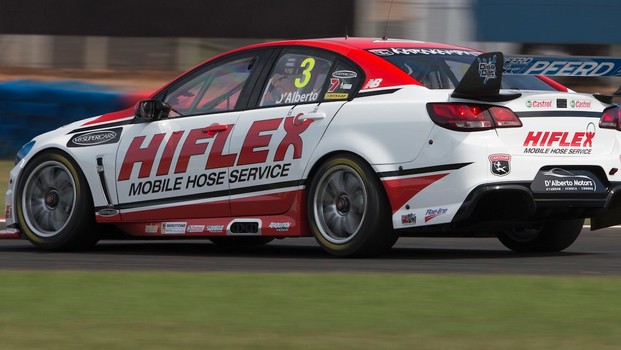 Back in the old days single-car V8 teams were not uncommon,but in 2013 only Tony D’Alberto Racing can claim that distinction.

Nowadays racing as Team HiFlex, Tony and father Al graduatedinto the main game in 2008 after winning the Dunlop development series.

The changeover has brought some fresh faces to the pit crew,joining some longer serving team members. Let’s meet them now (pictured left to right).

Melbourne-born and bred Sasso studied as a mechanicalengineer and then started his racing career as a junior mechanic with leadingtouring car privateer John Faulkner in 2002.

After one year he shifted to the Holden Racing Team. Overthe years he has spannered and engineered a variety of Clayton Commodores thathave raced in HRT and other colours.

Sasso worked as a mechanic for Todd Kelly and Mark Skaife,was part of the crew for Peter Brock’s last Bathurst outing and was there whenJames Courtney and Ryan Briscoe debuted in endurance events for HRT.

Sasso data engineered Paul Dumbrell and Andrew Thompson inWalkinshaw entries and was then crew chief for Fabian Coulthard in his lastyear with the team. In 2012 he was back in HRT colours as data engineer forGarth Tander.

Sasso signed on with TDR this year when the small privateerteam re-formed its technical alliance with Walkinshaw Racing.

Explain your nickname: “They call me Sassman, which ispretty self-explanatory.”

Melbournian Kerr started on the other side of the pitwall 10years ago racing Formula Fords at Victorian state level and selected nationalrounds.

Before retiring from the cockpit he even raced against ayoung up and comer by the name of Tony D’Alberto!

Kerr ran his own IT business for some years but sold up topursue a career in motorsport. He started with Formula Ford constructor MikeBorland in 2006, engineering Scott Pye, Ash Walsh and Nick Percat along the way.

Kerr then shifted to the Lotus Racing Formula One team –which has since become Caterham F1 – as a mechanical design engineer. Impendingfatherhood drove a decision to head back to Australia late 2012.

The position of performance engineer at TDR was set upthrough Steve Hallam, the chief of Walkinshaw Racing, which is TDR’s newtechnical partner in 2013.

Explain nickname: “TJ, because my middle name is James.”

Originally from Rotorua in New Zealand, Maisey grew up helpinghis father out with his Classic and Holden HQ racing before and after thefamily moved across the ditch to Sydney.

The 28-year old got a taste of V8s doing work experience forLarry Perkins while still at school and then completed his motor mechanicapprenticeship at a high-performance workshop.

Maisey moved straight from hisapprenticeship to PWR in Melbourne in 2005, when it was branded as SupercheapAuto Racing. He started as Paul Weel’s number two and then filled the same rolefor Cameron McConville.

When PWR closed at the end of 2007he moved to Sprint Gas Racing working as number one mechanic for the late JasonRichards and from there moved to TDR in 2009 as Tony D’Alberto’s tyretechnician.

Freshly married, he took a year awayfrom racing in 2010 and then ran David Wall in the TDR development series entryin the first half of 2011.

From that point and on through2012 and into the current season Maisey has been back in the main game workingon D’Alberto’s car.

Working for TDR is the fullyaccredited motor mechanic’s first full-time job in motor racing. Hisfabrication skills have come along the way, developing his knowledge as hewent.

Milton started with TDR at PhillipIsland in 2011 after getting bored with the street-car scene and applying foran advertised job with the team.

He has been the number twomechanic on the main game car since Bathurst 2011.

“I just needed something to challengemyself again and there is nothing much more challenging than doing this,” MIltonsaid. “It tests everything you have got basically.”

Explain your nickname: “Chardonnay.It’s actually on my pit helmet. Apparently I like to have a bit of a whine attimes.”

“I knew Dylan previously and he gaveme a phone call and said ‘I hear you are over here driving trucks, do you wanta job?’. I think that was on a Tuesday, I jumped on a plane on the Sunday andstarted on the Monday,” the 34-year old recalled.

“It’s my first job in motor racingand I love it. I have always loved the V8s and always watched them on TV. Ithas always been a dream to drive a transporter for the V8s and the dream has cometrue.”

Explain your nickname: “Trucky,what else?”

Tony D'Alberto  ›
15' Team CoolDrive ›
2013 Sucrogen Townsville 400  ›
Stay In The Know
Sign up to the Virgin Australia Supercars Championship Newsletter
This website uses cookies to improve your user experience. By continuing, you will be providing your consent to our use of cookies.Ok