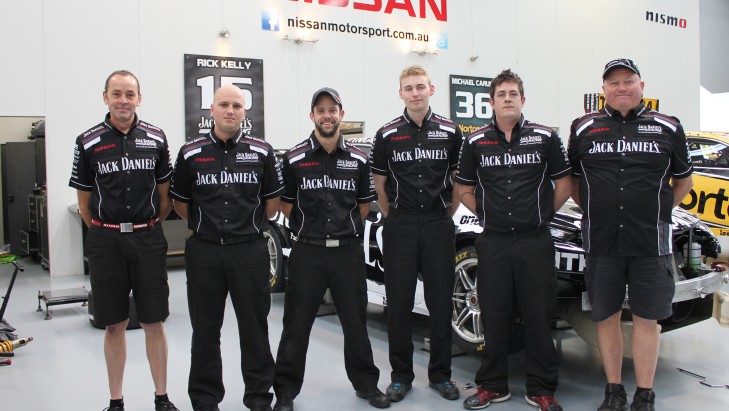 Rick Kelly is one of the young veterans of V8 Supercars racing. At just 31, he has more than a decade's full-time racing in the Championship.

These days he is one of four drivers representing the Nissan Motorsport factory V8 Supercars challenge, driving the number 15 Jack Daniel's Altima.

There is no doubt the Altima is a more competitive package in 2014, which is great news not only for the driver, but also the hard working group who put 15 on-track at every event.

As is typical of a V8 Supercars crew, these guys come from varied backgrounds and have different motivations for being in pitlane. Meet them now (pictured left to right).

Erik learned his craft as an apprentice mechanic at a Brisbane Alfa Romeo dealership. He also got his taste for motor racing there via the Alfasud series ran at Amaroo Park, spannering Dick Johnson's car one year.

From there he progressed into a long career in openwheelers, working in both the Formula Two and Formula Holden categories, winning various championships along the way.

Erik made the shift to V8 Supercars in 1999, joining TWRA (or what is now known as Walkinshaw Racing) to work for the Holden Young Lions as an engineer, which ran Todd Kelly and Mark Noske. He also regularly worked on the HRT Commodores during this dominant era for the red cars.

But over the years he became intrinsically associated with the 'other' Clayton team as it evolved through various identities; HYL, Kmart Racing, HSV Dealer Team, Autobarn Racing, Bundy Racing and Supercheap Auto Racing.

The highs came in two distinct periods; 2003-04 when Greg Murphy and Rick Kelly won Bathurst back-to-back in Kmart Commodores and 2006-07 when the HSVDT won the Drivers' Championship courtesy of Rick Kelly and Garth Tander and the Teams' Championship both years also.

Erik was the engineer for all bar Tander's triumph.

The tight-knit crew was broken up to try and rebuild HRT in 2008 and Pender was left to look after the other mob. By late 2012 he felt it was time for a change and he accepted an offer to join Nissan Motorsport and reunite with Rick Kelly and the rest of the Kelly family.

"In hindsight it was the best thing because within a week the passion was back, it was just instant," Erik said.

He and Rick combined to be the top finishing Nissan in 14th place in the Championship in 2013 and with the aerodynamic updates to the Altima for 2014, have looked even more competitive.

From Charters Towers in northern Queensland, Jesse got the motor racing bug from his motorcycle drag racing father. When he shifted to Melbourne to undertake his mechanical engineering degree at RMIT he discovered corners courtesy of Formula SAE.

Jesse was hooked on V8 Supercars by the time he graduated and was hired in 2011 by Nissan Motorsport to a position combining design and data engineering.

He initially spent most of his time designing components for the team's new Nissan Altima V8 Supercar, but these days it's balanced out to a more 50/50 role as Jesse looks after the data for both Rick and brother Todd's Jack Daniel's Commodores.

"I wouldn't mind being an engineer sometime," says Jesse, "but you have to look after people like your driver too much. I just like looking at the numbers and do what I can to make the car go faster."

It was inevitable David would become a V8 Supercars mechanic, considering his uncle Peter Byrne was a 'mule' at the legendary Holden Dealer Team spannering for the late Peter Brock.

After completing his mechanic's apprenticeship at a Holden dealership, David joined Perkins Engineering as a workshop hand, and then made the transition to Kelly Racing when the two racing operations joined forces.

David has also taken over the role of car controller at pits stops for car 15 and 7 in 2014.

From Leicestershire in the UK, Tom is in Australia on a 12-month working holiday and literally walked in off the street last February to apply for a job at Nissan Motorsport.

The 22-year old wasn't a novice through, having worked in British motor racing for five years in categories such as GT3 sports car racing.

The next step for Garwood is to figure out if he wants to gain sponsorship and stay working in Australia for a few years: "I do enjoy it and this is a good facility to wok in."

After 12-year old Curt built a roll-caged billy cart with his dad his career path was set; he was going to build V8 Supercars.

Curt joined Kelly Racing as an apprentice fabricator in 2012, which meant he played an integral role in building Nissan Motorsport's four Altimas.

At race meetings Curt is responsible for fuel supply to the Jack Daniel's garage, is left-rear tyre changer on 15 and 7 at pit stops and looks after bodywork repairs for number 15. He also oversees large smash repairs for all four Altimas at events.

Having raced off-road for around 20 years, it's no surprise Ian works full-time in motorsport.

"I've been racing things since I was about 12," he said, graduating frommini bikes as a child, tomotocross and off-road racing.

Yamaha sponsorship during his off-roading days led him to V8 Supercars, when a role came up within the brand's motorsport program, which then included the Championship.

In 1999 he accepted a job at Gibson Motorsport, which led on to a position at Kmart Racing (Walkinshaw Racing), beginninghis relationship with the Kellys that has now stretched on 13 seasons "in one way or another".

When Todd and Rick begun their team, Ian continued on with them and now drives and maintains the Jack Daniel's transporter, looking after the tyres and wheels for the race cars at the workshop.

Nickname: Foo. "It's something I've had since state school. It's something to do with my last name. Somehow it has just stuck over all these years."

Rick Kelly  ›
15' Jack Daniel's Racing ›
2014 Coates Hire Ipswich 400  ›
Stay In The Know
Sign up to the Virgin Australia Supercars Championship Newsletter
We use cookies to ensure that we give you the best experience on our website. If you continue to use this site we will assume that you are happy with it.Ok