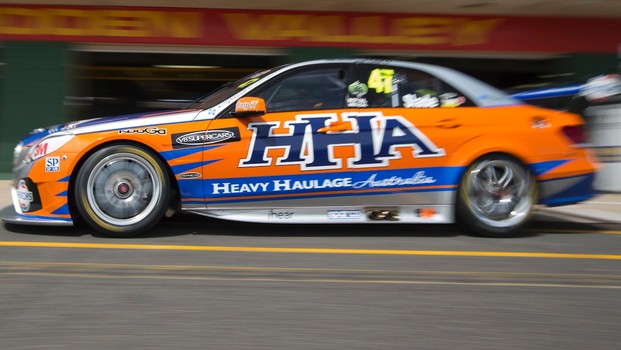 The team behind Tim Slade’s #47 HeavyHaulage Australia Racing Mercedes-Benz E63 AMG spoke to v8supercars.com.auabout their roles and love of motorsport (pictured below left to right).

Slade achieved his best result for the new manufacturer on the weekend at Hidden Valley Raceway, recording sixth in Saturday's race.

Having worked on the cars of twoChampionship winning V8 Supercar drivers in Marcos Ambrose and James Courtney,McDougall has a wealth of race experience.

Not just limited to V8 Supercars, McDougallwas race engineer with Lister Sports Cars – meaning he was part of theteam for the Spa 24-Hour as well as Le Mans 24-Hour races – after hegraduated from his mechanical engineering degree at Monash University inMelbourne.

“I originally started in motorsport when Iwas still in high school – I worked on a Formula Ford team called BorlandRacing Developments,” McDougall said. “I did that in year 11 as a workexperience thing and ended up staying for seven years.”

After graduation McDougall headed toEngland to work for a few years. On arrival home in Australia in2005, he became data engineer for Ambrose in his final year with the team, before becomingrace engineer for Courtney, then Alex Davison. He has been with Tim Slade sinceSlade started with the team in 2010.

“I’ve probably got a few highlights– we got three podiums in a row with James Courtney in 2006, ’07 and ’08 (atBathurst); and then Queensland Raceway with Tim in 2011 when he got threepodiums in a row (over that weekend).

“And then it has to be the Pole Positionwith Tim at Homebush, that was the standout last year.”

Explain your nickname: “It’s either Wesmo –Wes with ‘mo’ on the end, for no real reason – or Snipes as in WesleySnipes.”

“My story is a bit more boring because I’monly a baby!” he joked.

Having started with Erebus Motorsport V8last year, Mason said he hadn’tlooked back since.

Mason grew up in Western Australia and said his motorsport story began in his first year of university when becominginvolved with Formula Ford team Fastlane Racing. At the time, the Bachelor of Technology inMotorsport, offered by Edith Cowan University, was an up-and-coming course– so Mason enrolled while working with the race team.

He had an attempt at working in motorsportin America, but it is a hard nut to crack – so through contacts he secured thegig with the team, which was then Stone Brothers Racing.

His highlight in V8 Supercars was the GoldCoast event in 2012 when Slade raced with David Brabham. The car finished inthe top five in both races.

“I do a lot of the strategy side being thedata engineer, and in the Sunday race we nearly pulled one out of the hat!”

Explain your nickname: “I’ve got a couple –Laidback, Laidback Luke because I’m the most relaxed guy in the team, and Willyas in Willy Mason who plays rugby league. Being from WA I know nothing aboutthe NRL, so that one’s kind of stuck.”

McDermott grew up in New Zealand with hisfather racing cars, so he has always been around motorsport.

He began working for the team in 2004 andmoved from his home country to Brisbane in 2007.

“Working with Marcos and Russell in theearly days was pretty cool,” he said.

Again last year’s pole position and fifthin the Championship were highlights for the 27-year old, as well as Courtney's Bathurst results.

After studying at Wodonga Tafe, Hawkinsfirst worked with a small Development Series team before beginning with StoneBrothers Racing in 2007.

“I raced motorbikes all my life and it wasjust a progression from there, something cool to do,” Hawkins said of hisinvolvement in motorsport.

“I enjoy the pressure of it all, I think.That’s one good thing that keeps you interested and keeps you coming back.”

Hawkins said once he had a small taste ofthe motorsport life he wanted more.

He also counted two Bathurst podiums withthe team as career highlights, as well as race wins with Shane van Gisbergenwhen he was with the team, a pole position with Tim Slade and Slade's finishingfifth in the V8 Supercars Championship last year.

Having always been interested inmotorsport, Macgregor has been involved with Stone Brothers Racing for three years. While hehas been in Australia for 10 years now, he is originally from Timaru in theSouth Island of New Zealand and says he was a “late bloomer” in coming across to Australia.

“I’m a panel beater by trade and got intomotorsport through panel beating,” he said.

He has also been with Paul MorrisMotorsports and Team Kiwi, prior to Stone Brothers Racing/Erebus Motorsport V8.

“I enjoy the overseas travel – going to thenice circuits. Any time you get a chance to go around and see all ofAustralia – and working with a cool bunch of guys.”

Explain your nickname: “Donnie is mynickname, because I’m a Donald or a Don – but they call me Donnie at work.

“Are you allowed swear words?”

Tim Slade  ›
15' Erebus Motorsport ›
Stay In The Know
Sign up to the Virgin Australia Supercars Championship Newsletter
This website uses cookies to improve your user experience. By continuing, you will be providing your consent to our use of cookies.Ok