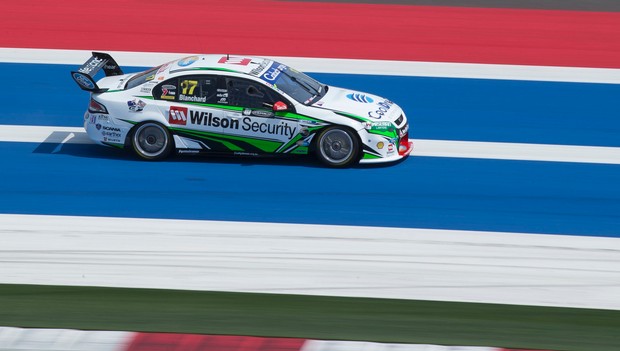 Having grown up in Ferny Grove north-west of Brisbane,Fenning got into motorsport while at university. He began as a data engineerwith DJR and has now been working as an engineer in V8 Supercars for aroundnine years.

“Everything is a challenge,” he said of therole. “It’s about getting the best out of everything you’ve got.

“The challenges are that the category is socompetitive at the moment, so you can be doing a pretty good job and still benowhere.”

Fenning said his career highlights were theChampionship win in 2010 when James Courtney was with DJR, as well as StevenJohnson’s sixth placing in the Championship the year prior.

Explain your nickname: “Rowdy. Somehow itcame from the Days of Thunder movie, there’s a character in there called RowdyBurns.”

However, fellow team member Adrian Furnesssaid: “Our engineer’s nickname is Rowdy – we call him Rowdy because he’s the veryopposite.”

Born and raisedin Brisbane, Cox was always a race fan and started getting involved in motorsport through theQueensland University of Technology Formula SAE team. He admits – sadly – henever was much of a driver.

In his secondyear with DJR, the 27-year old says he enjoys motorsport because there is nevera dull moment. “There’s always something going on… Data engineer is a prettywide-ranging and varied role.

“I look after the sensors and datalogging/analysis, the electrical/electronic systems on the cars, radios andtelemetry and various other bits and pieces as required. During races I keep aneye on all the car vitals, driver performance and assist the race engineerswith pit stop strategy.”

Explain your nickname: “J-rod. Not veryexciting, just a slight variation on my name that somehow stuck – probablybecause it’s easier to spell.”

"It goes back into the '70s," Howland said of his career in motorsport. "My friendswere in motor racing.

When working in Formula One, Howland met Alan Jones, and years later in Australia Howland ran into Jones at a V8 Supercar meeting. Before he knew it, he had a job in the truck for Development Series team Howard Racing.

Howland was with the team eight years, andduring that time it had a string of good results, including Championship winsand podiums.

“I think if you look at the records we remainthe most winning-est team in the Development Series.The only other one fairly close was Dick Johnson Racing.”

Before joining DJR – his role is splitbetween being the ‘trucker’ and tyre technician on car 17 – Howland spent 12months with Bundaberg Red Racing with Fabian Coulthard.

“It’s a lot more intense and harder whenyou step up (to the main game) – as it should be.

“I have a passion for motorsport and fortrucks and I get the best of both worlds here.”

Explain your nickname: “I have had several,but not here – they just call me Doug here. When I was with Howard’s they justcalled me ‘Trucker’.”

After completing his apprenticeship in NewZealand, Furness moved to the Gold Coast and began with DJR as number twomechanic on 17, before being promoted to number one in mid-2012.

The 26-year old says the travel is the bestand worst part of the role: “And finishing a weekend on a high is always nice,which we haven’t had this year, but we’re hoping for. That’s what keeps youcoming back.”

Explain your nickname: “I haven’t reallygot a nickname yet. They keep trying to give me one but they change it everycouple of months… We don’t really have nicknames on this side. I don’t knowwhy.”

Having started in the machine shop, 30-yearold Anspach has been with DJR five years. He only just recently switched to themechanic role, which sees him assisting with the general maintenance and upkeepof the car, as well as refueling and looking after various things in the garageon race weekends.

“I try to make Adrian’s life a littleeasier, or harder, depending on the weekend,” he joked.

Anspach said he is happy with his new rolein the team. “It’s definitely a different style of work to what I’m used to, soit’s definitely challenging and something I enjoy.”

Explain your nickname: “There’s nothingthat’s stuck… I had one that died a little while ago.”

Tim Blanchard  ›
Stay In The Know
Sign up to the Virgin Australia Supercars Championship Newsletter
This website uses cookies to improve your user experience. By continuing, you will be providing your consent to our use of cookies.Ok