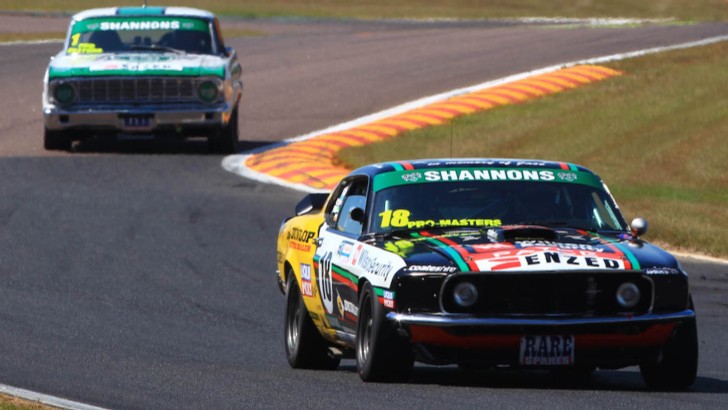 Love the intensity of the V8 Supercars championship fight? Well you're in for a treat this weekend as the support categories near the end of their 2015 journey as well.

The Undercard is here to let you know which championships are up for grabs and which drivers are in the box seat.

The Gold Coast round was a bruising learning curve for the young stars of Formula 4 with a few nasty shunts.

The round was dominated by 19-year-old Thomas Randle, who took a large chunk out of Jordan Lloyd's championship lead - if he wants to have a shot at the title in Sydney he needs another clean sweep at the Island.

This is one track where the teams have a lot of testing miles so it could be time for Luis Leeds, Jimmy Vernon, Will Brown, Harry Hayek or Tom Grech to step up and challenge the two lads that have been so dominant.

This TCM season was always destined to go down to the wire. After an epic five-way title fight (which is still mathematically on) we've boiled it down to two at the final round, Jim Richards and John Bowe.

Despite being five points down JB is absolutely the favourite here as he has been on fire since missing the Tasmanian round.

Having said that, Gentleman Jim proved anything can happen back in 2013 when he won the title at this very track.

Bowe's old car, Mustang Sally will once again be in the capable hands of Steven Johnson while we welcome experienced V8 Supercars driver Greg Ritter to the field driving Tony Hunter's Chevrolet Monza.

With their 36-car field the micro machines should put on some good slipstream racing at their penultimate round.

Brendon Pingel would have to get lost on his way to the track this week and then again on his way to the final round in Sydney to lose this championship. He does live 1500km from Phillip Island so you never know.

If he does master Google Maps, expect him to be somewhere near P1 on the racetrack.

Unfortunately Damien Flack isn't quite ready to return just yet after his spectacular Bathurst flip that was seen all around the globe but it's great that his brother, Adrian is back to throw the helmet on. I wish Damien all the best on his road to recovery.

Appearing on the bill again at Phillip Island is the local Hi-Tec Oils Sports GT class.

Designed to combine sports cars, production cars and even Targa-style rally cars the Hi-Tec Oils Sports GT racing will offer up some real variety for the purist of race fans.

- TCM: Leo Tobin is set to be crowned Pro Sport champ while Cameron Tilly has a nearly unassailable lead in the Pro Am class.

- ARC: Teenager James Abela had a troubled weekend at Bathurst only completing four green flag laps. He made the most of them passing over 50 cars!

- F4: Luis Leeds recently won the first ever Formula 4 race in Mexico. On the support bill for F1 the 15-year-old held his nerve in front of 100,000 fans, amazing effort.

- Sports GT: Keeping with the theme, it's also the last round of this series too, so they won't be leaving anything on the line.