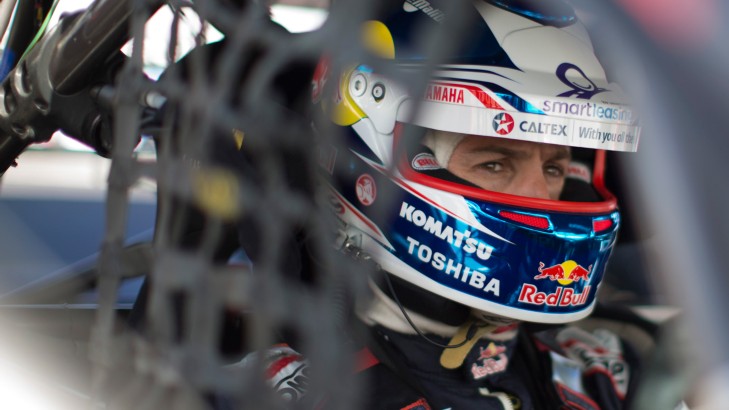 An uncharacteristic driver error from Jamie Whincup added to the difficulties of the Perth weekend for the defending V8 Supercars Champion, as teammate Craig Lowndes slipped into first and Whincup down to the fifth in thetitle fight.

Whincup admitted he and his Red Bull crew were on the back foot from day one at Barbagallo Raceway and while he said they took a big hit from an average performance on Sunday, Whincup knows the team's ability to bounce back.

He was third on the table after three events last year, dropped to sixth after Pukekohe and 12 races, and yet managed an incredible turnaround, winning the title with one event still left to contest - and that title was an historic sixth.

For now, the focus is on earning as many points as possible and improving the balance of his V8 Supercar, heading to another track that hasn't traditionally suited Whincup and his Red Bull Commodore, Winton.

"We just didn't quite have the pace, made a few mistakes and that was the story of the weekend," Whincup told v8supercars.com.au of the UBET Perth SuperSprint.

"We just didn't have any real strengths, which is no good, but we've been in this position before.

"We'll regroup quickly because we've got Winton in two weeks - we'll regroup and see what the next one brings."

The Red Bull team considers the rural Victorian circuit, next on the calendar, a 'bogey' track and last year Whincup had a best finish of ninth, after failing toqualify in the top 10. Lowndes' results were only marginally better.

"Winton was tough last year - it's a tough part of the year for me, I traditionally haven't gone that well in that middle part, so I'm just trying to hang in there and score as many points as I can," Whincup said.

"We can't afford to have things like this weekend, this [meant we] took a big hit."

Whincup admitted he didn't think Perth would be as difficult as it was. The pain started with a qualifying result of 21st in race one, and while Whincup was able to make gains in the pack, he finished 15th while Lowndes was third.

Qualifying was fine for the following two races, but a mistake on the second lap of the final race buried Whincup in the field and was just the start of what was a difficult 200km outing, the team also experiencing pit stop issues.

"I just made an error," he said. "Just locked a wheel going into the bowl, couldn't get it unlocked. I haven't done that for a long time - it was a bit uncharacteristic of me - but these things happen. When you push on the limit mistakes happen.

"Unfortunately that was the start of a bit of a snowball effect, we made a few other errors as well so not our best day at the race track."

Car balance was the issue early in the weekend and while the car clearly improved after that shock Saturday qualifying result, the progress just wasn't enough to get the #1 up to speed.

"We were behind the eight ball from the start. We did some great things but never really recovered so that was the story of the weekend, we just started off a bit slower than we would've liked and that was what ultimately hurt us."

Whincup was on the same strategy as teammate and eventual second-place finisher Lowndes in Sunday's race, running Dunlop hard tyres for the first two stints, and soft tyres for the final run home. He ran his worst set of hards first, which could've contributed to his error, and was surprised to see the rival Pepsi Max cars run a soft-hard-soft strategy that ultimately hurt them when the safety car was called for Erebus' Ash Walsh.

While his support was with his team and Lowndes, Whincup congratulated good friend Will Davison on his result - his first win with Erebus Motorsport - in what he agreed was an exciting finish to the strategy-fuelled 200km Sunday race.

"Obviously my head was with the team, I was hoping Lowndesy could stay on, but really happy for Davo [Davison] - he's tried hard for a long time with a relatively new team and great to see those guys to get the results," Whincup said.

"It was a cracker race all in all, it was all going on, all coming down to the last five laps and I knew the story because Craig had a very similar car to mine, if not the same - I was starting to struggle, and I thought, 'oh no, he's going to be in trouble here' and that was the car I had."

Whincup now finds himself 87 points away from Lowndes on the points table - last year it took him until Queensland Raceway in August to wrestle back to the Championship lead, which he then ran away with.