Perkins: ‘I’ll do my very best’ 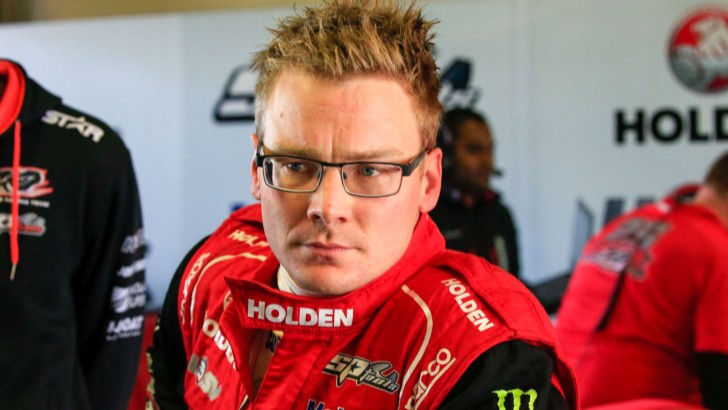 He's willing and able to take on the role of lead driver in Holden Racing Team #22, but Jack Perkins has made it clear the job is not one he would ever want in these circumstances.

Perkins, 29, is expected to be the lead driver of #22 Holden Commodore VF for at least the September 11-13 Wilson Security Sandown 500, now that James Courtney has confirmed broken ribs will keep him out of the opening event of the three-round Pirtek Enduro Cup.

And there is also a chance that Courtney, who also suffered a collapsed lung in a bizarre accident at Sydney Motorsport Park last Friday when a Navy helicopter's wash sent an advertising barrelling into his chest, will miss the Supercheap Auto Bathurst 1000.

A co-driver for Perkins is yet to be announced, but will have to be in-place by September 3 when the entire four-car Walkinshaw Racing squad tests at Winton.

"I wouldn't say that I am disappointed that I could be the lead driver, but it is such a shame and such a devastating set of circumstances that something like this has such a massive consequence.

"I signed up with James, I really wanted to be with James. He was fifth in the championship, he is no doubt one of the best guys in the category and I had mentally prepared for that role.

"But my job won't change, I will do the very best job I can for HRT whether I am the lead or the co-driver."

Originally in attendance at the Sydney Motorsport Park SuperSprint to participate in the co-driver practice session on Friday and last Monday's ride day, Perkins found himself taking over #22 from Friday afternoon onwards.

He qualified 20th and finished 19th in both races on Saturday. He then qualified 25th on Sunday and raced forward with the aid of some clever team strategy to sit in the top 10 for much of the race and eventually finish 11th.

"I was pretty underdone coming into the races obviously," Perkins said. "We had no idea that was going to happen and at the forefront of my mind all weekend was James and his health.

"So it was pretty encouraging to go from 25th to 11th and complete a dress rehearsal for the enduros. We have had practice race starts, qualifying and things and most of the other co-drivers would be pretty envious.

"I didn't put a mark on the car this weekend and I am proud of that," he added.

It was Perkins' first V8 Supercar race since Sydney Olympic Park in 2014, when his one-year stint driving Charlie Schwerkolt's PRA-prepared Ford Falcon finished without much success.

Jack has also had previous shots at full-time drives in the main game with his father Larry and Kelly Racing, also without the success he desired.

Larry Perkins won the Great Race six times, three of them driving for his own team and three as Peter Brock's co-driver in the factory Holden Dealer Team Commodores.

Jack's appearance at SMP was the first time the Perkins name had graced a factory Holden touring car since 1989.

Jack has nominated one of the reasons he joined HRT in 2015 rather than chase another full-time drive was to have the best possible shot at emulating his father and winning at Mount Panorama.

"My family has always had a big focus on Bathurst and I have a similar mentality," he said.

"I am a little bit disappointed about how that (2014) worked out. But for me it is about doing three races in the best team rather than doing the whole season in something you can't win any races in."

Perkins said he enjoyed his return to the championship at SMP, although it also reminded him of how tough it is to compete at that level.

"The whole weekend was good fun apart from the sense that I was really disappointed for James.

"I didn't have any pressure, I just went out there and enjoyed myself and the race was fun.

"We guessed there was rain coming, had a bit of fun in the rain and that brings back a bit of the enjoyment.

"But if you truly ask the drivers up and down pitlane it is hard to get enjoyment out of all of this because there is only one winner. That's the reality."

I want to win Bathurst

A matter of principle

Five things we learned at the Sydney Motorsport Park SuperSprint