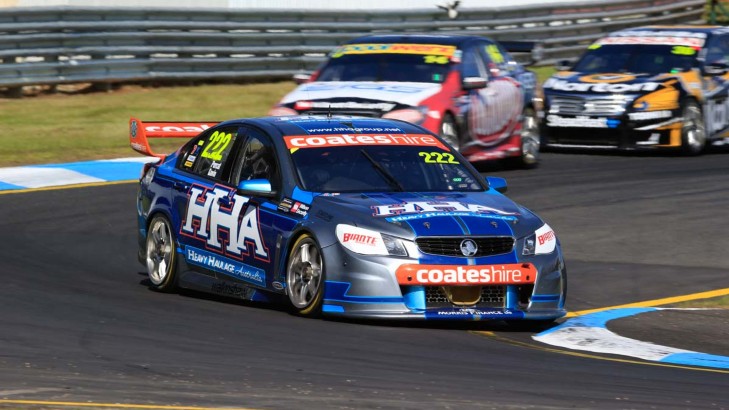 Nick Percat heads to the Supercheap Auto Bathurst 1000 in a very different position this year.

While he has won the Great Race - back in 2011 alongside Garth Tander - this year he suits up for HHA Racing in his very own Holden Commodore V8 Supercar, which he drove to a podium finish at the last sprint round in Sydney.

This time around the 26-year old is the lead driver - and working with international co-driver Oliver Gavin means he is the more experienced of the pair in a V8 Supercar.

"It's a different situation for me - obviously my first time as a main driver and then to have a co-driver with less experience than me again is interesting," Percat told v8supercars.com.au.

However, the young gun feels he is benefitting from the pairing, as Gavin's experience as a racer and lead driver in other categories means there is plenty to learn from the 41-year old.

"In this kind of situation, Olly has got more experience than me as being a lead driver - he's been in that position at Le Mans, in that position in a Corvette. So for me, we got to the end of the race (at Sandown) and I said to him, 'sorry, you know there's a few things I could've handled better' and he goes, 'mate, I know exactly what you're gong through, I've been in your shoes' and he gave me some advice.

"So it was good that I had someone I could lean on straight after the race to tidy up a few things I wanted to improve.

"He knew what I was going through and you could see when he spoke straight after the race ... 'don't put too much pressure on yourself'.

"It's interesting because in these cars he's inexperienced but he has a lot of experience of the position I'm in."

The Wilson Security Sandown 500 was challenging for the duo, finishing 22nd after contact with Will Davison. Davison was not penalised, but Percat blamed him for ending their race.

"He was two laps down, I was pitting and he put me in the fence when I was trying to pit. So he wasn't paying attention," Percat told v8supercars.com.au.

Despite dropping a spot in the Championship standings after earning small points in the first enduro, Percat took away some positives, bearing in mind the big race is yet to come - and Gavin showed he wasn't going to be pushed around.

"I told him after the Saturday (co-drivers qualifying) race - when we were on the grid on Sunday, I said, 'I don't care if you scratch the car, we're not going to get pushed around here' and he gave it back as good as he got it.

"Saturday (he) was hard done by a few times, and he was pretty annoyed with it, Sunday he just got back what happened on Saturday really, so it was good.

"I think everyone in the field knows he's not going to just pull out of the way and let them go and he's ... going to race them. He's a professional race car driver and that's what he is here to do."

Percat was pleased with his co-driver's speed, and given Gavin has experience at Mount Panorama, believes they can bounce back at the Supercheap Auto Bathurst 1000.

"I think the big thing for our group on my car was making sure Olly was comfortable, up to speed, feedback was good, everything his side was probably working well because we needed to make sure he was comfortable before he jetted back off to the states to race his Corvette.

"So from that side of things, I was positive - he was more than quick enough, and he did all the right things in the car, so leading into Bathurst, he's been to Bathurst, that will make life a bit easier for us there."

Whincup to contest 2014 Race of Champions