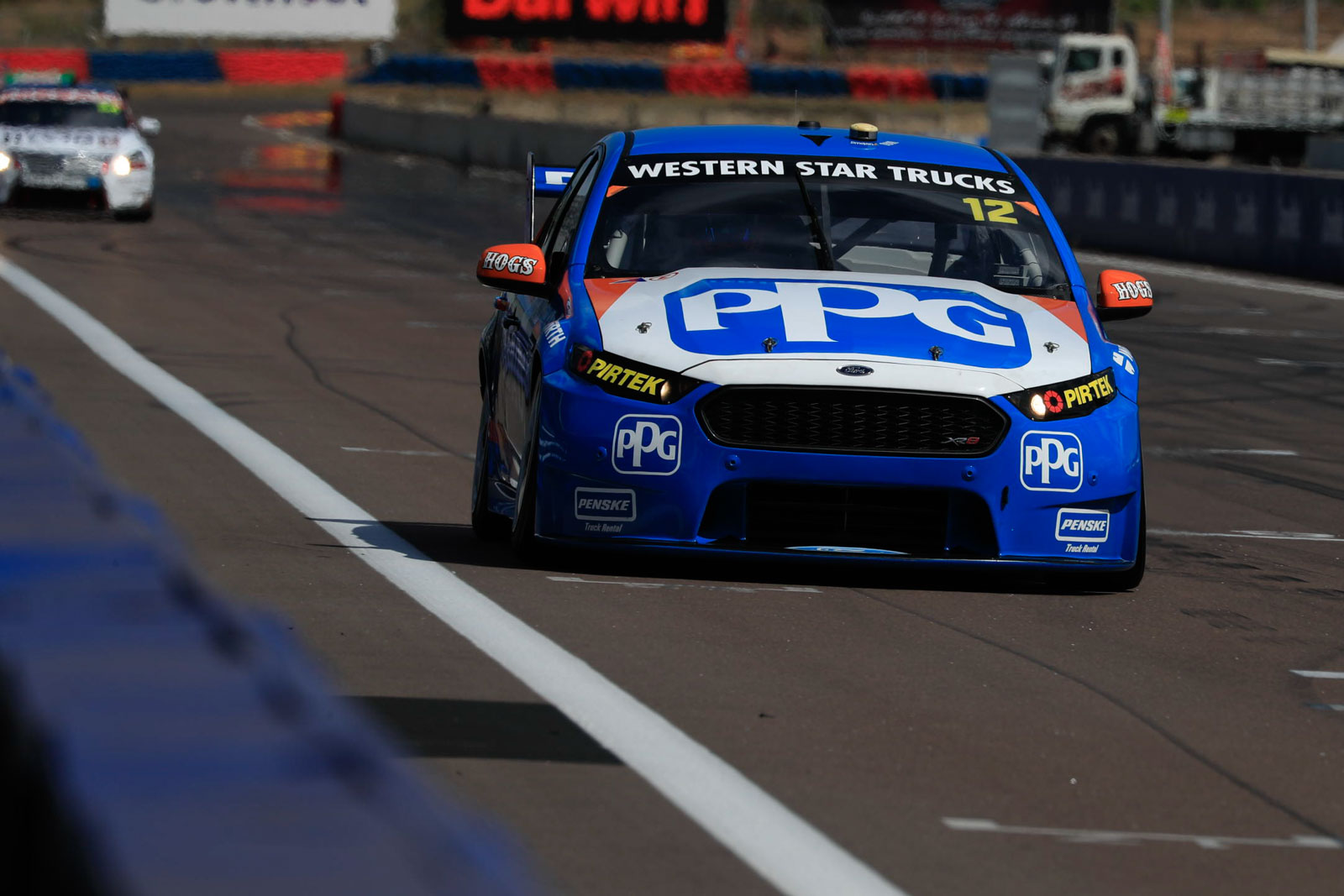 DJR Team Penske Ford will soon install a seat extension tray in its Falcon FG Xs that protects the legs and feet of drivers in a crash and also make the safety innovation available to other Supercars teams.

The trays won’t feature in the team cars at the Castrol Edge Townsville 400, with both Fabian Coulthard and Scott Pye’s Falcons undergoing substantial rebuilds after heavy hits last time out at the CrownBet Darwin Triple Crown.

“We are committed to running it (the tray),” DJRTP managing director Ryan Story told supercars.com. “We will be running it pre-enduros, that’s our immediate timeframe at the moment.

“We are absolutely adamant that is something we need to do and we need to make that design available to other teams as we evolve it because we think safety is pretty important.”

Design of the carbon-fibre tray began after the Supercheap Auto Bathurst 1000 where Pye and fellow Ford driver Chaz Mostert were injured in massive crashes.

The protection system was developed based on the tray used in NASCAR, where Penske also races, by a design engineer on secondment to Australia from the USA.

It will come into use only weeks after Lee Holdsworth’s horrendous Darwin crash in which he fractured his pelvis, his right knee and two ribs. However, DJRTP believes the tray would not have prevented those injuries.

The tray works with all seats approved for Supercars racing including the Erebus E-Cell and is designed to contain the drivers leg in an impact.

The tray required modification for use in Australia because seats used in Supercars are a totally different design to NASCAR and the local category adds the complexity of the Pirtek Enduro Cup, which means drivers of different sizes sharing the car and having to swap in and out quickly at pit stops.

The tray comes up on the left-hand side to approximately the same height as the seat, and the same on the right-hand side.

The design has been subject to scrutiny and had changes recommend by the chassis Technical Advisory Panel (TAP), which comprises technical directors of the constructor teams, including DJRTP’s Nick Hughes.

“It got a really good response and there had been some feedback and suggestions that came back from other teams,” Story said.

The tray has been developed with the co-operation and support of Supercars, including sporting and technical director David Stuart and category medico Dr Carl Le. Story said DJRTP would fully co-operate if the tray became a homologated item for all cars.

Story said there was more to be learned from NASCAR’s safety work that could be applied to the Supercars category.

“We just want to try and ensure that when these things crash – and it’s a case of when not if – that the guys can walk away from it.”

Coulthard’s Taubmans Falcon had its front-end shortened after a three-way tangle with Volvo’s James Moffat and fellow Ford driver Chaz Mostert on the opening lap of the 200km Race 13 of the Virgin Australia Supercars Championship at Hidden Valley.

Pye’s Shell Helix Falcon was also roughed up after a safety car restart in the same race, pulling to a halt on the inside of the straight.

“It was a tough way to finish up a race weekend with two bent and broken cars and not a result to be found,” Story said.

“Scott Pye’s car is pretty good, it has broken some suspension components but is fundamentally ready to go. Fabian Coulthard’s car was stripped back and quite extensive damage was found at the front.

“But we have been fortunate insofar as being only bolt-on pieces. The chassis is in pretty good nick, so we seemed to have got out of okay.”

“Whenever we used to have any front impact of any force we used to lose the radiator and the oil cooler, destroy the carbon airbox, the radiator intake and bend the rail extensions, because this big steel (OEM) bar would push back into it and wreck everything. You could even do damage to the front of the engine.

“With the FG X we have got to a fabricated piece that basically holds the front bar and it … seems to be helping with these impacts.”

A Little goes a long way