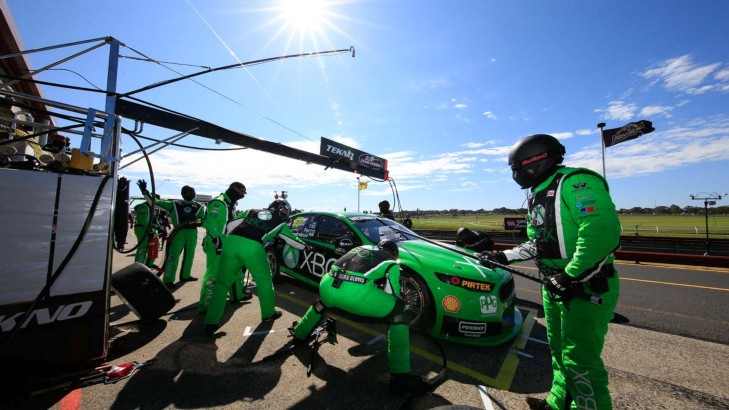 DJR Team Penske will move quickly after the Supercheap Auto Bathurst 1000 to finalise its 2016 plans and announce an expected deal with Fabian Coulthard, the future of Marcos Ambrose and whether it will run one or two cars in the V8 Supercars Championship.

The Coulthard-to-Penske chatter hit high gear yesterday when the Kiwi star confirmed he was leaving Brad Jones Racing at the end of the season, although he didn't specify where he was headed.

And the linkage has been reinforced by the news Coulthard's race engineer Phil Keed, one of the most highly regarded in the industry, would be joining DJR Team Penske from BJR in 2016.

DJR Team Penske managing director Ryan Story confirmed to v8supercars.com.au the signing of Keed, discussions with Coulthard and that the team was more likely to field a single Ford Falcon FG X again in 2016 than expand to two cars. He also rejected outright reports that Steve Hallam would move from Tekno Autosports to manage the operation and head a staff "clearing of the decks" for next season.

Importantly, Story said Ambrose, who stepped out of the team's Falcon after two races this year but has a valid contract to race on into 2016 if he wants to, will communicate his plans for the future to the team immediately after Bathurst. The two-time champ's decision to race or retire will play a big role in shaping the team's 2016 plans.

Those plans will be sorted without team owner and motor racing icon Roger Penske in attendance, as he will now miss Bathurst and instead take in his next V8 Supercars race in New Zealand at the ITM 500 Auckland at Pukekohe.

However, Penske Racing president Tim Cindric will be at Bathurst and stay for some days afterwards as the 2016 program details are finalised.

"Once we have some clarity on where it all (2016 plans) sits we would want to be public with it for sure and that's certainly been the case with the way the Penske guys have gone about it from day one," Story said.

"If we do come to some arrangements I would assume there is no reason why we wouldn't relay that publicly to our partners and to our broader fan base in a pretty short turnaround."

On discussion with Coulthard, Story said:

"We have talked to him for sure, but we haven't made any offers, we haven't got anything locked down yet, but we hoped to have everything sorted out within the next few weeks.

"So talking to Fabian and other drivers on the market, but for us our priority is really about putting together the best team that we can and that goes for personnel through to driver."

On the prospect of two cars for 2016, Story said the pre-condition was them both being fully competitive with an equal shot at the championship. That means no pay or designated number one or two drivers. That made an expansion more difficult.

"We are committed to absolutely going one car next year and in the week immediately following Bathurst we will have some clarity on that, but realistically speaking I think it is going to be tricky with where we are to be able to expand. But it won't be a decision that will be taken lightly."

If that scenario pans out and Coulthard signs to drive the team's one car entered in the 2016 championship, Ambrose's future would be limited to co-driving in the enduros or retirement.

"That decision will ultimately be his (Ambrose's), but as it stands we have a contract with him to go on," said Story. "We are just waiting to have some clarity where his head space is at and where he wants to go next.

"It's a pretty good relationship that we have got all-round and there's no whopping pressure on him to make a decision. It's very much a good relationship we have with him. As difficult as it has been with him stepping out of the car, he has still remained a pretty instrumental fixture in the team landscape.