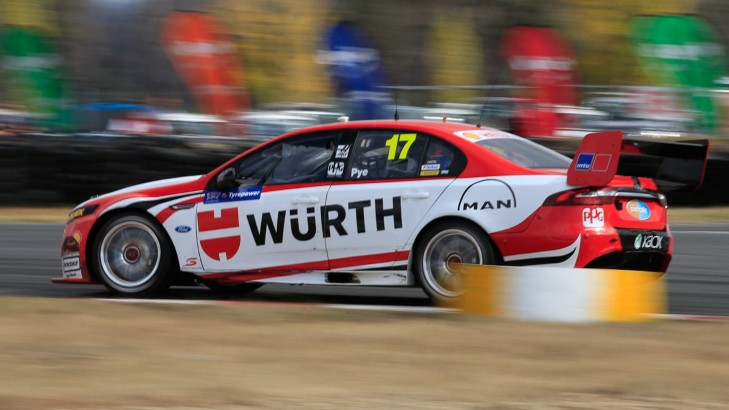 DJR Team Penske is working to align the technical specification of its Falcon FG Xs more closely with Prodrive Racing Australia's Fords as its seeks solutions to the puzzling lack of pace that prompted Marcos Ambrose's shock decision to step away indefinitely from the cockpit of #17.

The silver lining out of that for the team and Ambrose was the focus could go solely on the car being the source of the pace issues.

Now, the long break from Tasmania to the Perth Supersprint on May 1 gives the team the chance to literally disassemble the FG X raced by Pye in Tasmania and go over it in fine detail looking for issues.

Last Friday the team also confirmed Pye would stay in the car for Barbagallo and that primary sponsorship for that event would come from Penske-affiliated company MTU.

Aligning the DJR Team Penske Falcons more closely on technical specification with PRA makes sense as it had all four of its new-gen FG Xs in the top 10 in Tasmania, while Pye battled at the back of the top 20.

The two teams have a long-standing technical and date sharing relationship.

"There's a methodical process ongoing trying to eliminate variables between the Prodrive cars and ours and we are fortunate enough that our relationship with them is such they are being very open and transparent," DJR Team Penske managing director Dr Ryan Story told v8supercars.com.au.

"So going through that process and eliminating some of those variables where we are running a Dick Johnson Racing or DJR Team Penske part in lieu of a Prodrive part and fitting the Prodrive part is one of the most logical steps.

"It's pretty clear and has been speculated that we should be able to just bolt in a Prodrive part and step forward, but what we have found with our car this year is we haven't been able to do that

"So there is something fundamental there that we need to address and resolve and going through this process in a methodical fashion is the best way to bring us forward."

The fundamental issue is identical for both DJR Team Penske FG X chassis that have been used this year - mid-corner understeer on the hard tyre that leads to premature degradation of the Dunlop control rubber.

"We are pretty firmly of the view it's something we are bolting on to the chassis," confirmed Story. "We should be able to make some progress ... and see the car that goes to Perth with any changes that we have made to it."

One potential avenue the team seems destined to explore is the Supashock damper PRA has been developing on its car for more than 12 months.

It's something we want to have an opportunity to evaluate," said Story. "We would be foolish not to."

DJR Team Penske is yet to make a call on whether it will sacrifice its sole remaining test day before Barbagallo to validate any changes, although given Pye's presence in the car in WA means testing will be a priority that could prove unlikely.

Nor has a call been made on when Ambrose next races the car. At the latest, he is expected to return for the co-driver Pirtek Enduro Cup. But Story has confirmed his presence in WA to aid Pye's development of the car.

"There is a good camaraderie and a good bond between those two already and having Marcos at the track in Perth will allow that relationship to continue to grow, but also help the engineers understand the car better because Marcos can obviously lean on his experience to help Scott illuminate the situation."

Story said he expected the timeline for Ambrose's return to the cockpit should become clearer after Barbagallo.

"The objective of his sitting out of the car remains that we need to get on top of the issues we have and I think when we do that and we are confident and comfortable we have made some progress - whether that's after Perth or beyond - then then we might see change.

"But it is not something we have spoken about at any great length. I think you will see some clarity on that after Perth."

Scott Pye  ›
15' DJR Team Penske ›
Stay In The Know
Sign up to the Virgin Australia Supercars Championship Newsletter
This website uses cookies to improve your user experience. By continuing, you will be providing your consent to our use of cookies.Ok