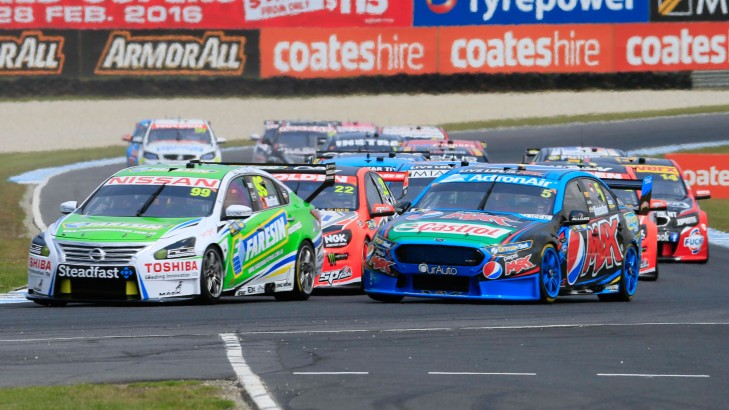 Prodrive boss Tim Edwards has revealed the team has submitted incidents to be reviewed by Driving Standards Observer Jason Bargwanna after Championship leader Mark Winterbottom was monstered in the pack at Phillip Island.

Edwards also had strong words for rival driver Shane van Gisbergen after he punted title contender David Reynolds in an incident in race one, and was gobsmacked the TEKNO pilot was not immediately hit with a drive-through penalty after the contact that spun the Bottle-O Falcon off-track.

"There were a couple of incidents, but I'm not going to comment on the specifics of it because we've asked for them to be investigated," Edwards told v8supercars.com.au.

"We haven't seen any footage so we've got to be guided on what Frosty told us happened during the race - but he was pretty p***ed off when he got out of the car.

"The reality is - it's almost inevitable, isn't it - people are dive-bombing, driving overly aggressively because they've got nothing to lose and he's got a huge amount to lose.

"So it's a different mindset out there, but there's still a respectful way to overtake someone and they've shown him the grass."

Winterbottom finished seventh and fourth in the two races, his lead whittled down to 209 points with race one winner Craig Lowndes now in second in the Championship.

Prodrive stablemate Reynolds, who is also in contention, was tapped off the road by van Gisbergen and ultimately finished last.

The incident is being investigated this evening, and while van Gisbergen believed Reynolds had to answer for contact with him at turn one, Edwards suggested the TEKNO driver was driving "like a complete tool".

"Like most of the Australian population, I'm a little dumbfounded nothing happened during the race, but to be honest nothing surprises me anymore," Edwards said.

"Even if something did happen there [at turn one earlier] - we don't play tit for tat.

"That incident - if he thinks there's something in there, should be reviewed in isolation. You don't just go, oh, he ran me off there so I'm going to drive like a complete tool and take him out.