Only those who were withdrawn last night - Will Davison (Tekno), James Courtney (Mobil 1 HSV), Rick Kelly (Nissan) and Taz Douglas (Lucas Dumbrell) - will be non-starters for Race 4.

The BJR, GRM and Mobil 1 HSV crews trickled out of a chilly Symmons Plains circuit in the early hours of the morning after working to repair damage from yesterday’s 12-car pile-up.

BJR resurrected all three of its cars amid a nightmare run for the team that saw Nick Percat’s entry rebuilt following Albert Park and two of its Super2 cars heavily damaged yesterday.

“The guys have done an amazing job to turn these cars around from how they looked yesterday,” Brad Jones told Supercars.com.

“Apart from a bit of duct tape and the odd scar they look like they haven’t been in an accident at all.

“The boys finished at about 2:30am last night and were then back up early this morning.

“There was a massive amount of damage, including some structural stuff on the #14 (Tim Slade) and #21 (Tim Blanchard).

Jones however confirmed that its Super2 entries of Macauley Jones and Jack Smith have both been withdrawn following their crash at the same part of the circuit.

“Macauley’s car may never race again and Jack’s isn’t too far away either, but we’ll do a full assessment when we get back and try to get both going,” he said.

“It’s been a nightmare for us. I think we’ve done more damage in two race meetings than we have in the last couple of years.”

GRM also successfully fixed its full fleet of main series entries, with both Garth Tander and James Moffat set to return to the track for qualifying this morning. 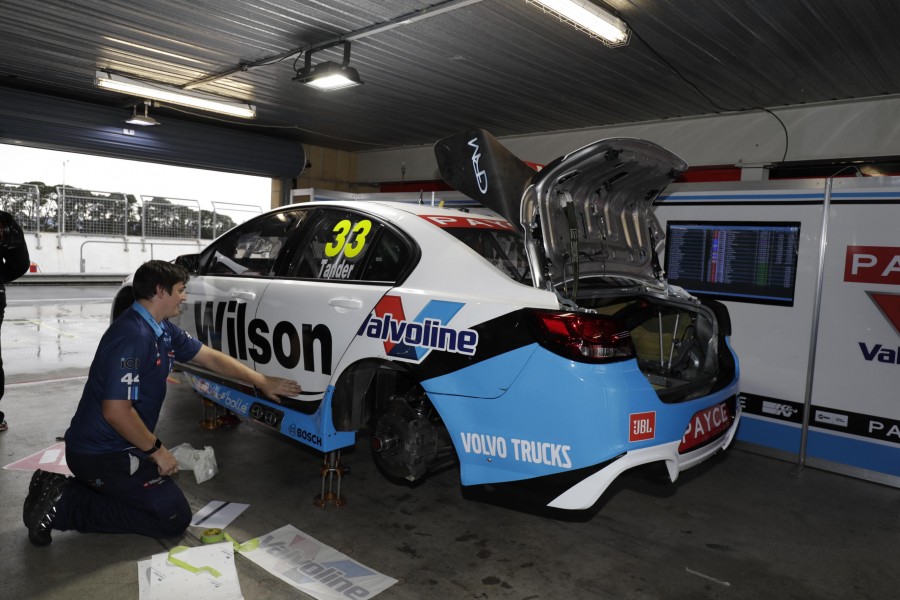 “We made some pretty good progress last night and got them to a stage where they just needed a tidy up this morning,” team manager Stefan Millard told Supercars.com.

“We got out of the track at about 1:00am and had some sleep before getting back into it.

“We had a fair bit to do on some bar work on Garth’s car, but we’re happy that structurally it’s ok.

“Most of the damage was just bolt-on parts, which was the same as Moff’s car, which took a front-on hit similar to what it had at Albert Park.”

Although Courtney’s car was immediately withdrawn, Mobil 1 HSV Racing crew were the last to leave the circuit after rebuilding Scott Pye’s Commodore.

Team boss Adrian Burgess told Supercars.com that the last of his crew headed back to their hotel at 5:00am.

“There was a lot of work to do, we changed pretty much everything apart from the roof, the windscreen and the chassis,” Burgess told Supercars.com.

“It took hits on all four corners, so all the suspension has been replaced, as well as the engine, and full driveline, panels, steering rack, everything. It’s pretty much a new car.

“We had to replace one of the bars on the front-right wheel tub where the wheel came back which was fairly significant.

“There is a little bit still to do this morning but we pressed on to have it finished last night so we could get some sleep knowing we had ticked off the major items.”

Qualifying for Race 4 of the Virgin Australia Supercars Championship will get underway at 11:30am.