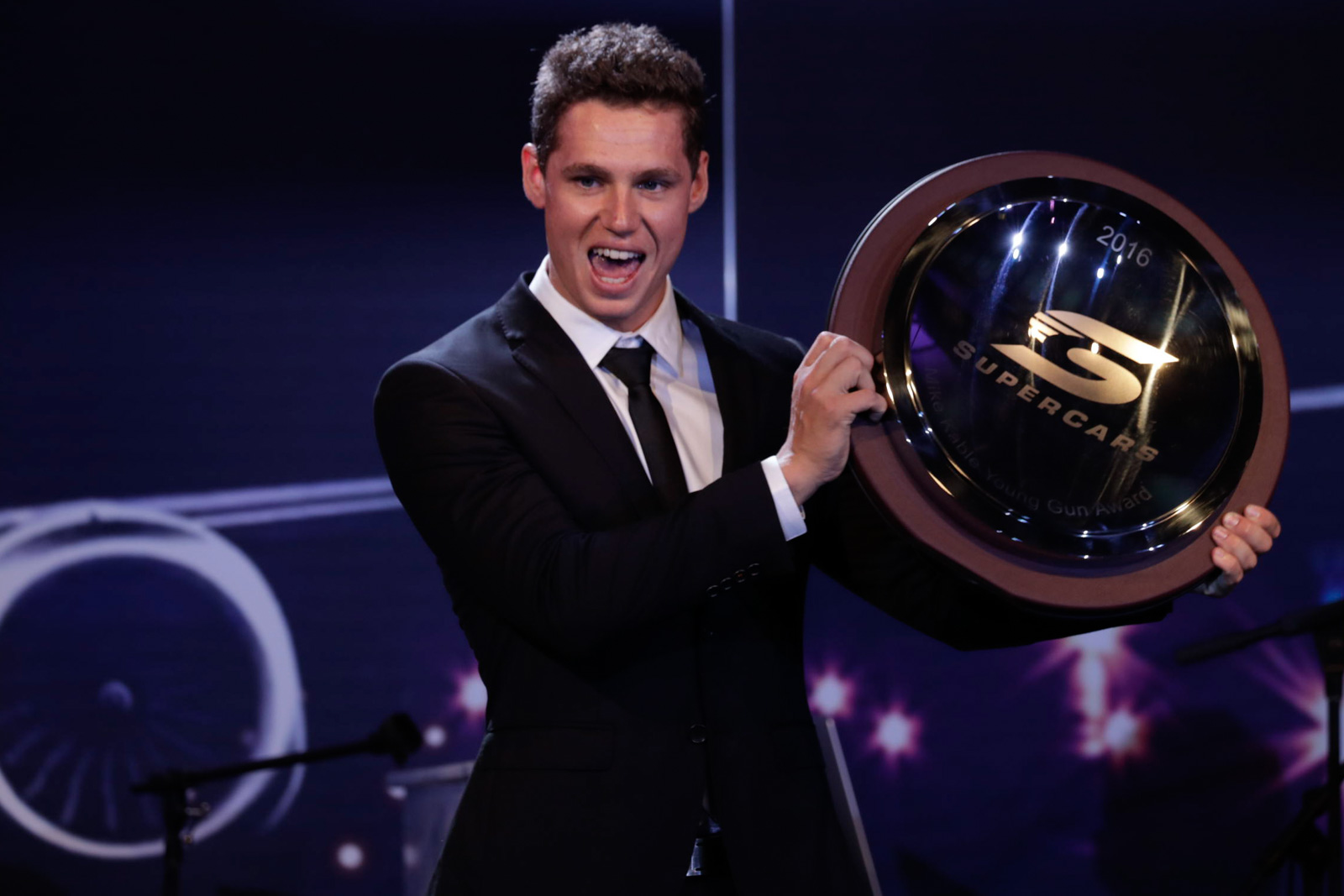 After finishing fourth at Bathurst and the rain-drenched Clipsal 500 Adelaide, as well as earning pole position in Perth, Cameron Waters has proved a worthy recipient of this year’s Mike Kable Young Gun Award.

But the 22-year old hasn’t hung up his helmet yet for the season, set to hit the circuit in his Supercar on Wednesday December 14th for his final rookie day of the year.

After ending the year on a sour note at the Coates Hire Sydney 500, crashing at turn eight and then having Fabian Coulthard run into the Monster Energy Falcon on Sunday, receiving the Mike Kable Young Gun Award at the Supercars Gala the following night helped ease the pain.

“I was absolutely honoured to have won that award and join a big list of champs and pretty good drivers, so absolutely awesome to win that award – a good finish to the year for me,” Waters told supercars.com.

“The year overall was ok for me, but a lot of learning. I learnt a lot about myself and how to go about a race weekend, and what I think I need to improve.

“There were a few good results – I was on pole and a couple of fourths – a couple of bad ones, but that’s all part of the learning. I'm really keen to build on that for next year.”

The Ford Falcon FG Xs just haven’t had the pace of Triple Eight, particularly in the second half of the year, though 2015 champ Mark Winterbottom did nab a win in New Zealand last month.

Prodrive won’t miss an opportunity to get out on track and evaluate further, so Waters will be out at Winton on Wednesday for a final run for 2016, before the team tests on the new tyre constructions for 2017 at the pre-season test.

“It’s awesome to get another rookie day, it’s really needed for the rookies and does help me a lot,” Waters said.

“We’ll go there try a few things and cut a few more laps – hopefully we can learn a couple more new things for next year as well.

“We know what we need to work on, we’ll focus on gains and the rest.

“The tyre mixing it up next year will be another part of it.

“I’m really excited to go there and just cut some laps, really.”

Waters has been housed in with Winterbottom this season, the team splitting last year’s pair Winterbottom and Chaz Mostert because of commercial reasons. Team boss Tim Edwards said that was something that wouldn’t change in 2017, with the Waters-Winterbottom pairing to continue on.

Their results meant finishing fourth in the teams’ championship, which knocks them down a few garages in next year’s pit lane order, behind Triple Eight – Red Bull and the Vortex/Tekno garage – Walkinshaw Racing and Garry Rogers Motorsport.

For Waters, exposure to both Bathurst winning drivers has been a benefit for him as he fine-tunes things on and off-track.

“Working with Frosty and Chaz has been really good, how they go about it. There are a few things they’ve taught me through the year that have been really good – how to approach a race weekend and things to focus on through a weekend as well.

“It’s been good, it has been an experience and massive learning for me.

“Now I’m just really excited to get into next year and build on it, really.”