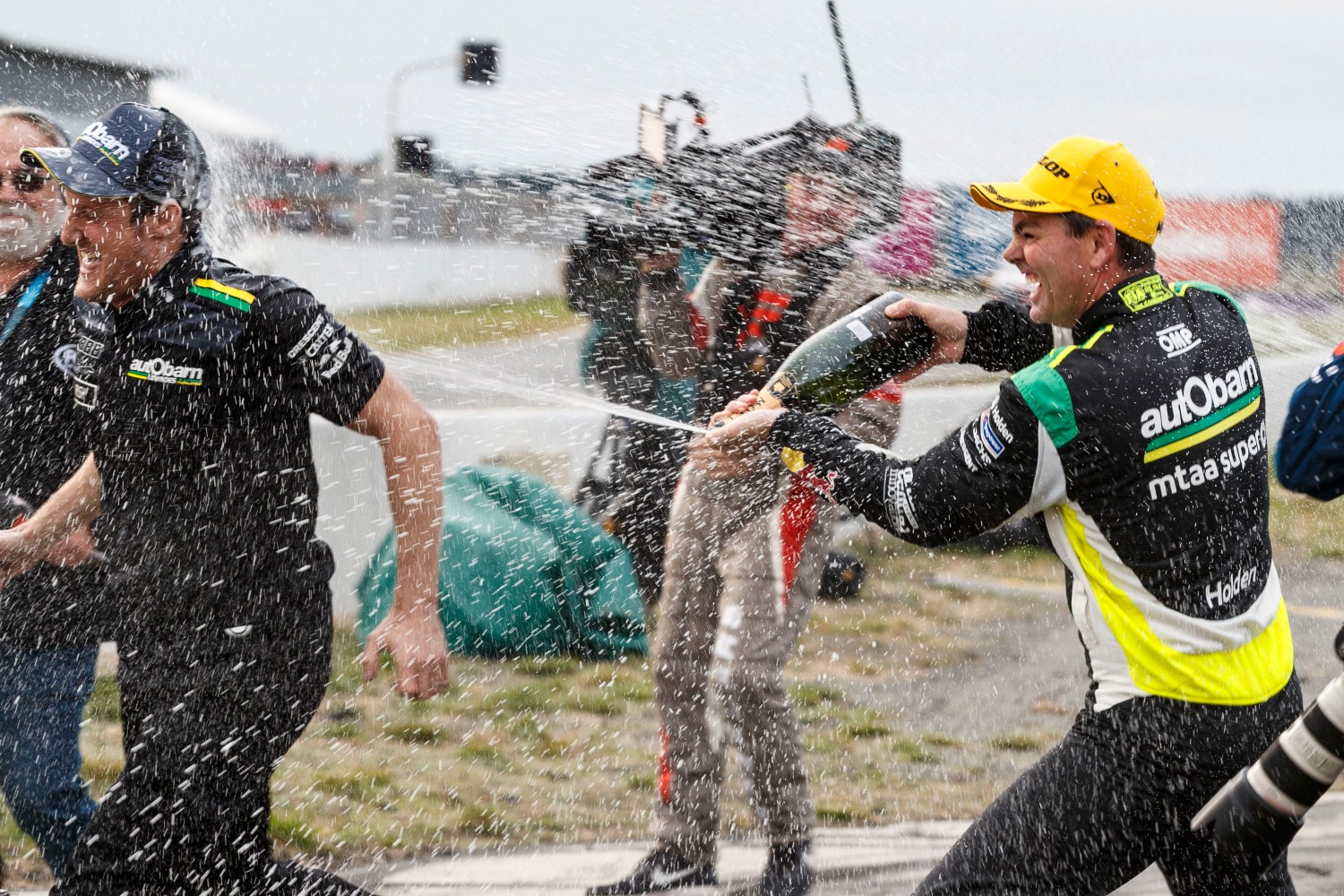 The 2018 season was memorable for Craig Lowndes, with the three-time series champion drawing the curtains on his full-time career at season’s end.

Amid the questions surrounding his future, Lowndes had toiled on a winless run stretching back to July 2016 when he arrived at Symmons Plains in April 2018.

After a strong run to the podium on the Saturday, Lowndes went one better to mark April 8 in 2018 as the day he signalled to his rivals that he was far from a spent force.

Earlier in the day, Lowndes fired his #888 Autobarn Commodore to top qualifying, marking his first ARMOR All Pole Position since August 2015.

WATCH: WHEN LOWNDES RETURNED TO THE TOP

It marked a key milestone in the relationship between Lowndes and engineer John McGregor, who had the enviable task of skippering the category’s most popular driver.

Things didn’t work out for Lowndes in 2017, with the veteran finishing a lowly 10th in the standings, his only top three finish also coming at Symmons Plains, albeit in the race marred by the extraordinary pile-up.

The Tasmanian circuit, which will host the next round of the 2021 season next weekend, has been kind to Lowndes; he claimed 10 wins at the 2.4km circuit, just two fewer than Triple Eight teammate Jamie Whincup’s all-time record.

His 10th and final Symmons win was perhaps his most defining; Lowndes won the start and withstood an early challenge from stablemate Shane van Gisbergen.

Lowndes enjoyed a near two-second lead over van Gisbergen when the latter pitted on lap 14.

The #888 entry was pulled into the lane on lap 22, with Whincup nearly three seconds adrift prior to Lowndes’ stop. 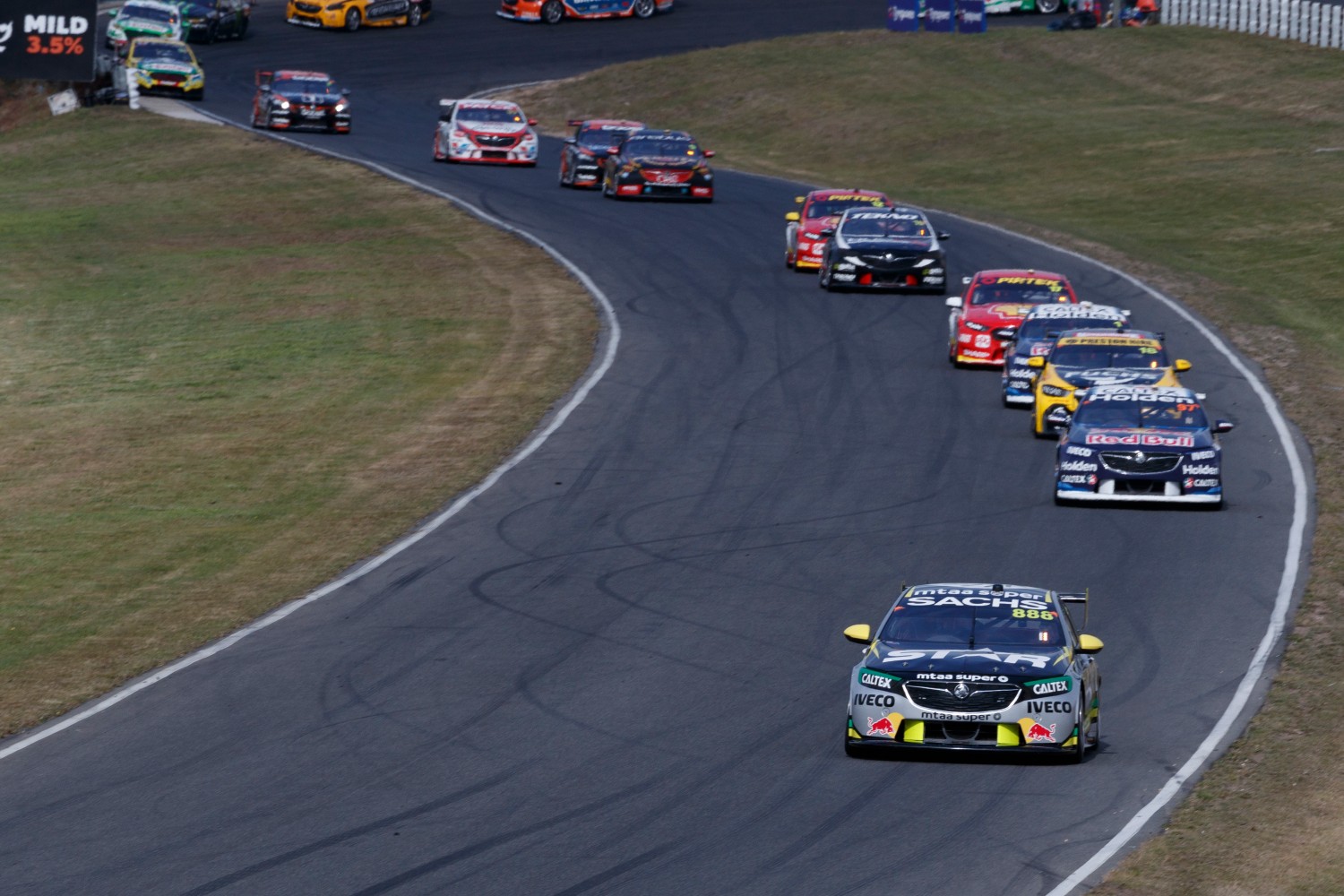 Lowndes stretches his legs in front

Scott McLaughlin emerged as the new effective leader following the stops, with the Shell V-Power Racing Team short-filling the #17 Falcon.

However, Lowndes regained the lead at the Turn 4 hairpin on lap 29, and he set about creating a gap.

The undercut nearly worked for McLaughlin, who split the two Triple Eight Holdens, with the top three covered by just over a second.

The order didn’t change, though, with Lowndes putting in yet another assured stint to end his long wait for an elusive 106th career victory. 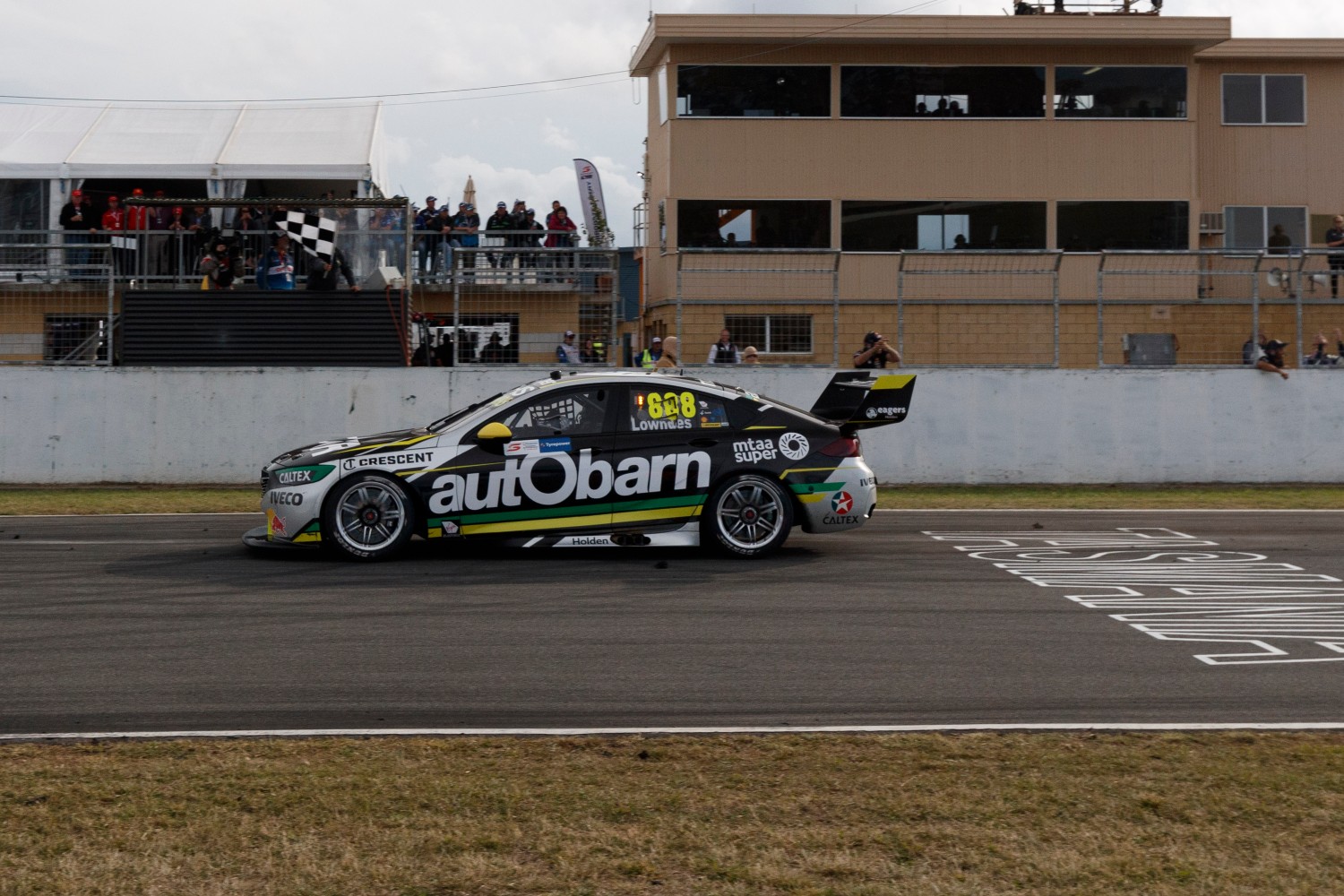 The end margin to McLaughlin was 2.3s, with Whincup assuming the championship lead after throttle problems left van Gisbergen 25th.

For Lowndes, it was an opportunity to silence his detractors, many of whom doubted he would ever win another race.

That he did, Lowndes securing a famous seventh Bathurst 1000 crown alongside Steven Richards later in the year.

His Symmons Plains win, however, ensured that the driver once monikered as ’The Kid’ was more than just a has-been.

“I'm relieved,” he said after the race.

"It's no secret last year was up and down and we’ve wanted to be more consistent.

"I said from the start that this car suits me and hopefully we've proven this weekend. 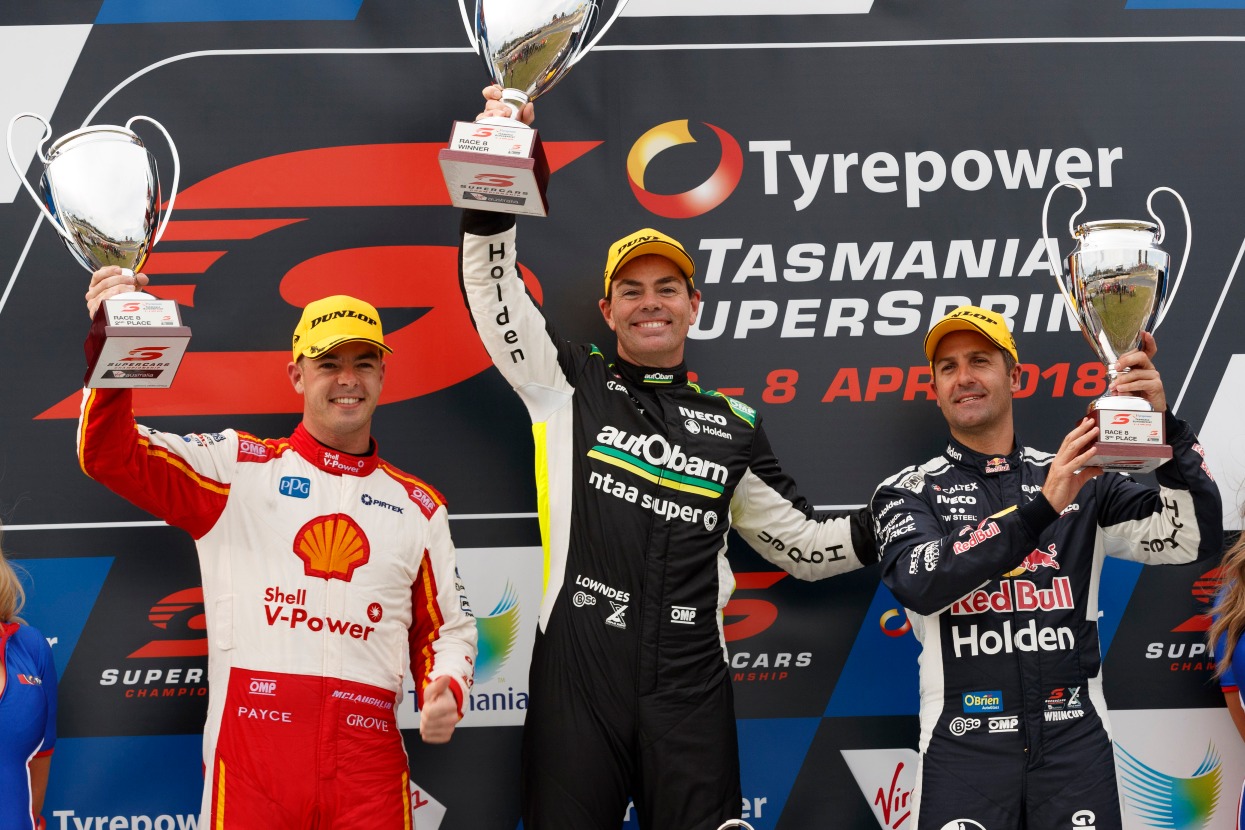 A very happy podium in Tassie

"It’s a first one for Irish [McGregor]. He's copped quite a bit of criticism but I think we’ve shown we can bounce back.

“It's been a long time coming and I can’t thank the team enough.”

With the championship becoming more competitive, the win was proof that you can teach an old dog new tricks.

It was welcome relief for Lowndes, who had endured a sloppy start to the 2018 season.

Across the Adelaide and Melbourne events, Lowndes had recorded results of ninth, seventh, 16th, DNF, sixth and 12th.

The rest, they say is history; Lowndes announced his full-time retirement in Townsville, won the Great Race, joined Whincup for the enduros from 2019 onwards, and began a new life in broadcasting. 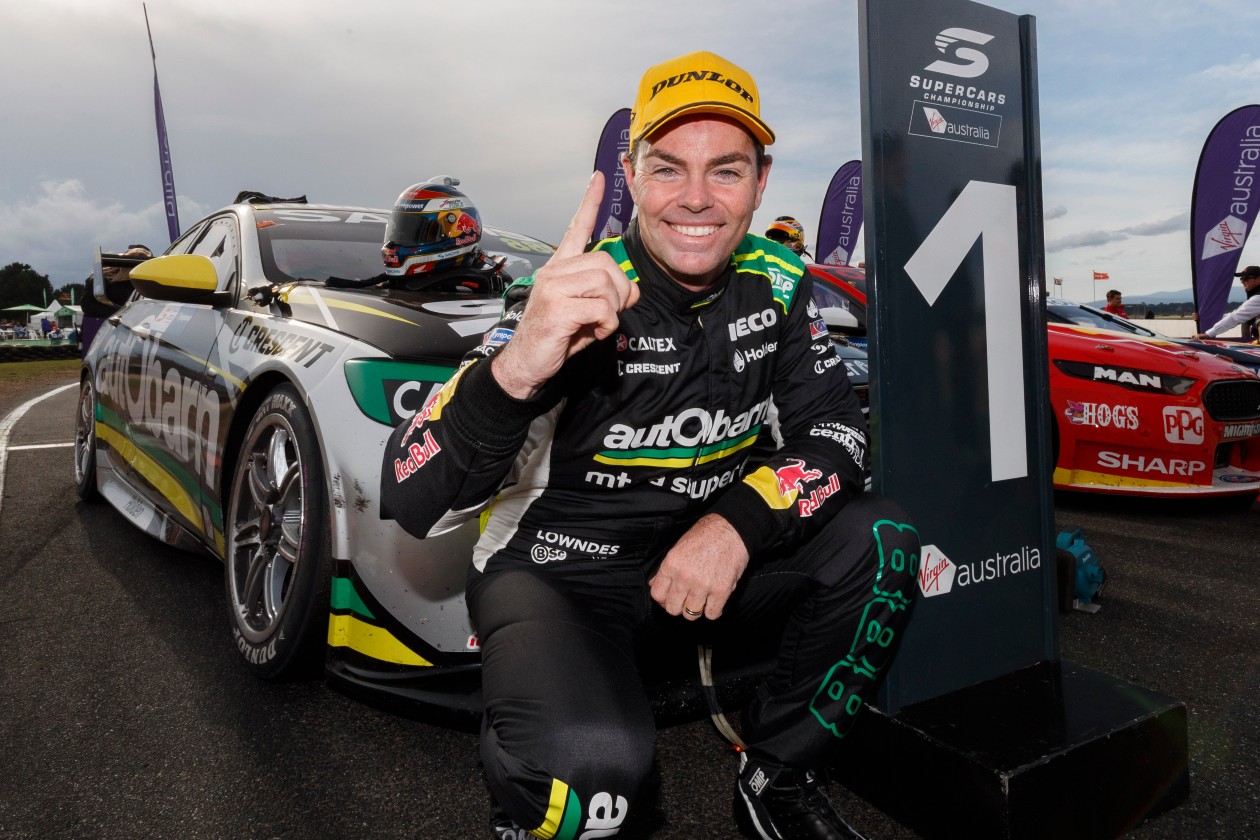 Of his now 110 wins, No. 106 carries more weight than most; through the lows of 2017, Lowndes knew he still had enough to challenge for victory.

It was just a matter of making it happen, and he waited until a happy hunting ground in Tasmania to make a genuine statement.

"As race drivers you always want to drive with confidence and belief but until you win races and do things… it’s always disappointing,” Lowndes said.

"The competition in Supercars right now is probably the toughest I've ever seen.

"25 other cars our there that have got great resources, sponsorship, drivers, equipment, teams, everything else. It's really hard.

"You make a mistake in qualifying for a tenth [of a second] and it's not one spot any more. It's five or six.

"It really is quite a tough category at the moment but that's the beauty of it."

Long compared to Lowndes, McLaughlin was delighted to see the then 43-year-old tame the field. 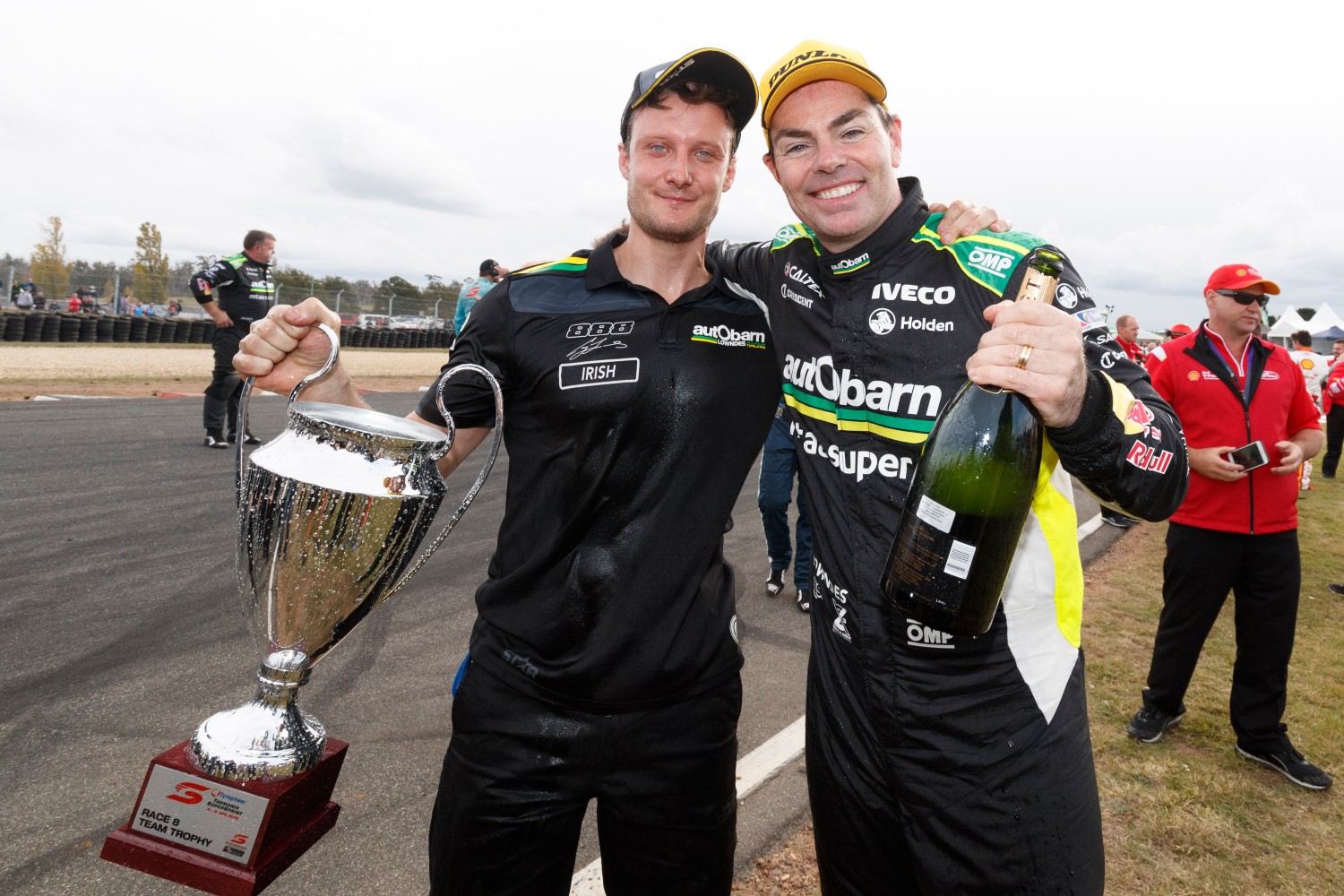 "It’s a first one for Irish... I think we’ve shown we can bounce back"

"We’re trying our hardest to fly the flag for the Ford fans and a podium today is like a win for us.”

Whincup added: "Today was all about Lowndesy, what an effort.

"We tripped over him a little bit in the pits and it got a bit hairy with Scotty through Turn 3 on cold tyres, but we kept it all clean.

"I was miles back [after Adelaide] and now I’m not, but there’s still a lot of water to go under the bridge.

"We’ll keep fighting on and trying to improve the car."