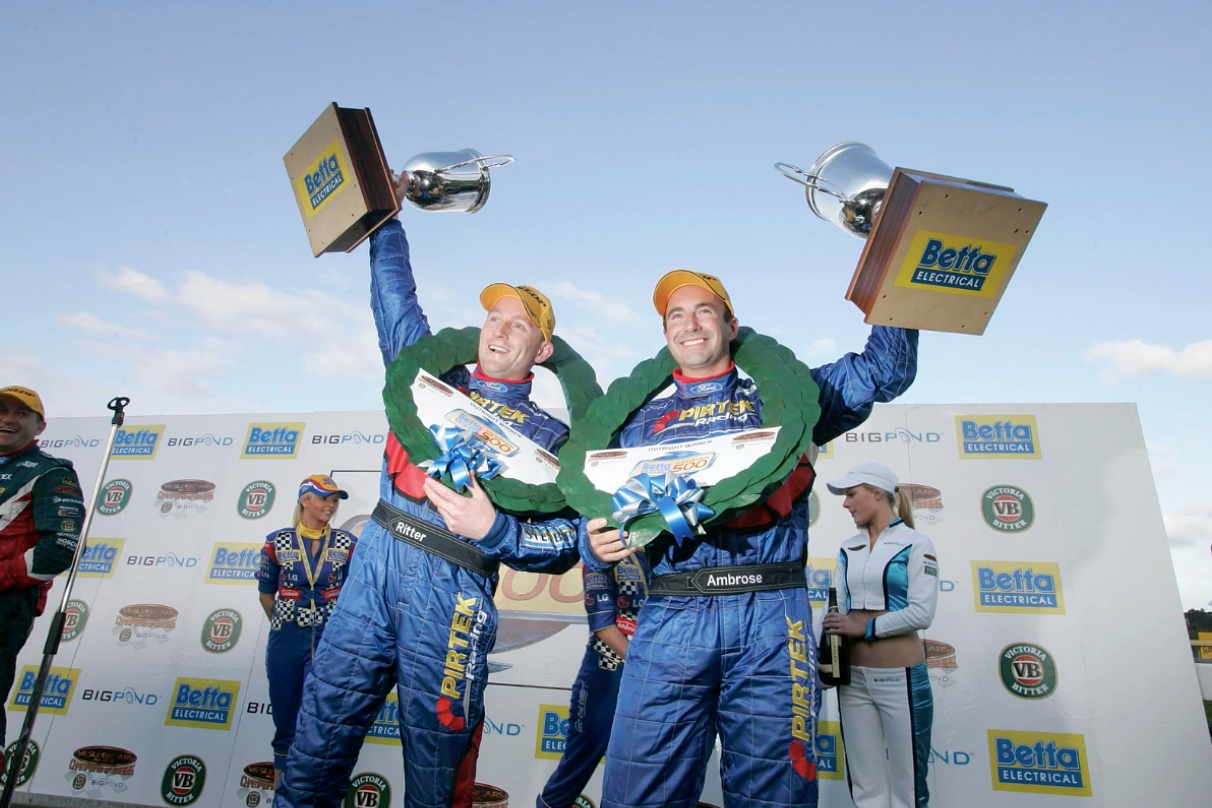 Of his 28 career wins, Marcos Ambrose’s charge to Sandown victory in 2004 was one of his most remarkable.

A force of the early 2000s, Ambrose and Stone Brothers Racing orchestrated a memorable one-two finish at Sandown and in the championship.

On September 12, 2004, Ambrose and Greg Ritter combined to win a thrilling Sandown enduro.

It would be Ambrose’s only enduro win, and the sole win of Ritter’s career. 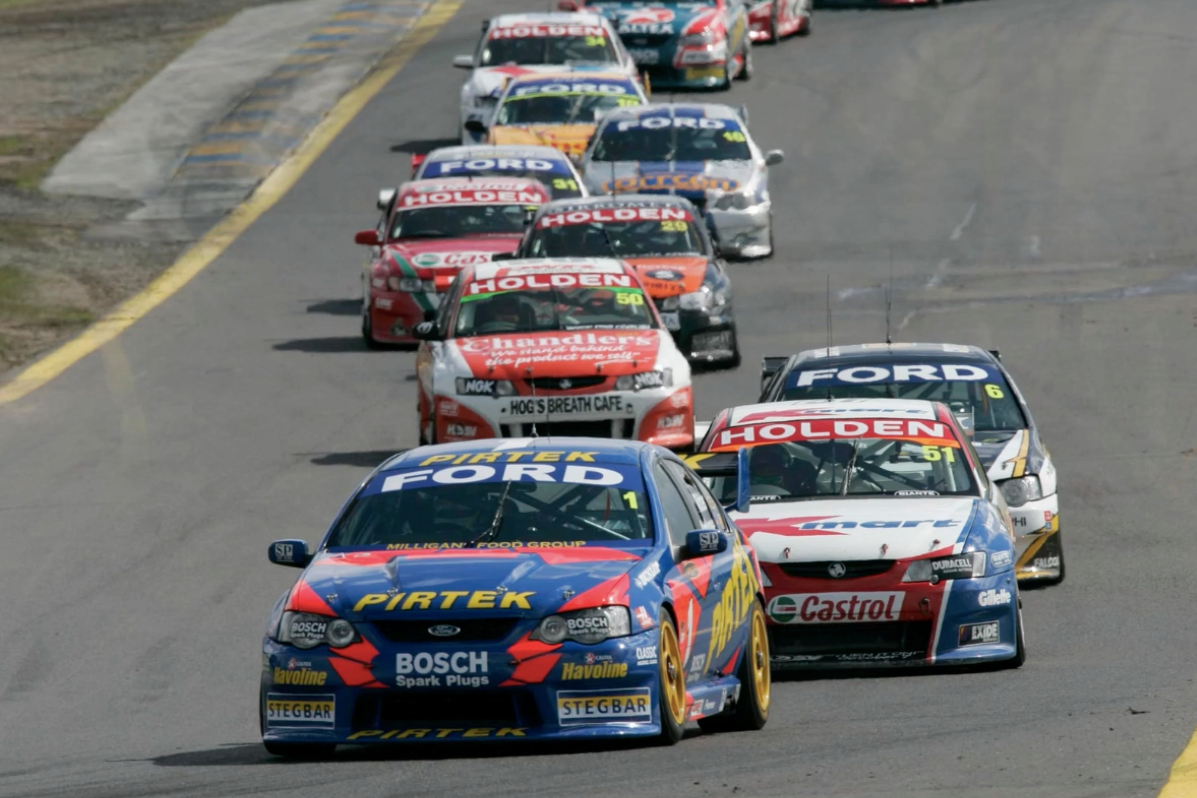 It was a landmark day for Gold Coast plasterer Ritter, whose best career result to Sandown had been fourth in Bathurst in 2001.

Ambrose and Ritter led 130 of the race’s 160 laps - but their dominant performance featured one key hiccup.

The race was littered with Safety Cars, with Melbourne rain rendering the Sandown infields and outfields a boggy mess.

It was simple - if you went off, you were in big trouble.

Rick Kelly claimed pole for the race and shared the front row with Ambrose, who won the previous race at Oran Park. 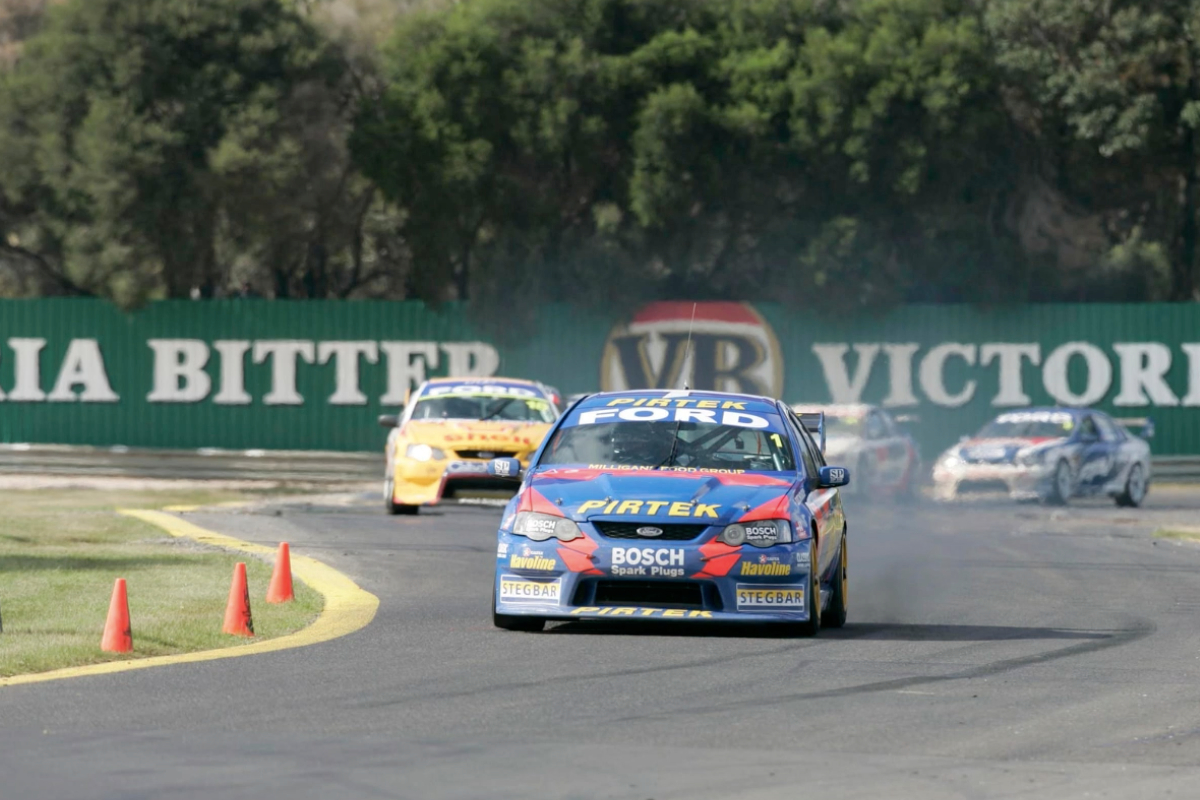 Ambrose lead Kelly through Turn 1, but Steven Johnson and Davis Besnard were first to fall foul of the slippery outfield.

Johnson - who would recover to third with Warren Luff - escaped, but Besnard wasn’t so lucky.

Besnard - who famously won from 29th at Symmons Plains later in the year - was bogged, and the first Safety Car was called.

Ambrose led at the restart, with Kelly and Craig Lowndes - who would win a Sandown thriller 12 months later - keeping a watching brief behind.

The Safety Car was called again after Grant Elliot became beached, before Besnard spun off again at the restart to trigger another full-course yellow. 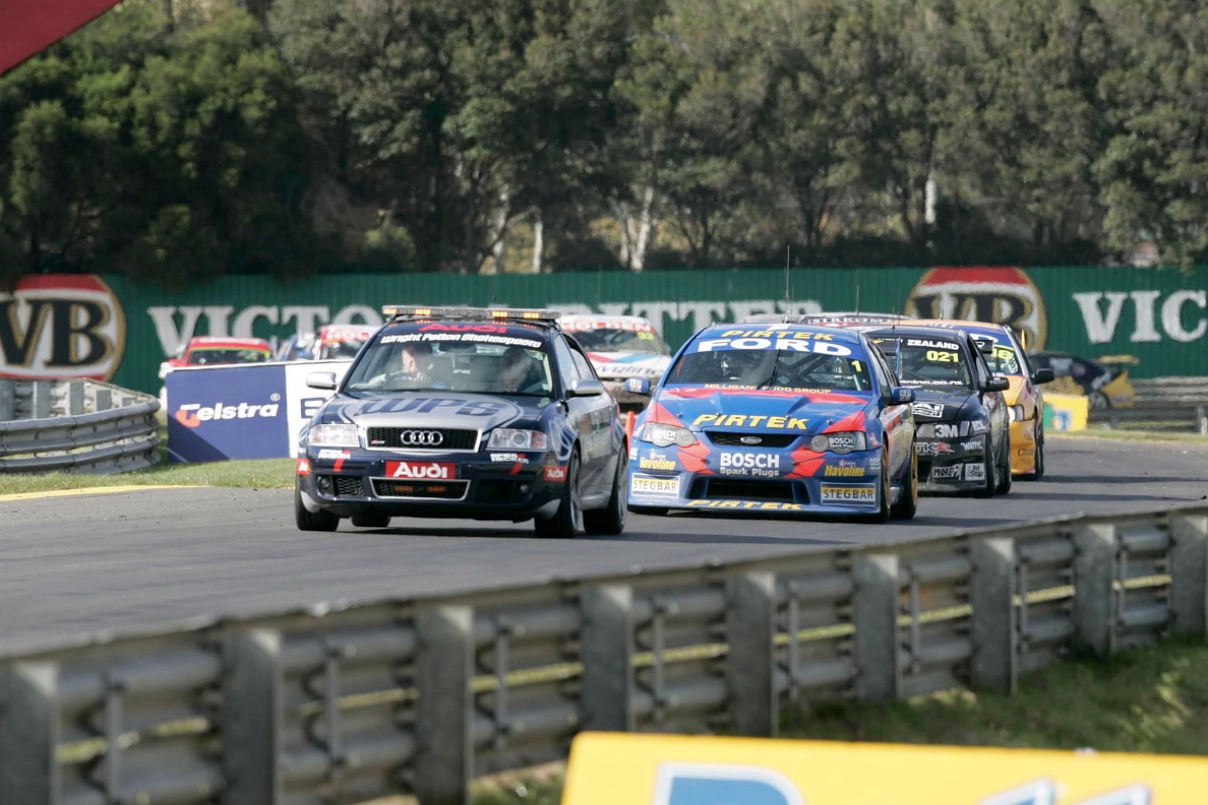 The chinks in Ambrose’s armour showed when he missed a gear on the third restart, allowing Kelly and Lowndes through.

He would recover track position, but a fiery exit for Phillip Scifleet saw the Safety Car deployed for a fourth time.

Ambrose stretched to a four-second lead after the restart, with Lowndes dropping away from Kelly and behind Jason Bright, Jason Bargwanna and Garth Tander.

At quarter-race distance, the driver changes began; Russell Ingall handed over to Cameron McLean, with Ambrose handing over to Ritter.

Ritter stretched his legs in the lead before Glenn Seton, having taken over from Lowndes, was turned into the infield and trigger another Safety Car. 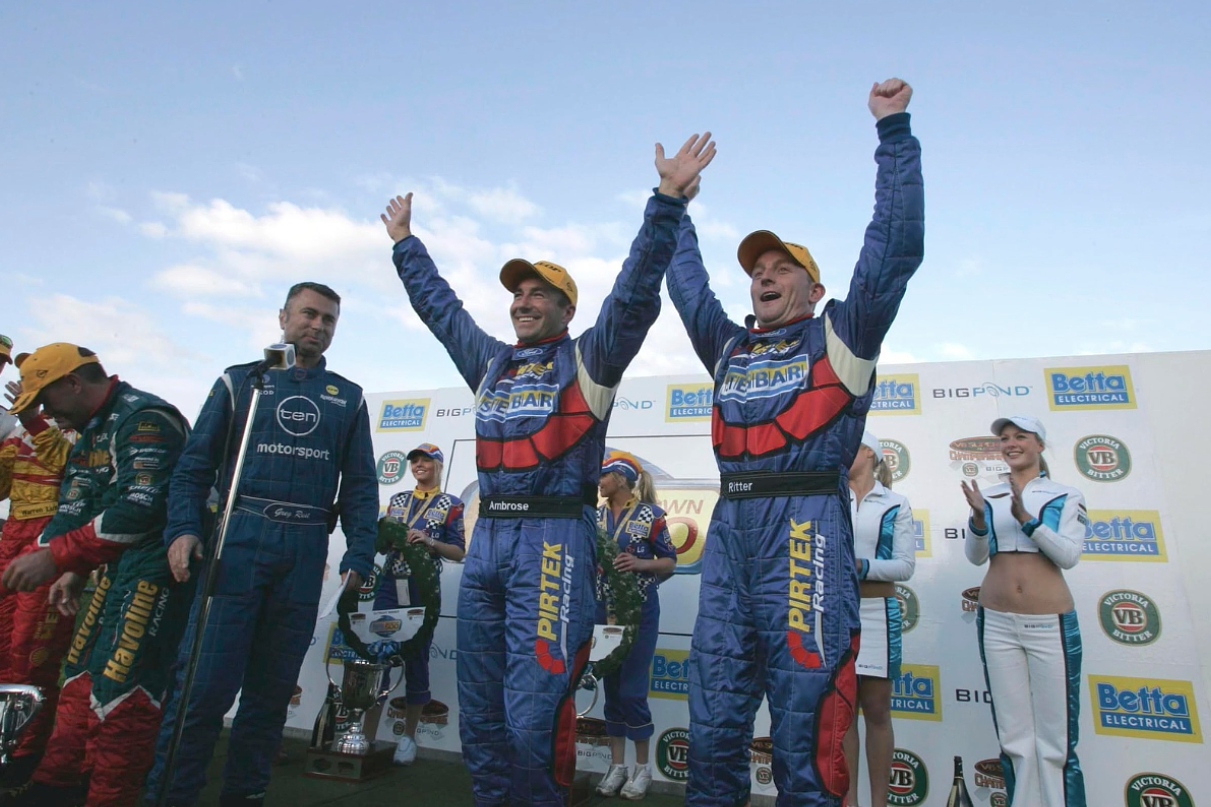 Greg Murphy loomed as Ritter’s challenger, having taken over from Kelly.

Murphy battled through lapped traffic as Ritter dropped in lap times almost on par with Ambrose.

However, the pressure finally showed, Ritter spinning the leading Falcon at Turn 1 on lap 101 and gifting the lead to Murphy.

Ambrose could only watch on as Ritter tried in vain to return to the track - but a spin for Alex Yoong triggered another Safety Car, sparing Ritter’s blushes.

Murphy and Mark Skaife stopped, with the two Commodores swapping positions in the pits. Later contact with Seton saw Skaife pick up damage, and Ingall would emerge as the effective leader. 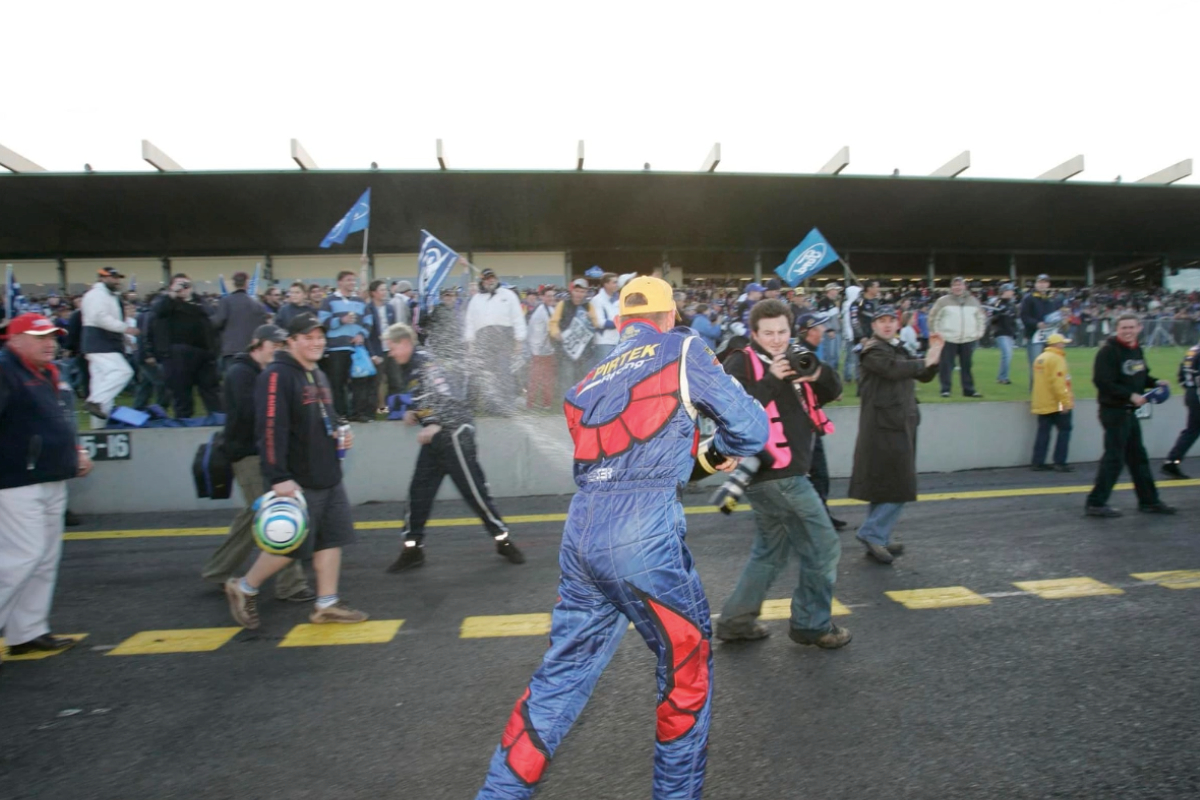 Ambrose was back behind the wheel of the PIRTEK Ford and ranged behind teammate Ingall and Murphy. When Jim Richards made an error and baulked the leaders, Ambrose sailed back into the lead.

There would be a staggering 12 Safety Car interventions, but despite Ritter’s mid-race off, Ambrose was clearly the quickest driver on track and sailed to an 18th career win and sixth of 2004.

Ingall finished second to seal the SBR quinella, with Johnson and Luff making it a Falcon podium lockout.

Only seven cars finished on the lead lap. 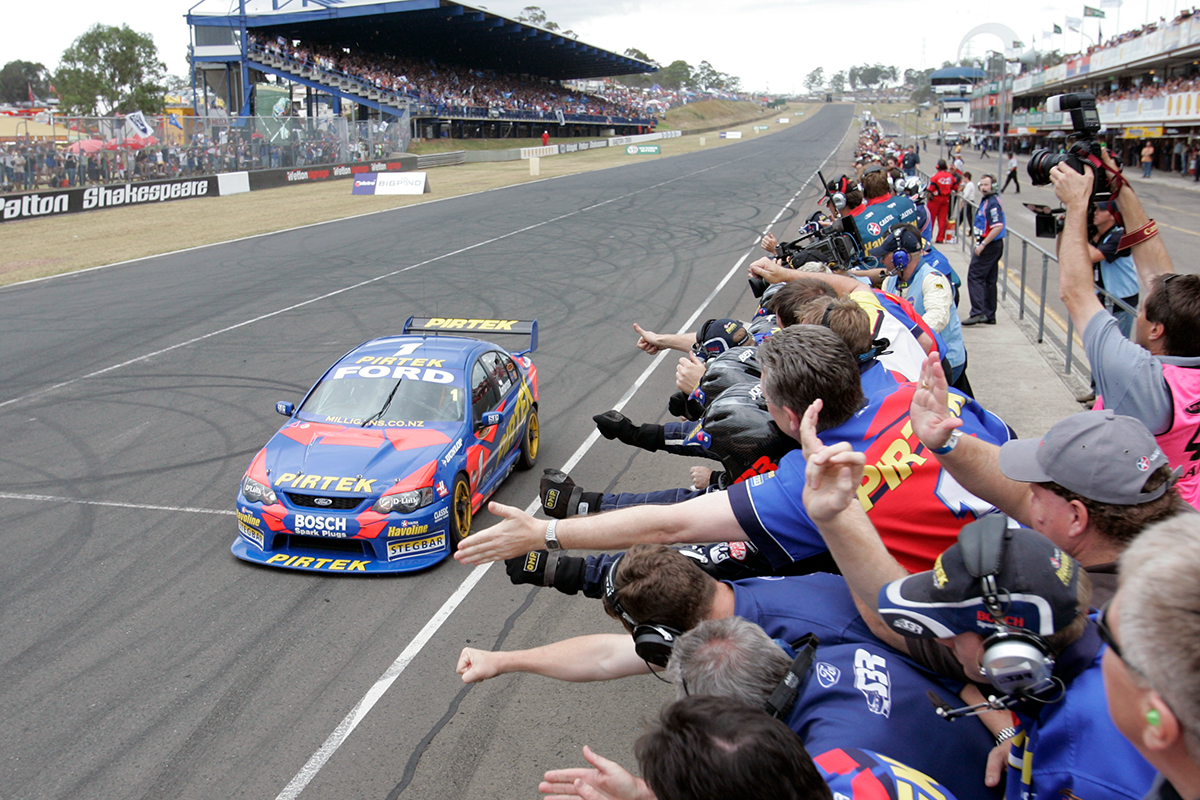 "Who would have thought the race would have unfolded like that today? These enduro rounds throw up so many variables, it's great for racing,” Ambrose said.

"We controlled the race today. A Stone Brothers Racing one-two… we are the top team and we are delivering at the moment.

Regarding Ritter’s spin, Ambrose said: "At the time I was all suited up and ready to go back into the car.

"It was always clear to us there were going to be many Safety Cars and one of them really helped us. We predicted it and were prepared for it.”