On this day: The ‘awkward’ teammate controversy 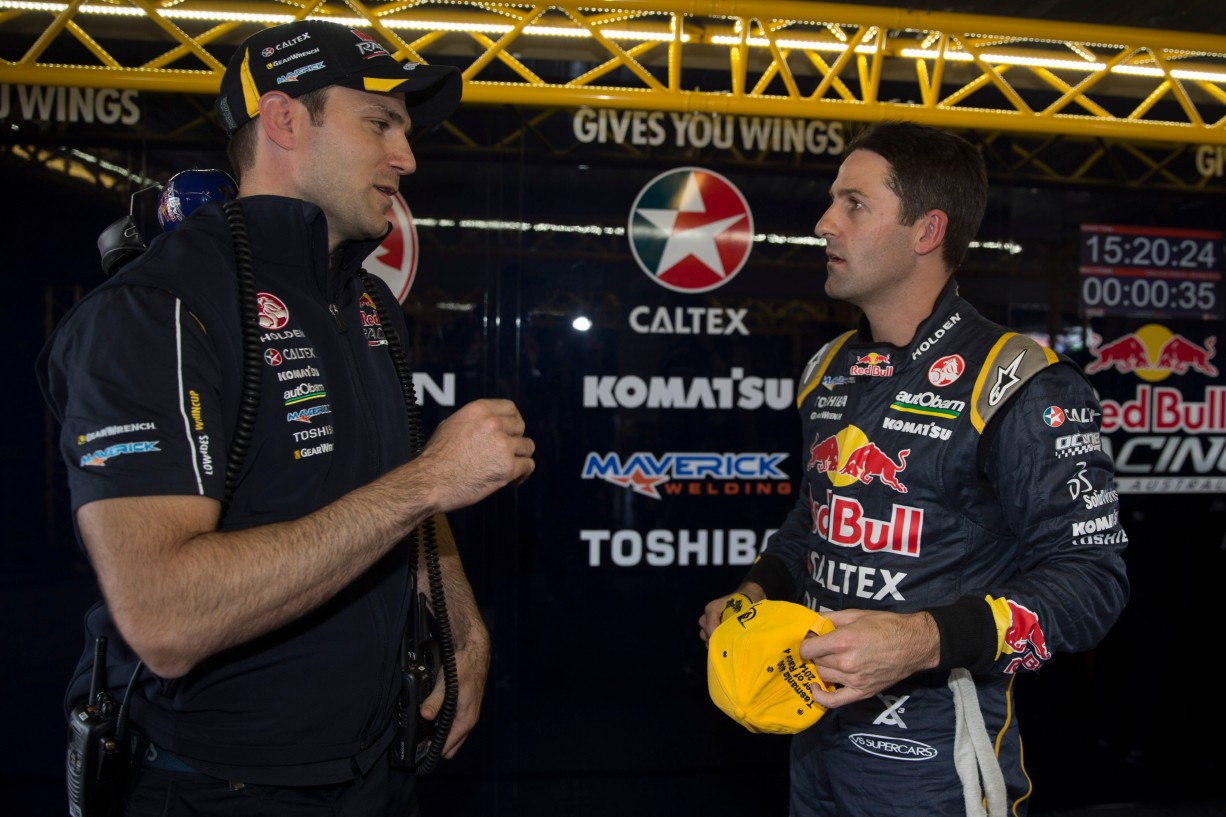 It’s one thing to make contact with your teammate. It’s another thing to do it fighting for victory.

On this day in 2014, Jamie Whincup committed the cardinal sin of racing; that is, don’t take out your teammate.

Symmons Plains, which is the next stop on the 2021 Repco Supercars Championship calendar, has been a Triple Eight bullring of sorts.

The team has won a staggering 20 races at the Tasmanian venue, including a sweep of the three races in 2014.

The first of the three races, held on March 29, saw pole man Whincup lose the lead to Lowndes on the run to Turn 1.

The resultant contact saw Lowndes shuffled wide, with Whincup carrying on into the lead.

"That’s what they don’t want inside a single-team garage," Neil Crompton said in commentary.

"As Craig goes to turn in, it’s unavoidable at that point not to make contact." 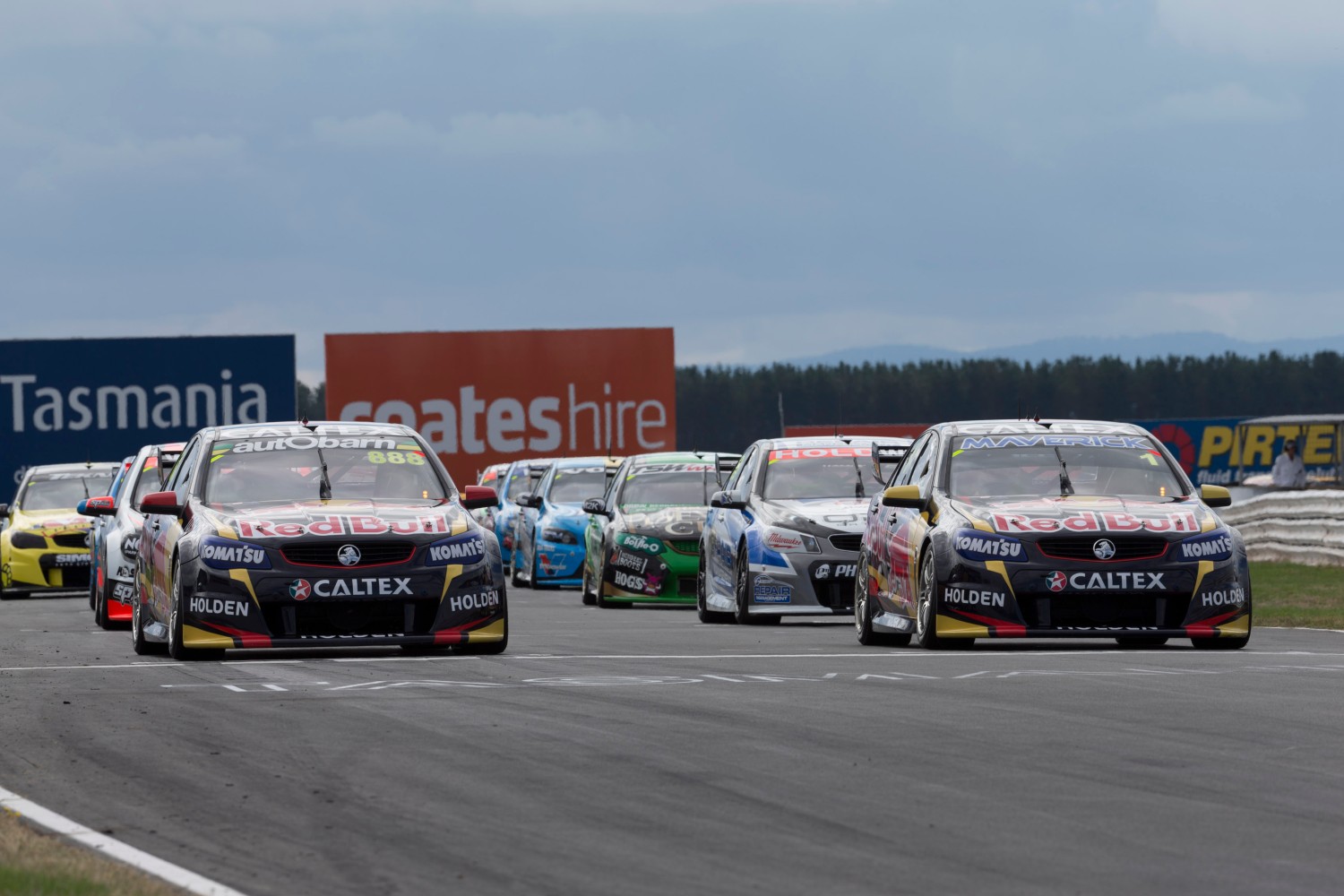 The two Red Bulls on the front row

Skaife reaffirmed that Whincup was up far enough to “command track position”, which was echoed by the stewards.

The incident was investigated after the race, and no penalty was applied.

It did little to help Lowndes, who plummeted to as low as 11th before recovering to eighth by race’s end.

Whincup clung on to the win ahead of James Courtney, with Mark Winterbottom, who won at the circuit four years earlier, completing the podium.

With Lowndes entering the race as the championship leader, Whincup, despite clinching his second win in four starts in 2014, couldn’t escape the lowly feeling.

However, Whincup was adamant the move was on. 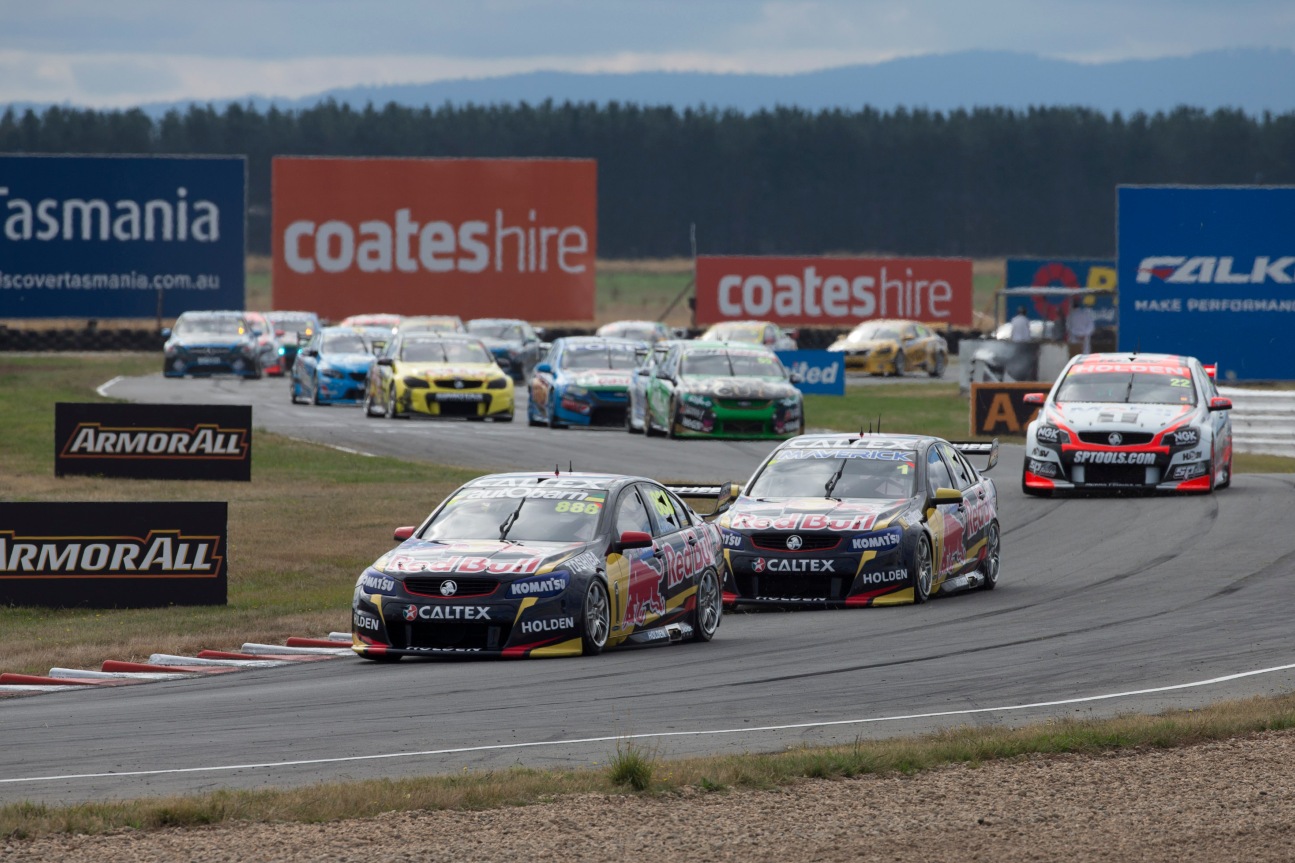 "It's an unfortunate situation," he said after the race.

"Lowndesy deserved to finish higher than that but I’m not sorry about the move or anything.

"It was textbook move... I was up the inside and was well and truly in there.

"It was a standard move, but unfortunately that is the way it goes. It's disappointing we didn't have a one-two.”

Whincup won the second race of the day, with Lowndes recovering from a rear-of-grid start to finish eighth. 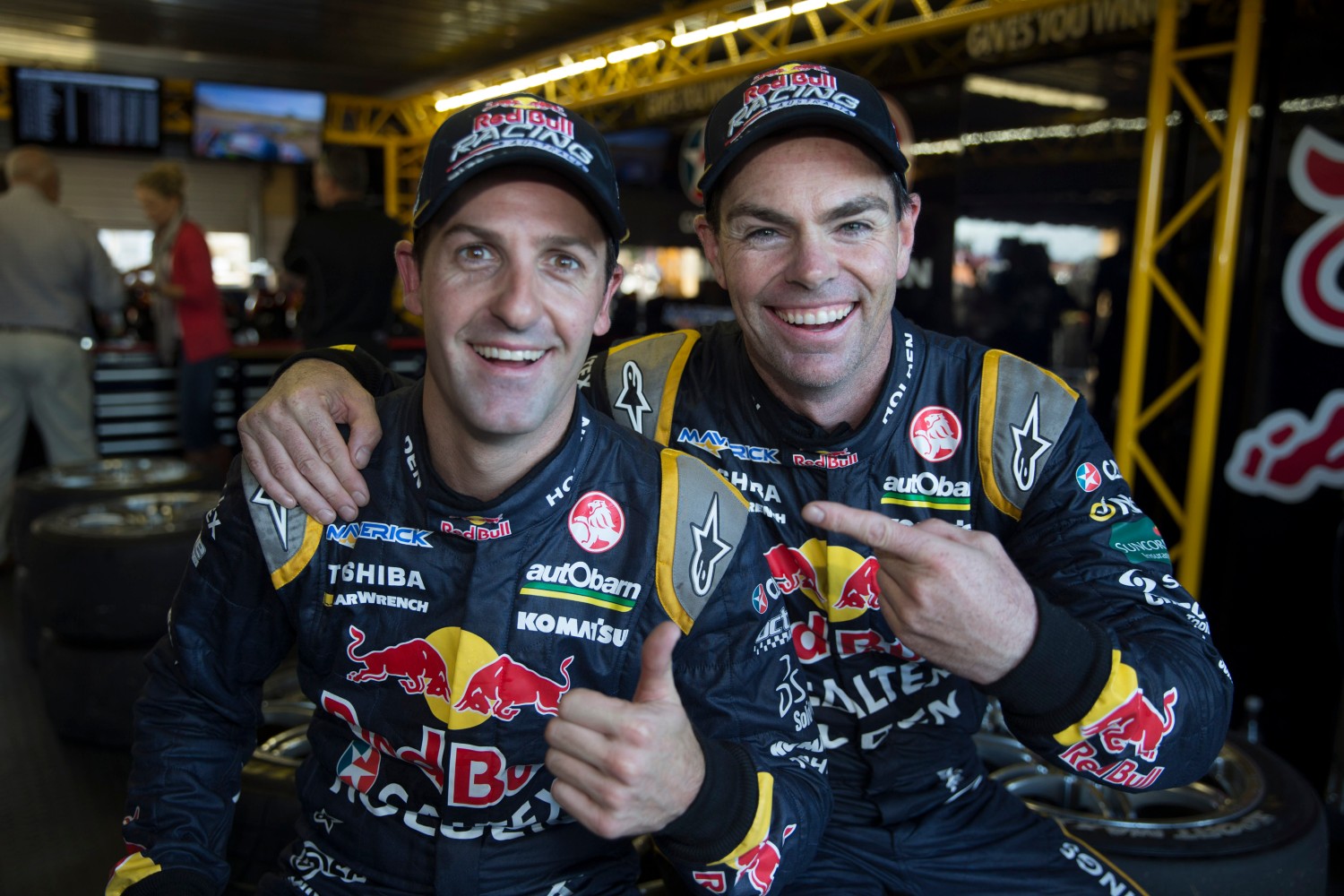 The two drivers recovered quickly from the drama

Unfazed by the previous day’s drama, Lowndes returned on Sunday to extend his championship lead with his second win of the year, with Whincup completing a one-two.

It should have been the second one-two of the weekend, with Whincup later explaining to Supercars.com that the intra-team incident was the “low” of his championship-winning campaign.

"Not a proud moment in my racing career," he said.

"I branded it last year, and I'm still of the same opinion, that was the low of the year.

"Lowndesy and I have been running door-to-door, wheel-to-wheel for 10 years and we've never actually tripped over each other. 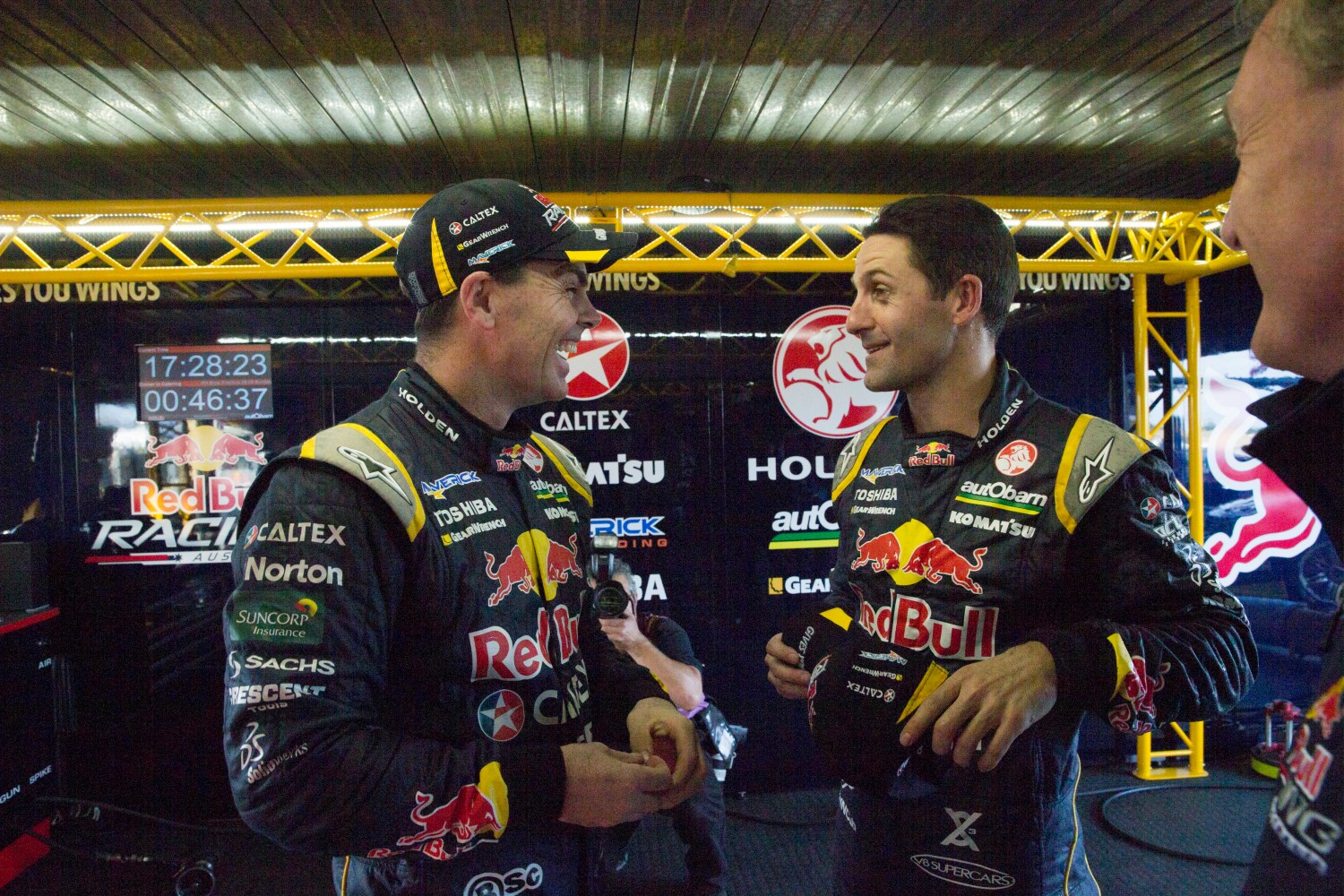 "We're not dwelling on that, we're over that now."

"Unfortunately that record isn't as squeaky clean… it isn't 100 per cent any more from Tassie, where I went for the pass up the inside and we really tripped over each other.

"I'm not blaming Craig, Craig's not blaming me, we should've given each other more racing room and we had an incident.

"We're not dwelling on that, we're over that now, and as I said at the time, hopefully that doesn't happen again.”